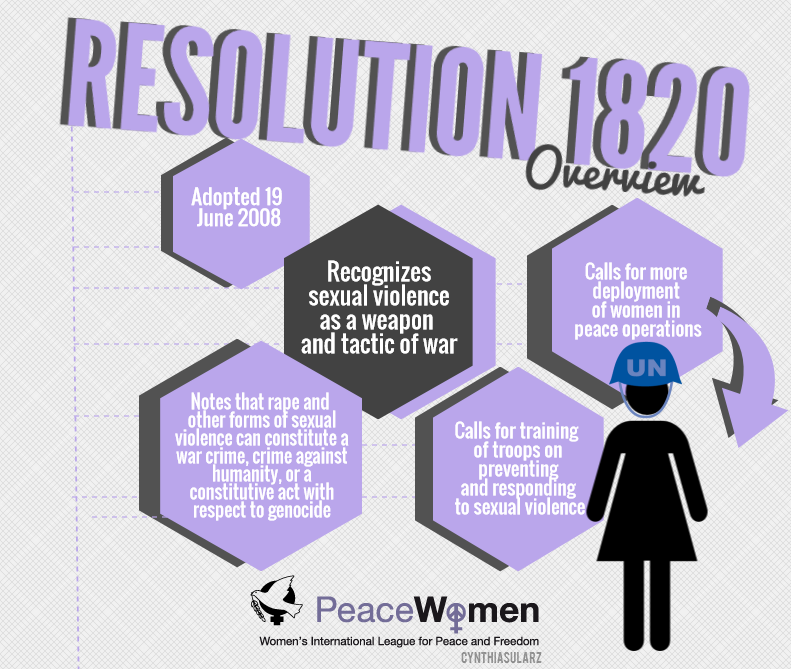 Reaffirming also the resolve expressed in the 2005 World Summit Outcome Document to eliminate all forms of violence against women and girls, including by ending impunity and by ensuring the protection of civilians, in particular women and girls, during and after armed conflicts, in accordance with the obligations States have undertaken under international humanitarian law and international human rights law;

Recalling the commitments of the Beijing Declaration and Platform for Action (A/52/231) as well as those contained in the outcome document of the twenty-third Special Session of the United Nations General Assembly entitled “Women 2000: Gender Equality, Development and Peace for the Twenty-first Century” (A/S-23/10/Rev.1), in particular those concerning sexual violence and women in situations of armed conflict;

Noting that civilians account for the vast majority of those adversely affected by armed conflict; that women and girls are particularly targeted by the use of sexual violence, including as a tactic of war to humiliate, dominate, instill fear in, disperse and/or forcibly relocate civilian members of a community or ethnic group; and that sexual violence perpetrated in this manner may in some instances persist after the cessation of hostilities;

Recalling its condemnation in the strongest terms of all sexual and other forms of violence committed against civilians in armed conflict, in particular women and children;

Recalling the inclusion of a range of sexual violence offenses in the Rome Statute of the International Criminal Court and the statutes of the ad hoc international criminal tribunals,

Deeply concerned also about the persistent obstacles and challenges to women’s participation and full involvement in the prevention and resolution of conflicts as a result of violence, intimidation and discrimination, which erode women’s capacity and legitimacy to participate in post-conflict public life, and acknowledging the negative impact this has on durable peace, security and reconciliation, including post-conflict peacebuilding,

Recognizing that States bear primary responsibility to respect and ensure the human rights of their citizens, as well as all individuals within their territory as provided for by relevant international law,

Reaffirming that parties to armed conflict bear the primary responsibility to take all feasible steps to ensure the protection of affected civilians,

Welcoming the ongoing coordination of efforts within the United Nations system, marked by the inter-agency initiative “United Nations Action against Sexual Violence in Conflict,” to create awareness about sexual violence in armed conflicts and post-conflict situations and, ultimately, to put an end to it,

1. Stresses that sexual violence, when used or commissioned as a tactic of war in order to deliberately target civilians or as a part of a widespread or systematic attack against civilian populations, can significantly exacerbate situations of armed conflict and may impede the restoration of international peace and security, affirms in this regard that effective steps to prevent and respond to such acts of sexual violence can significantly contribute to the maintenance of international peace and security, and expresses its readiness, when considering situations on the agenda of the Council, to, where necessary, adopt appropriate steps to address widespread or systematic sexual violence;

2. Demands the immediate and complete cessation by all parties to armed conflict of all acts of sexual violence against civilians with immediate effect;

4. Notes that rape and other forms of sexual violence can constitute a war crime, a crime against humanity, or a constitutive act with respect to genocide, stresses the need for the exclusion of sexual violence crimes from amnesty provisions in the context of conflict resolution processes, and calls upon Member States to comply with their obligations for prosecuting persons responsible for such acts, to ensure that all victims of sexual violence, particularly women and girls, have equal protection under the law and equal access to justice, and stresses the importance of ending impunity for such acts as part of a comprehensive approach to seeking sustainable peace, justice, truth, and national reconciliation;

6. Requests the Secretary-General, in consultation with the Security Council, the Special Committee on Peacekeeping Operations and its Working Group and relevant States, as appropriate, to develop and implement appropriate training programs for all peacekeeping and humanitarian personnel deployed by the United Nations in the context of missions as mandated by the Council to help them better prevent, recognize and respond to sexual violence and other forms of violence against civilians;

7. Requests the Secretary-General to continue and strengthen efforts to implement the policy of zero tolerance of sexual exploitation and abuse in United Nations peacekeeping operations; and urges troop and police contributing countries to take appropriate preventative action, including pre-deployment and in-theater awareness training, and other action to ensure full accountability in cases of such conduct involving their personnel;

8. Encourages troop and police contributing countries, in consultation with the Secretary-General, to consider steps they could take to heighten awareness and the responsiveness of their personnel participating in UN peacekeeping operations to protect civilians, including women and children, and prevent sexual violence against women and girls in conflict and post-conflict situations, including wherever possible the deployment of a higher percentage of women peacekeepers or police;

9. Requests the Secretary-General to develop effective guidelines and strategies to enhance the ability of relevant UN peacekeeping operations, consistent with their mandates, to protect civilians, including women and girls, from all forms of sexual violence and to systematically include in his written reports to the Council on conflict situations his observations concerning the protection of women and girls and recommendations in this regard;

10. Requests the Secretary-General and relevant United Nations agencies, inter alia, through consultation with women and women-led organizations as appropriate, to develop effective mechanisms for providing protection from violence, including in particular sexual violence, to women and girls in and around UN managed refugee and internally displaced persons camps, as well as in all disarmament, demobilization, and reintegration processes, and in justice and security sector reform efforts assisted by the United Nations;

11. Stresses the important role the Peacebuilding Commission can play by including in its advice and recommendations for post-conflict peacebuilding strategies, where appropriate, ways to address sexual violence committed during and in the aftermath of armed conflict, and in ensuring consultation and effective representation of women’s civil society in its country-specific configurations, as part of its wider approach to gender issues;

12. Urges the Secretary-General and his Special Envoys to invite women to participate in discussions pertinent to the prevention and resolution of conflict, the maintenance of peace and security, and post-conflict peacebuilding, and encourages all parties to such talks to facilitate the equal and full participation of women at decision-making levels;

13. Urges all parties concerned, including Member States, United Nations entities and financial institutions, to support the development and strengthening of the capacities of national institutions, in particular of judicial and health systems, and of local civil society networks in order to provide sustainable assistance to victims of sexual violence in armed conflict and post-conflict situations;

14. Urges appropriate regional and sub-regional bodies in particular to consider developing and implementing policies, activities, and advocacy for the benefit of women and girls affected by sexual violence in armed conflict;

16. Decides to remain actively seized of the matter."