This 123 edition of PeaceWomen ENews features women, peace and security news, events and resources from peacewomen.org. The last PeaceWomen ENews focused on the 55th Session of CSW. (click here for full version).

Last week, we marked the 100th anniversary of International Women's Day (March 8, 2011). A centennial of International Women's Day seems like a historic milestone in some ways, yet the reality of this day is less about celebrating and more about solidarity with women and girls around the world who are struggling to overcome oppression and marginalization, and work towards a just world based on equality and dignity.

WILPF's International Women Day statement reaffirmed that we are united in recognition of women who are working to bring about change through peaceful, non-violent, participatory action. We expressed our support for women organizing and struggling for their rights around the world, including the recent events in North Africa and the Middle East. We demanded women's full participation and leadership in peace-making process around the world, particularly in conflict area and occupied territories. Furthermore we used the statement as an opportunity to “urge all States to engage women's organizations in the development and implementation of comprehensive National Action Plan process on Security Council Resolution 1325 (Women, Peace and Security), and that these plans integrate a human rights and full disarmament approach.” Please see full WILPF statement and the special ecard that was distributed to WILPF members.

To advance the interlinkages between WILPFs primary areas of work, we organized an annual seminar connecting the topics of women and disarmament. The seminar took place in the on 7th March 2011 with WILPF members from many sections traveling to Geneva to bring their voice directly to policy makers. 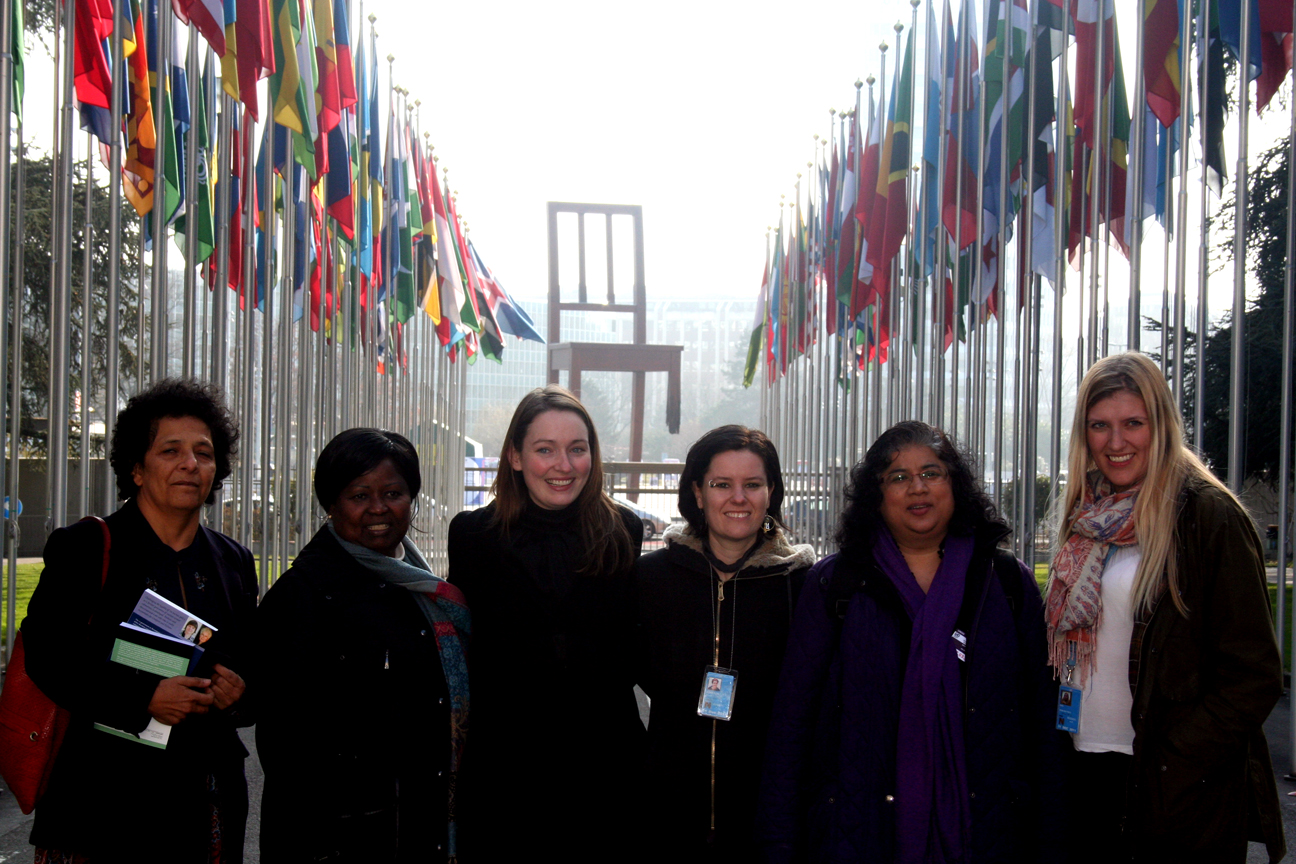 In addition to the seminar, on March 8, WILPF delivered a statement on International Women's Day to the Conference on Disarmament which focused on the necessity of integrating gender perspectives into disarmament and arms control measures. Read CD Statement.

WILPF also co-hosted a side event to the Human Rights Council on March 9th with partner NGOs (on the subject of “Women - Right to Food, Food Security, Food Sovereignty”.

Before the events in Geneva, WILPF engaged actively at the annual Commission on the Status of Women in New York (CSW). WILPF was represented by WILPF member, US-WILPF practicum participates and the PeaceWomen team. See more WILPF events and CSW below.

Parallel to the CSW in New York (Feb 28- Mar 4), the second preparatory committee for the UN negotiations on an arms trade treaty (ATT) also took place. Emma Rosengren (WILPF) summarized that although an ATT will be focused on regulating the international trade of conventional weapons, it is important that this opportunity is seized to include women's experiences of war and armed violence. The delegations of Australia, Norway, Tanzania, the United Kingdom, and the Pacific Small Island Developing States suggested that the treaty address the disparate impact armed conflict has on women, and henceforth include a gender perspective in its provisions, in accordance with the relevant UN Security Council Resolutions. To read further on the ATT and its gender dimensions, see the work and articles of WILPF's project, www.ReachingCriticalWill.org.

News articles featured this month include news related to the March 12th march where several thousand Libyan women joined on the streets of rebel-held Benghazi, demanding a no-fly zone to stop dictator president Moammar Gaddafi from bombing rebel fighters. Recent news also covers the tragic bloodshed that took place during a peaceful demonstration in Côte d'Ivoire when soldiers of former President Laurent Gbagbo opened fire on the women peaceful marching. The women of Côte d'Ivoire stood together on International Women's Day, less than a week after the murders of seven women at the demonstration. According to investigations conducted by UN human rights officers in the country, at least 392 people have been killed in Côte d'Ivoire since mid-December, including at least 27 in just the past week.

The month's Enews features resources including the Women and Law Enforcement in Zimbabwe Report produced by IDASA (An African Democracy Institute), and the Research and Advocacy Unit (RAU).

The PeaceWomen Project and the Women's International League for Peace and Freedom, extend our sincere condolences and support to families, friends, and colleagues in Japan. Our thoughts and prayers are with the people of Japan, a country that is home to many members of our community. See WILPF statement on Japan Crisis>>

55th Session of the Commission on the Status of Women

The 55th Session of the Commission on the Status of Women took place at United Nations Headquarters in New York from Tuesday, 22 February to Friday, 4 March 2011. The theme of this session was “Access and participation of women and girls in education, training, science and technology, including for the promotion of women's equal access to full employment and decent work.” Representatives from Member States, the United Nations and the civil society gathered to discuss the theme of this session. In addition to the official CSW events and the United Nations' parallel events; civil society arranged hundreds of panels, workshops and session. The many events held during these two weeks, provided a unique forum for the global civil society to voice issues regarding gender, education, science and technology.

WILPF also partner with Global Action to Prevent War (GAPW) and Soka Gakk to host a reception and discussion on peace activism and women's leadership on Feb 24th with Felicity Hill and Gillian Kitley. See summary and video>>

In addition to our events, PeaceWomen tracked other women, peace and security (WPS) related events. We approximate that seventy events during CSW 55 involved the women, peace and security (WPS) agenda. The official theme of CSW 55 intersected with WPS mainly with regard to the full implementation of SCR 1325 (2000), the participation of women in peace processes and all decision-making, the protection of women during conflict and how education and ICT-training can empower both women and men to further strengthen the pursuit of this agenda.

On 11 February 2011, the Security Council held a day-long Open Debate on the Maintenance of International Peace and Security – the Interdependence between Security and Development. The debate featured statements from the Secretary-General, the permanent and nonpermanent members of the Council, 60 other delegations, the AU and EU, the Chair of the Peacebuilding Commission (PBC), as we

ll as the World Bank. Sarah Cliffe, Special Representative of the World Bank, briefed the Council on the findings of the 2011 World Development Report. The Security Council adopted Presidential Statement S/2011/4, which Brazil delivered as President of the Council. The Presidential Statement (PRST) cited the need for women to be "active participants in all stages of peacebuilding, peace agreements and development programmes.”

UN Women - A Catalyst for Change

On January 24th 2011, The launch event for UN Women, Honouring the Past – Envisioning the Future for Women and Girls, was hosted by Ms. Michelle Bachelet, Under-Secretary-General and Executive Director, UN Women. It was emceed by Ms. Juju Chang, news anchor of ABC's Good Morning America, with other distinguished speakers and performers.

Bandana Rana of Saathi-Nepal and GEAR Campaign Focal Point made a statement as representative of civil society at the event.
Michelle Bachelet laid out a 100-day action plan today, embracing a full spectrum of issues from supporting national partners to promoting coherence within the UN system. In her remakes, she stated that UN Women will focus on five areas:

UN Women Executive Director Michelle Bachelet commemorated the 100th anniversary of International Women's Day (IWD) with a visit to Liberia's capital, Monrovia, where she engaged with women demonstrating leadership in rebuilding the country from the conflict that dominated its recent history.In her address she stated that; “This year's theme for International Women's Day challenges us to think critically about women and girls' access to education, training, science and technology,” she said. “Gender equality and the empowerment of women can only become a reality if we put the necessary resources into education and training for women and girls.” 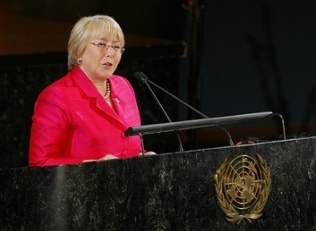 Take action! The need to make women, peace and security resolutions accessible and relevant to women on the ground is more urgent than ever.

Join our "Speak Local Campaign" today. PeaceWomen needs your help to translate SCR 1820 into your language(s) to promote local ownership and women's participation in conflict prevention, protection and peace-building. Your work will be acknowledged on our site and will help raise awareness.

The year, 2011, marks the 100th anniversary of International Women's Day. The day was first commemorated on 19 March 1911 in Austria, Denmark, Germany and Switzerland, following its establishment during the Socialist International meeting the prior year. More than one million women and men attended rallies on that first commemoration. To read more about the history, click here>>

International Women's Day is an occasion marked by women and women's groups around the world to celebrate the achievements we have made in addition to addressing the struggles we continue to face and what needs to be done to move forward.

WILPF's statement reaffirmed: that “the core message of our work at WILPF is that we are driven by the attainment of peace and human dignity and we believe that women are central to that process. Furthermore, we underline that this aim and this belief in women directs us to challenge existing paradigms of thought and structures of power. Now, at the centennial of International Women's Day, is the time for solidarity and action to challenge the status quo, which is embedded in patriarchy and systems of dominance.”

Please see full WILPF statement and the special ecard that was distributed to WILPF members.