16 Years after UNSCR 1325: Will the Future Ever be Feminist? 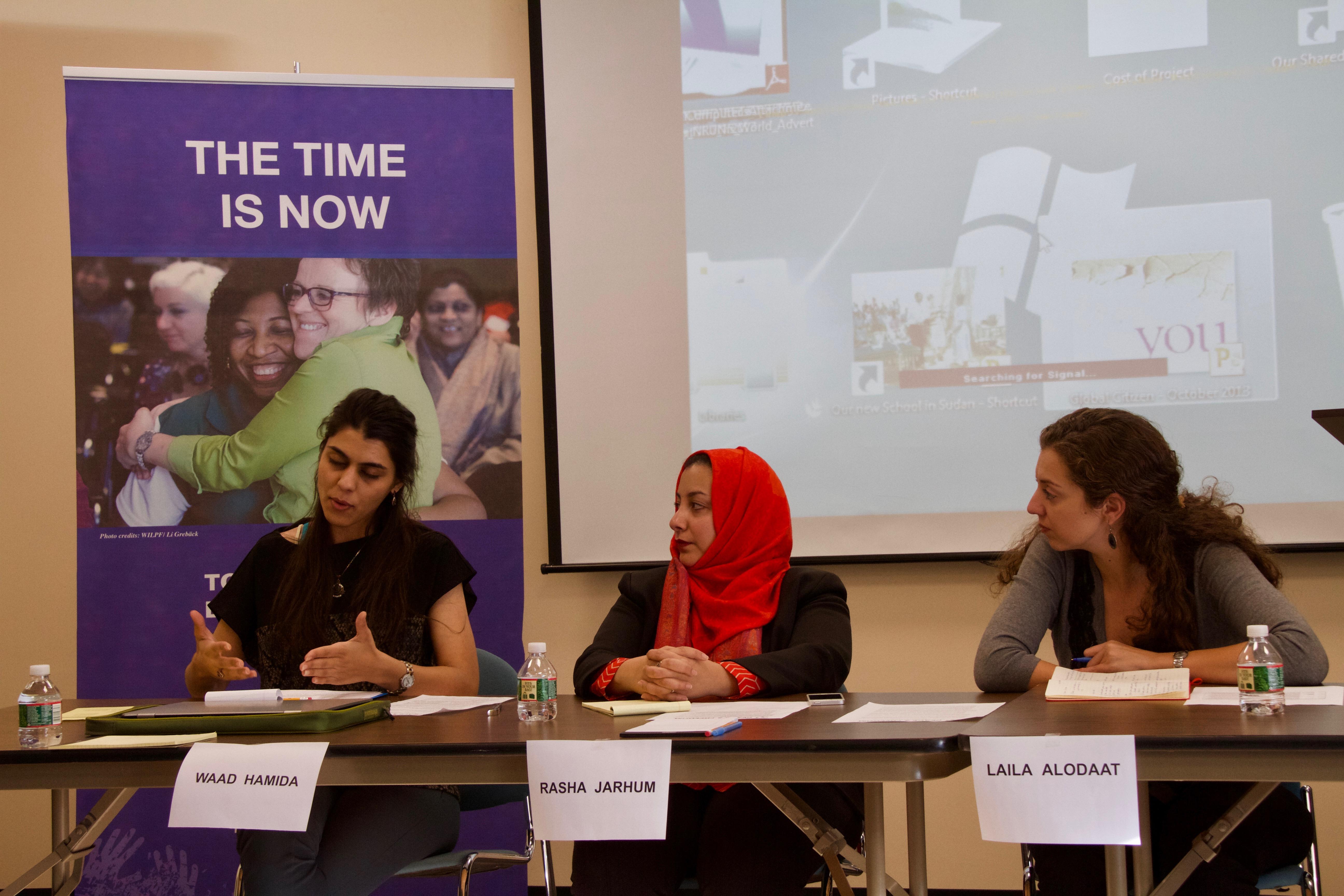 As one of seven women civil society leaders to participate in the Yemeni peace talks, Rasha Jarhum’s expertise, experience, networks, and commitment make her a formidable leader. Her sparkling honey coloured eyes, kind but critical demeanour, and intense gaze are part of a powerful presence.

A few weeks ago, Rasha joined WILPF’s delegation to New York to call for accountability on the Women, Peace and Security Agenda. However, 16 Years after the adoption of UNSCR 1325 and one year after the Global Study on UNSCR 1325, the gap between commitments and accomplishments is becoming nothing short of absurd.

After concerted campaigns for the first ever woman and feminist woman UN Secretary General, the UN confirmed on 13 October another man, and then on 21 October announcedWonder Woman as honorary ambassador for women and girls. A few short weeks later, and just months after Brexit, the U.S. elected Donald Trump as president.

When women leaders are so so consistently sidelined despite all qualifications and men continue to be validated no matter what their qualifications or temperament, and when creeping militarism through police, aid, peacekeeping and rollback of women’s social and economic rights continue, the promise of gender equality and peace begin to look like a joke.

In today’s world, it is becoming clearer by the minute that we are tilting toward a world defined by, for, and about strong-men. In the current climate of fear, many people are sliding into reactive action based on triggered biases rather than pro-active approaches based on thoughtful analysis for longer-term strategic action. This reactive approach tends toward dividing the world between “us” and them” and tends to condone command and control action against “evil” (them) for “good” (us), based on groups based on race, religion, or sexual orientation and gender identity.

It is critical that we not succumb to a constantly reactive crisis response cycle based on implicit and explicit biases. Instead, we must cultivate democratic inclusion and social justice for collaborative action, long term conflict prevention, and sustainable peace. We must take action to transform violent masculinities, take down the stranglehold of the military-industrial complex, and re-think economic policy for social justice including through participatory and social solidarity economic alternatives aimed at community resilience rather than profit. We must re-set the peace table with women peace making peace rather than men with guns dividing power, finance women-led civil society’s important work, and take action to #MoveTheMoney from war to peace.

It is critically urgent for all of us to step up our game. We must mobilise, build our communities, and support each other in our demands for social justice.

Another world is possible. We need all of us to turn the tide.

WILPF PeaceWomen's October Delegation on the 16th Anniversary of UNSCR1325 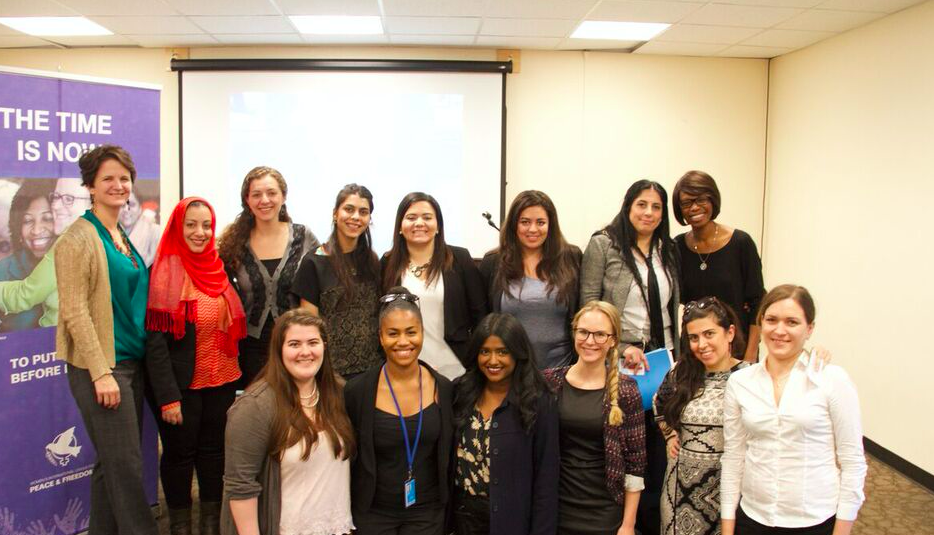 WILPF International and a special delegation of women peace leaders from Syria, Yemen, and Libya at the 16th Anniversary of UNSCR1325. (Photo: WILPF/Marina Kumskova)

This October marked 16th Anniversary of United Nations Security Council Resolution (UNSCR) 1325 and the broader Women, Peace and Security (WPS) Agenda. During the week of the Security Council WPS Open Debate, WILPF hosted a delegation of women peace leaders including from Syria, Libya, Yemen, and Nigeria and engaged in a variety of events, bilateral meetings, and other engagements for concrete action.

WILPF also co-hosted an event on “Financing the Women, Peace and Security Agenda: Good Practice and Lessons Learned for Accountability and Implementation.”  The event built on WILPF’s launch of the #MoveTheMoney toolkit in September and focused on the importance of concrete action to finance the WPS Agenda in order to move from commitments to accomplishments. “We spend trillions on war and pennies on peace; and of course, you get what you pay for,” Abigail Ruane, WILPF PeaceWomen Programme Director, said.

Find more information about WILPF’s engagement at the 16th Anniversary of UNSCR 1325 here.

Inside the Security Council Open Debate on Women Peace and Security 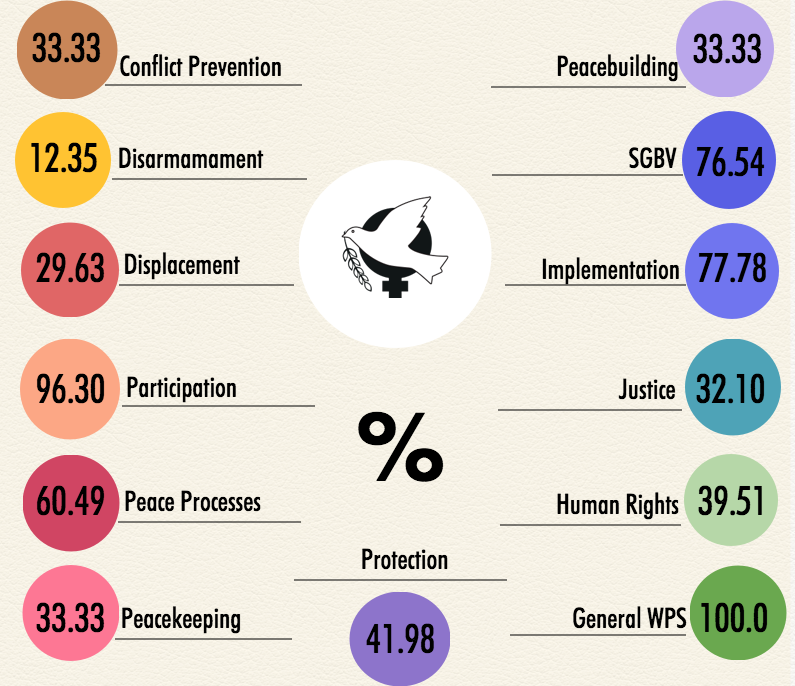 The annual United Nations Security Council open debate on Women Peace and Security (WPS) was convened, under the presidency of the Russian Federation, on 25 October 2016. One year after the Global Study on 1325, measuring action to move from commitments to accomplishments is critical. Prior to the debate Russia circulated a concept note calling upon Member States to focus their statements on the progress achieved in implementing commitments made in 2015. However, only 24 states out of 58  (41 percent) illustrated the action steps taken on their 2015 commitments. Of these, 11 states (45.8 percent) only followed up on some of their commitments, leaving one or more unmet. In fact, moving beyond rhetoric is a major gap which raises substantial questions about the seriousness with which stakeholders are addressing the WPS Agenda.

Despite consistent recognition by all three peace and security reviews in 2015 of the need for strengthened action on conflict prevention, conflict prevention and disarmament were absent from a majority of the statements. This disconnect demonstrates a level of negligence among states to acknowledge that the best prevention of conflict-related sexual violence and gender-based discrimination or injustice, is to prevent conflict from occurring in the first place.

Find the Full Debate Analysis  of the 2016 Open Debate on Women, Peace and Security here.

Find the Analysis of the WPS Commitments made at the 2016 Open Debate on Women, Peace and Security here. 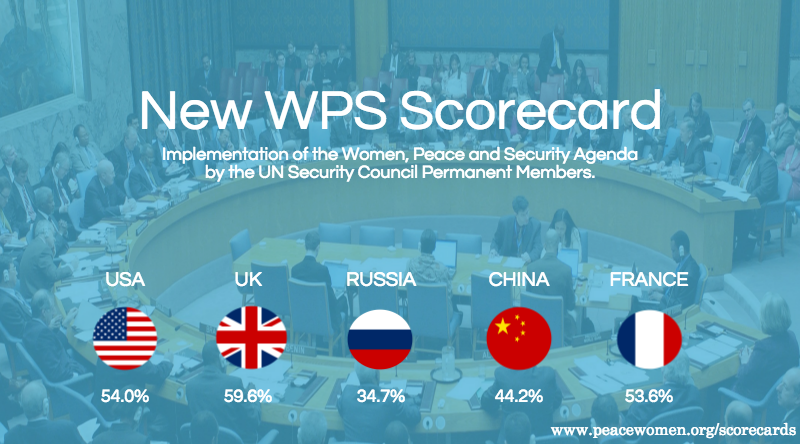 As part of our preparations for the 16th anniversary of UNSCR 1325, on 19 October 2016, WILPF PeaceWomen launched our WPS Security Council Scorecard to strengthen accountability on holistic implementation of the Women, Peace and Security (WPS) Agenda by the Permanent Five members of the Security Council -- United States, United Kingdom, France, Russia, China.

The WPS Security Council Scorecard includes a wealth of data from 2010 to 2015 addressing all four WPS pillars (participation, conflict prevention, protection, and relief and recovery). It includes international action including on statements and commitments at the Security Council, international gender and human rights commitments, and gender and peacekeeping action. It also includes national action on financing of military versus gender equality, women's participation in parliament and judiciary, levels of sexual violence, and gendered post-conflict stabilisation programmes.

The webinar launching the WPS Scorecard included grassroots activists and international advocates who highlighted disarmament as a critical component of conflict prevention and discussed the impact of militarisation on women in conflict-affected areas. Speakers invited participants to use the WPS Scorecard in their national advocacy to boost action from commitments to accomplishments.

Find the summary of the webinar launching the WPS Security Council Scorecard here. 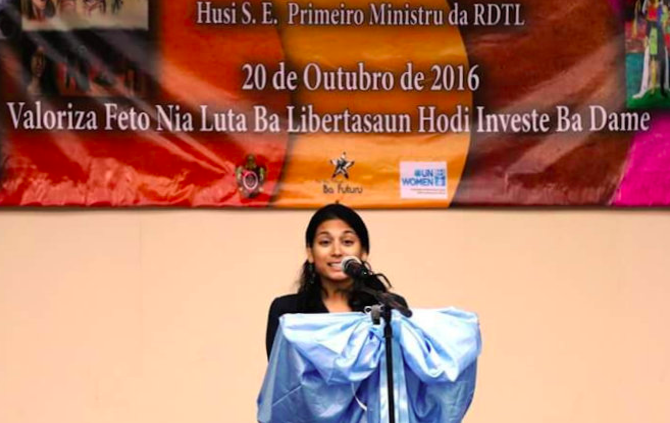 Every October, Member States are expected to strengthen their commitments to the Women, Peace and Security (WPS) Agenda, including by the launching and reviewing the implementation of the National Action Plans on the implementation of United Nations Security Council Resolution (UNSCR) 1325. However, this year only few countries have taken the opportunity to strengthen their calls for a holistic implementation of the WPS Agenda. At the annual UNSC Open Debate on WPS Kazakhstan, Czech Republic and Croatia committed to launching a NAP by the end of 2016, and Angola, Brazil, and Spain also stated that a NAP is being developed. Switzerland stated that they will be releasing a second NAP in 2017.

As one of only three countries in Southeast Asia to officially commit to the WPS Agenda, Timor Leste launched its National Action Plan (NAP) on 21 October 2016, right on time for the 16th Anniversary of the WPS Agenda. The NAP was approved by the National Council of Ministers in April of 2016 and its objectives correspond with the four pillars include: Participation, Prevention, Protection and Peacebuilding. The NAP was developed in consultations with civil society, including women's organisations and received financial and technical support from UN Women. An Independent Monitoring Committee (IMC) including members of the Parliament and NGO representatives will monitor the implementation of the Timor Leste NAP.

WILPF welcomes the recent developments with countries reaffirming their commitments to the WPS agenda through the development of new and revised NAPs dedicated to a holistic implementation of the WPS Agenda.

An Analysis Of Chapter Eleven Of The Global Study: Women, Peace and Security and the United nations Security Council 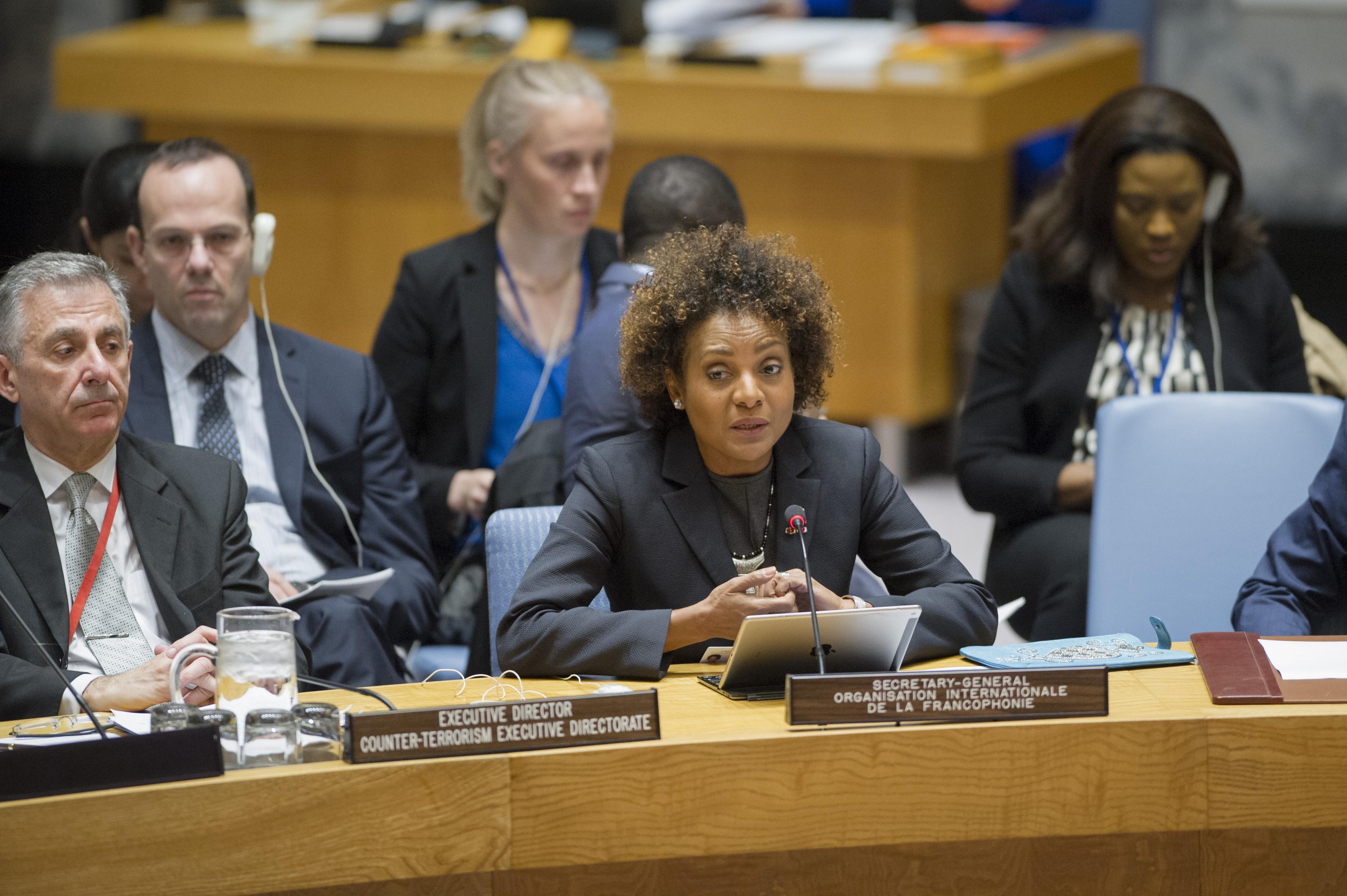 Chapter eleven of the Global Study on the implementation of UNSCR 1325 examines the WPS and the United Nations Security Council, including  its “conflict prevention toolbox.” It highlights that the Council has a conflict prevention role where the encouragement of women’s participation — both as a pillar and contributing factor — could significantly enhance conflict prevention. However, in practice the Security Council has rarely acted to proactively prevent conflict, and instead has focused largely on protection concerns, as reflected across its body of work.

The chapter argues that the Security Council's implementation of the WPS Agenda would be improved with dedicated high-level leadership on women, peace and security, as well as more consistent and accountable information flow from across the United Nations’ gender architecture. It is important to note that since the launch of the Global Study, the creation of the UNSCR 2242 Informal Expert Group (IEG 2242) has taken forward at least one key recommendation in this chapter.