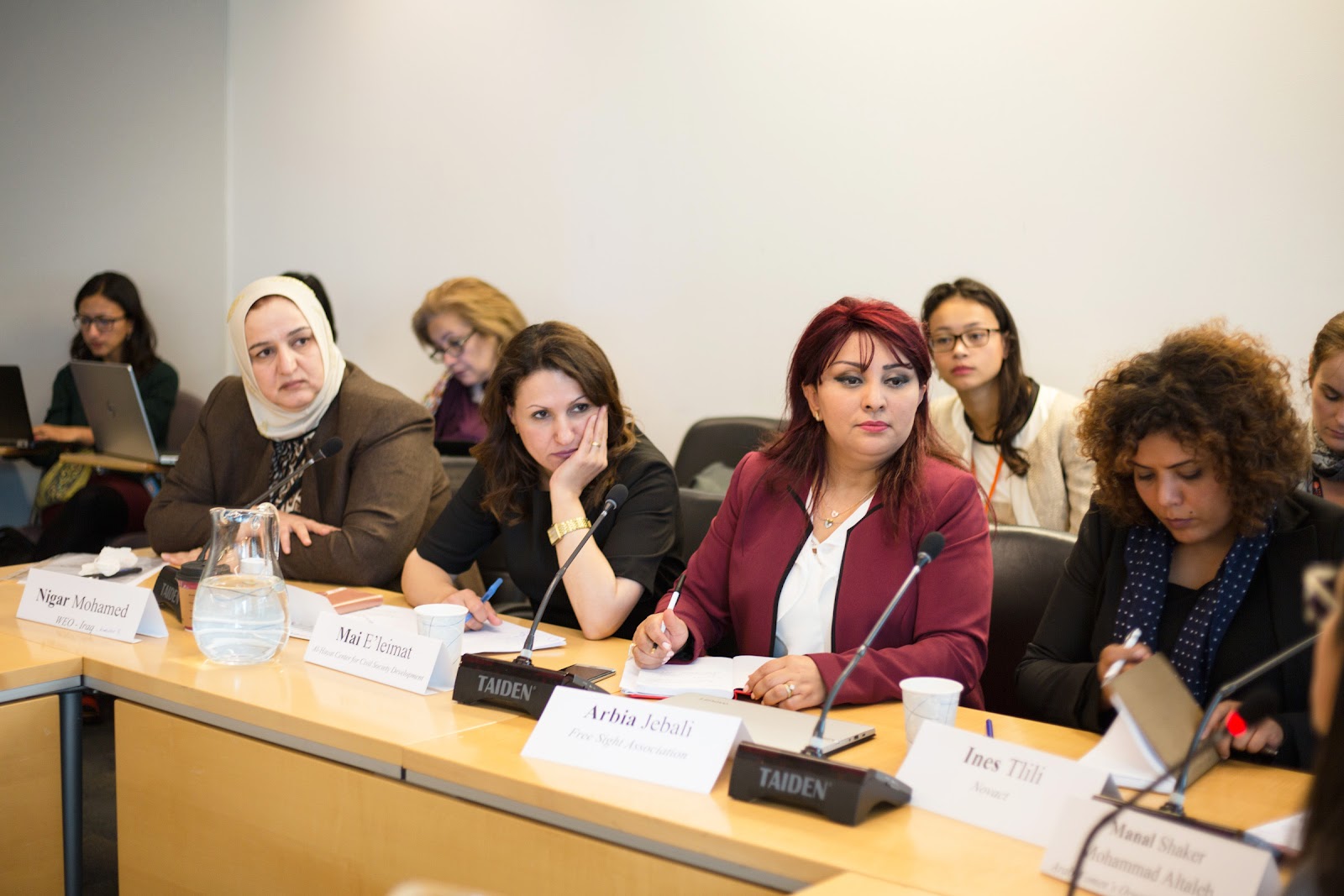 Panelists of the event titled “Pulling the Rug from Under Civil Society’s Feet - We Must Create Our Own Rugs!” on 26 October 2017 (Photo: Aleksandra Kojic)

On Thursday, 26 October 2017, a side event entitled, “Pulling the Rug from Under Our Feet: What is the UNSCR 1325 Without Civil Society Freedoms?” was hosted on the margins of the 17th anniversary of United Nations Security Council Resolution (UNSCR) 1325. The event was hosted by the Women Peacemakers Program (WPP) and the Dutch Mission, in collaboration with Duke Law’s International Human Rights Clinic, Al-Hayat Center for Civil Society Development, Arab Women Organisation of Jordan, NOVACT, Free Sight Association, Iraqi Al-Amal Association, Women Empowerment Organisation, NGO Working Group on Women, Peace and Security and Women’s International League for Peace and Freedom.

At a time where the normative support for the Women, Peace and Security (WPS) Agenda is higher than ever, the event aimed to bring attention to how securitised frameworks of counter-terrorism and militarism undermine women civil society and contribute to “shrinking civil society space”. The panelists and audience were invited to engage in a critical reflection on whether current civil society WPS strategies suffice to address these new realities.

As Isabelle Geuskens, Executive Director of WPP, pointed out in the beginning of the session, substantial progress on the WPS Agenda has been made during the last 17 years: it has a high level of normative support and more recognition than ever before. However, holistic implementation remains a challenge, especially because the key leaders of the Agenda -- the feminist movement -- face “shrinking space” and direct attacks. The obstacles to women’s meaningful participation and action are seen from reducing opportunities for local civil society in the United Nations Security Council to huge cuts in direct funding for women’s organisations to increased military spending and to criminalisation and restrictions of women human rights defenders and feminist peace activists.

Louise Allen, Executive Coordinator of the NGO Working Group on Women, Peace and Security (NGO WG), provided the New York context for action on UNSCR 1325 in 2017. Some progress made in increasing civil society speakers’ access to the Council, specifically around the access of women activists from conflict or post-conflict states, such as Somalia, South Sudan, Yemen and others in the MENA region. However, women’s meaningful participation continues to face daunting challenges. “The WPS Agenda has become increasingly politically-loaded, where states do not want to hear recommendations or complaints from civil society actors, but rather want to hear victims tell their sob stories”, noted Allen. This belittles the work of the feminist peace movement at the grassroots level by relegating their role to that of token, downtrodden victims. As the most recent open letter for this year’s open debate suggests, ensuring women’s meaningful participation is critical, including in the operationalisation of peace operations, where only 20% of peace operations reports mention any engagement with civil society.

Jayne Huckerby of the International Human Rights Clinic at Duke University School of Law, along with Isabelle Geuskens of WPP, proceeded to discuss key findings of the report entitled “Tightening the Purse Strings: What Countering Terrorism Financing Costs Gender Equality and Security”, published by Duke Law and WPP. The report outlines the ways in which the recent counter-terrorism financing (CTF) rules have been designed and implemented take little to no account of these features of women-led organisations and the environments in which they operate. In practice, legal and regulatory CTF frameworks often restrict transnational financial flows (e.g., from Western donors to grassroots groups); involve heavy compliance requirements; cause delays in, or block receipt of, funds; favor established and often international organisations; call for detailed information on civil society’s activities, including in some cases beneficiaries; and decrease the risk appetite of donors and banks, all of which severely impact women’s organising power for peace on the ground and around the world.

Diana Salcedo, the Deputy Director of WILPF Colombia, spoke about her organisation’s experience with civil society’s “shrinking space” within the context of the Colombian peace process. The Colombian context shows how it is not just counter-terrorism initiatives that pull the rug from under women civil society’s work, but militarised security initiatives more broadly. In the Colombian context, militarism and 50 years of conflict have left the country with extensive arms proliferation which directly contributed to femicide and sexual, gender-based and other forms of violence against women. Even though the peace accord is seen as the most progressive agreement out there, there are still limited spaces for women’s participation within the agreement. “Colombia stills need to overcome its macho, patriarchal structure”, she argued.  Although the FARC-EP has laid down about 10000 arms, legally- and illegally-obtained firearms still pose a real risk for women, confine their livelihoods and prevent them from meaningfully participating in politics and society. This is especially true for women who are working in the countryside, who are targets of threats or victims of violence and for women human rights defenders. Lastly, she recounted the difficulty her office faces when transferring funds from Bogota to the countryside where they work. Security issues come up for instance when renting a conference room in the countryside because they have to pay cash and carry large amounts of cash while traveling. Often women’s organisations do not have a proper finance department which can deal with payments and meeting donor requirements, so these organisations have to beg for donors or vendors’ flexibility, which may not happen.

Diana’s statement was followed by a round-table discussion with the representatives of women-led organisations from Tunisia, Jordan and Iraqi Kurdistan. This roundtable provided insights into the struggles many civil society organisations face in keeping their operations afloat. These challenges include the impact of banking regulations, which are making it increasingly difficult to receive funds timely - or at all - for donor-approved projects; donors’ extensive application and reporting requirements, which make direct access to funding a challenge for many women-led organisations on the ground; the fact that international non-governmental organisations (NGOs) are increasingly coming in and competing for funding or are subcontracting local groups, which undermines the building of a strong locally-owned women’s movement for peace and justice; discriminatory banking regulations, such as not being able to open a business bank account; transparency requirements, which often puts their workers or beneficiaries at risk; as well as increasingly restrictive NGO regulations imposed by the government, such as the requirement to budget for male companions to accompany women for work-related travel; and general prejudice towards empowering women, which is seen as a red flag by local and national governments.

During the Q&A session, the representatives from other women-led organisations shared their frustrations with similar barriers to entry into the international NGO sphere, voiced their ire with the belittling and relegation of women’s participation in policy fora to that of a victim or a token, and stressed the importance of holding their own governments and the United Nations accountable.

If the shrinkage of the already limited space for organisations that work on WPS will continue, the Agenda’s effective implementation is not possible. In order to combat “shrinking spaces”, women-led organisations must work together to push back against restrictive policies and create a more substantive dialogue with donors where small and mid-size grassroots women-led organisations are not seen just as “service providers”, but have real engagement on their own terms with donors, and can work in a truly supportive partnership relation that enables them to do the effective work on the ground that is needed. Equally, the “Friends of 1325” must recognise that they must not give with one hand while taking with the other, and take measures to ensure that any security action taken does not undermine women civil society. They should also substantially strengthen political, financial and other support for the important work that the women’s peace movement does for accountability and action.