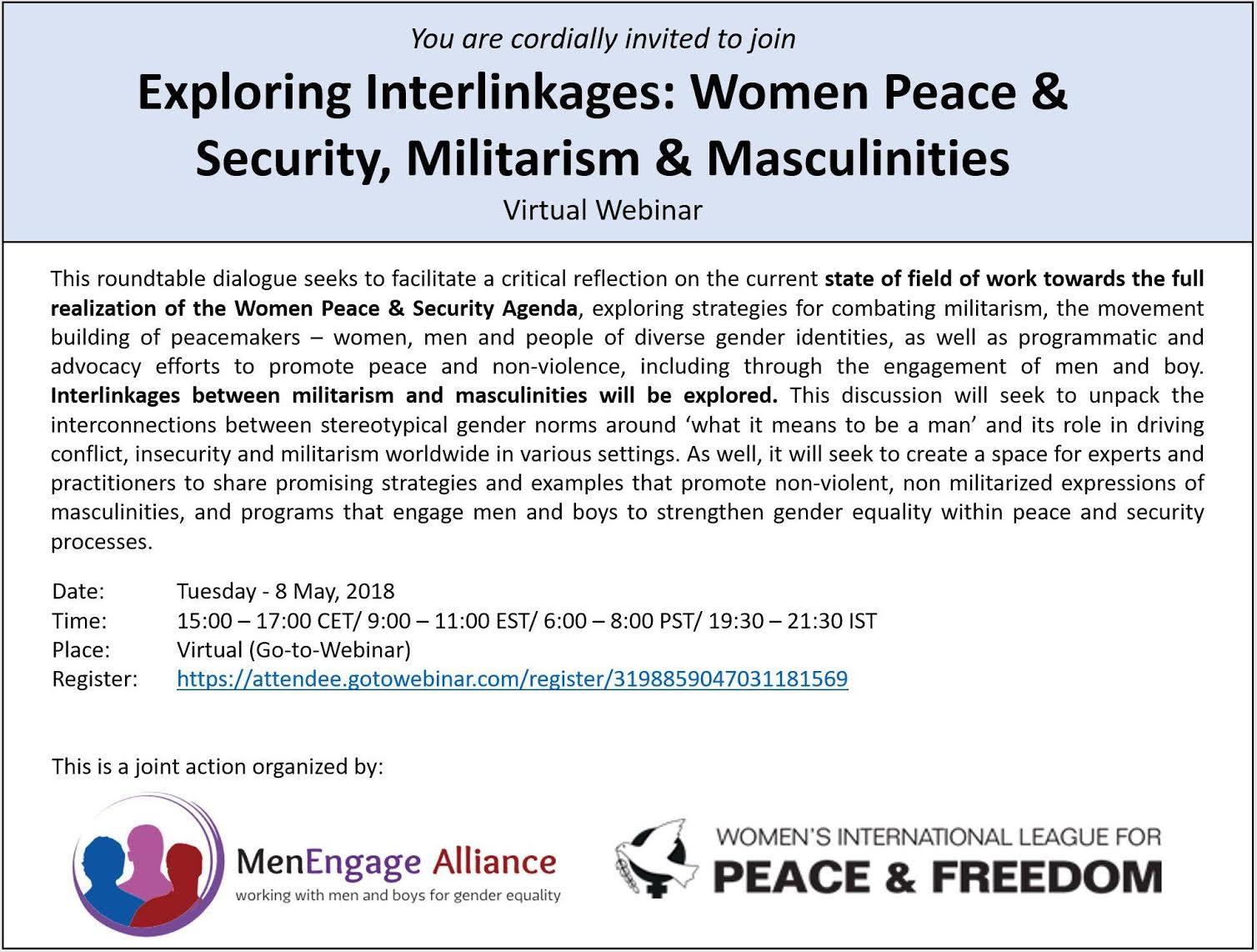 On May 8, 2018, the Women’s International League for Peace  and Freedom (WILPF) and the MenEngage Alliance co-hosted a webinar titled “Exploring Interlinkages: Women, Peace and Security, Militarism and Masculinities”. The event created a space to share feminist analysis on the links between militarism, masculinities and peace and security, as well as to explore opportunities for strengthening activists action to build equal partnerships among women and men for gender equality, demilitarised security and justice.

Recognising the increasing focus on engaging men on Women, Peace and Security, the participants started the discussion by examining why at this moment feminists should be thinking about the role of men and masculinities in their work for feminist peace. Why focus on men and masculinities when it is women who are consistently sidelined and ignored? Panelists agreed that engaging men and boys as gender champions is not the solution to realising the Women, Peace and Security Agenda. However, utilising a gender conflict analysis that addresses masculinities and femininities, and engaging men and boys in creating equal partnerships with women and girls is critical to transforming gender relations and patriarchy. Feminist researchers have long drawn attention to how ideas of masculinity and femininity have been used to “sell” militarism and war. Addressing the interlinkages between the Women, Peace and Security Agenda and masculinities in a way that expands space for gender analysis and prevents further minimisation of women’s experiences and voices is critical.

Activists from the Democratic Republic of the Congo (DRC) and India then shared about how they are working with men and masculinities to reflect on their own positions and constructively support women's leadership for feminist peace, and what gaps exist that need to be addressed to strengthen action. They highlighted the importance of starting with individual change, but then strengthening partnerships for political action to address enabling environments for equal partnerships, nonviolence and peace at personal, political and international levels.

The Women Peacemakers Programme training on gender-sensitive active nonviolence provides one good example of fostering individual change. It utilised feminist consciousness raising techniques among men to enable personal self reflection on themselves as individual gendered beings, identify problems with existing violent masculinities, and build nonviolent alternatives that support women. Participants argued that building new communities through this kind of initiative, and maintaining ongoing engagement, are critical first steps in mobilising across women and men for peace.

Participants also identified the importance of going beyond individual men to build men’s support for women’s leadership on challenging political forms of masculinity, including militarised masculinity and political economies of war. In South Asia, United States, Israel and elsewhere, there is a history of celebration of militarism as part of nationalism. Ideas of being a “real man” are bound up with being a “protector” who uses armed violence if necessary to defend against evil. Just as individual men need to choose masculinities defined by care over violence, if we are to build a world of partnerships and peace, so, too, Member States, international financial institutions and multilateral organisations need to build political economies of care and justice rather than exploitation and war. This means we need to #MoveTheMoney from war to peace, address colonial and racist histories of violence within and between countries, and invest in gender reparations and social safety nets that ensure livelihoods for peace.

One promising step being taken in this area includes the work of the Congo Men’s Network with ex-combattants on masculinities and active nonviolence. Another is the capacity building work of Indian organisation SAMYAK, which seeks to build men’s critical understanding of these key concepts and link issues of gender, masculinities, health and development with larger structural issues like patriarchy, caste-class-religion-based discrimination and violence, globalisation and economic changes, nationalism, militarisation and peacebuilding. A third is work by peace activists in Turkey, where men supported women’s leadership for peace, rather than imposing men’s leadership, to prevent patriarchal movements and create a better way. Finally, a more structural example is the women-led successful activism for an Arms Trade Treaty (ATT) and Nuclear Ban Treaty, supported by men activist partners, which affirmed the gendered and humanitarian impact of these arms, and created a new normative commitment on disarmament for peace.

Overall, panelists agreed that socially-constructed gender norms that define masculinity as different from and superior to femininity, and associate masculinity with power, violence and control, play an important role in driving conflict and insecurity worldwide. However, simply “engaging men” is not enough to prevent conflict. Feminist peace -- or peace based on women’s equal participation, protection and rights -- requires women and men and people across the gender spectrum working together to dismantle patriarchy and build a better world. Doing so requires building trust, understanding power, and working together in partnership and across movements. As Cynthia Enloe has often affirmed, “the personal is international”. This means that change requires transforming gendered relationships of power at the personal, political and international levels from inequality and violence to participation and justice.