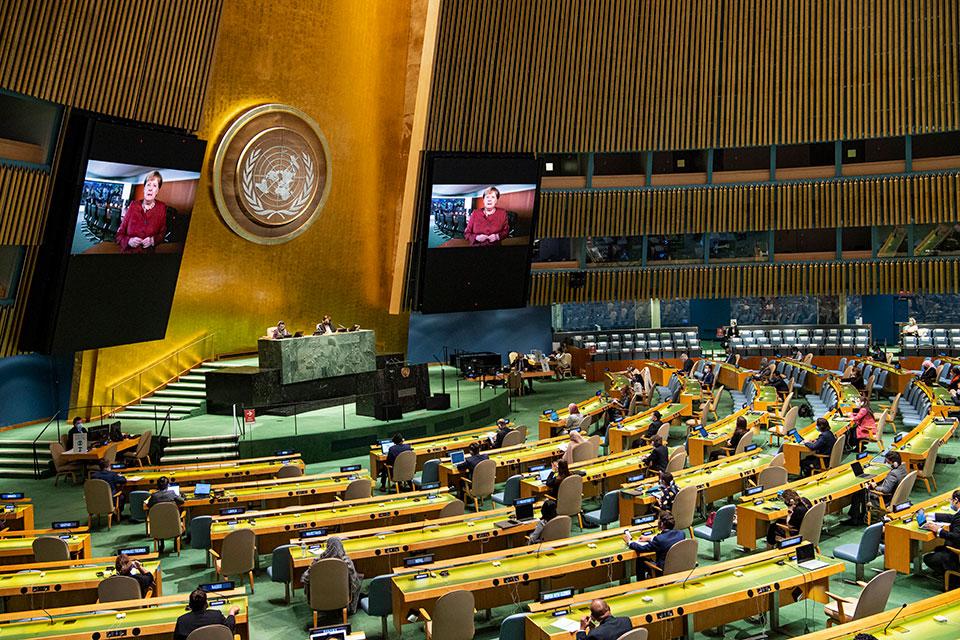 On 1 October 2020, the General Assembly convened a high-level meeting on the 25th  anniversary of the Fourth World Conference on Women, held in Beijing, China in 1995. With the theme of “Accelerating the realization of gender equality and the empowerment of all women and girls,” this meeting set out to demonstrate commitments and concrete actions and garner the political will to advance the achievement of gender equality by 2030. Many world leaders highlighted the progress made in the past twenty-five years to further gender equality and empower women in terms of maternal mortality, increased women’s representation and girls education. They also acknowledged that because the current COVID-19 pandemic is exacerbating pre-existing inequalities and in particular resulting in a global rise in violence against women, much work needs to be done to stop this reversal of gains. However, commitments on implementation of normative frameworks, particularly on gender, conflict and disarmament remained lacking in this high-level meeting.

Despite the fact that militarism and conflict are rooted in and contribute to gender inequality, there was relatively little focus in the meeting on key issues such as conflict prevention and disarmament as a means of upholding women's human rights. Additionally, issues of disarmament, the gendered impact of conflict and the inequalities faced by marginalized women and girls were not touched upon in this meeting.

The Beijing Declaration and Platform for Action (BPfA), unanimously adopted at the Fourth World Conference on Women in 1995, was crucial to build a world where every woman and girl could realize her full rights and freedom. In particular, the Platform for Action made commitments under the 12 critical areas of concern, which includes poverty, education, health, armed conflict, human rights, and the environment. But twenty-five years later, countries have barely scratched the surface when it comes to delivering commitments on gender equality set in the BPfA.

A recent UN Women report highlights that progress on gender equality is losing its momentum, particularly as hard-won achievements are either being reversed or stalled.  Conflicts in the past 25 years have become increasingly complex, in particular their exacerbated gendered impact. In the meantime, military expenditure has nearly doubled, amounting to US$ 1.82 trillion in 2018. While almost all peacemakers are men, at least 17 landmark normative frameworks have emphasized that women are key to peacebuilding and conflict prevention. One in three women worldwide has experienced at least one instance of physical or sexual abuse in her lifetime. At least one in five refugee or displaced women have experienced sexual violence. In crisis and emergency settings, including situations of armed conflict and the current COVID-19 pandemic, rates of gender-based violence, including domestic violence, have increased.

Gender inequalities and violence against women continue to exist because of patriarchal norms bolstered by structural violence that inhibits the protection and fulfillment of women’s economic, social, civil and political rights. Militarisation -- particularly the proliferation of weapons -- fuels sexual violence and conflict. Women are uniquely affected by the accumulation and use of weapons, the arms trade, and armed conflict: weapons facilitate human trafficking, forced prostitution, and sexual violence; and they are often used to kill, threaten, or intimidate women in their homes and communities.  The gendered dimensions of power and inequalities, and the use of violence to maintain these, must be regularly brought to surface and tackled to build feminist, resilient, and sustainable communities. Shifting away from militarized approaches to security is an urgent challenge that requires addressing and dismantling institutions with entrenched power and prestige, including the military and weapons manufacturers.

Gains made on gender equality under threat of reversal

The day-long meeting witnessed over 100 world leaders reviewing progress - or the lack thereof - in the 12 critical areas mentioned in the BPfA through pre-recorded videos. Almost all states referred to the disproportionate impact of the COVID-19 pandemic on women and girls and the ways in which it threatens to roll back on the progress made on gender equality. In light of that, many highlighted efforts to combat poverty and violence against women. In particular, Nigeria addressed gender-based poverty and drew attention to a national empowerment programme that provides zero-interest and collateral-free credits to traders and farmers, many of whom are women. Venezuela outlined the various national measures to tackle the feminization of poverty, which included building 20 million houses and guaranteeing women the right to universal education. Ukraine expressed their continued efforts to improve legislation in the sphere of poverty reduction. Senegal, Suriname, Iceland and Ecuador (amongst other states) mentioned the need to analyse the causes of poverty and prioritize poverty reduction.

The global increase in gender-based violence during  2020 was widely acknowledged by leaders at the meeting. Many states reaffirmed their focus to eradicate all forms of violence against women through legislation and policy measures (notably Rwanda, Andorra, Paraguay, Phillipines, Moldova, Panama, Croatia, Antigua and Barbuda, Mauritania, UAE, Iraq, Myanmar, South Korea, Sudan and Tunisia). Several states discussed particular measures they have adopted to address the rise in GBV. Madagascar announced the establishment of a hotline for victims of gender-based violence. Austria established violence prevention centres and counselling centres for victims of sexual abuse in every province. Cyprus mentioned their ratification of the Istanbul Convention, the draft laws criminalizing violence against women and employment and vocational training measures. Mauritius announced the establishment of a High Level Committee on the Elimination of Gender-Based Violence. However, attempts to address the root causes of gender based violence through comprehensive policies and programmes with a survivor centered approach were not adequately outlined. Although a few states focussed on gender budgeting and implementation of universal obligations related to preventing GBV, most did not mention efforts to incorporate gender impact analyses in their annual review methods. Moreover, the role of militarization, including the proliferation and possession of weapons, in fueling sexual and gender-based violence and conflict was completely unaddressed in this meeting. Hilary Gbedemah, Chair of the Committee on the Elimination of Discrimination against Women, noted that women human rights defenders around the world are facing violence and funding and registration obstacles continue for women’s organizations.Ixchel Adolfo, a young leader from Guatemala, called on world leaders to create safe spaces for girls “from childhood to adulthood” so they don’t have to endure violence and can receive holistic education and become world leaders. “The people who know about our needs are us,” she said, urging states to open conversations with youth, particularly young women.

The Women, Peace and Security agenda is strongly rooted in the notion that women’s agency, voice and capabilities along with a critical gender perspective is paramount to devise better policies and achieve feminist peace. Increasing women’s participation in conflict prevention and peace processes - a central pillar of the WPS agenda - is crucial to escape cycles of conflict, to create inclusive and more democratic peacemaking and to turn from gender inequality to gender justice. Twenty years and ten resolutions later, it is pertinent to take a rights-based approach wherein women’s economic, political and social rights are upheld and tackle the root causes of conflict such as patriarchy, militarized masculinities and armaments that fuel violence against women and exacerbate gender inequalities. To realize and reclaim the WPS agenda’s transformative potential, it is crucial that states move away from verbal commitments to proactive action- a demonstration of which remained lacking in this meeting.

Many states highlighted the need to increase women’s participation in all spheres but failed to substantiate how they would tackle this issue with commitments and action plans. Moreover, only a handful of states mentioned their concrete attempts to implement the WPS agenda. Egypt emphasized the importance of women’s role in peacebuilding negotiations and highlighted their participation in the development of the Arab regional strategy for implementing UNSCR 1325. Ireland noted that a peace process that includes women is more durable, and reaffirmed their commitment to advancing women’s inclusion in all aspects of peace and security as they join the UN Security Council (UNSC) in 2021. Switzerland also mentioned their plans to step up commitments to the WPS agenda and the implementation of UNSCR 1325. Few states highlighted their National Action Plan to implement the WPS agenda and UNSCR 1325 (Nigeria, Ukraine, Egypt, Ireland, Luxembourg, Bhutan, Bulgaria, Sudan, Tunisia, Gambia).  Morocco and Croatia discussed the WPS agenda in relation to violent extremism.

However, discussions on disarmament, budget for WPS implementation, gendered impacts of conflict, and humanitarian assistance were missing in the meeting. A civil society representative at the meeting, Sascha Gabizon, Director of Women Engage for a Common Future, stressed that intersectional feminists are insisting on structural reforms, adding that it is essential to move the money from the military and instead increase investments in health care, social protection and women’s rights. On that note, she called on states to divest from the plastics, pesticides, mineral and nuclear industries.

The Beijing +25 anniversary and this high-level meeting also took place in the context of the Generation Equality Forum which is set to launch concrete and transformative action to build momentum and achieve progress on gender equality through the six Action Coalitions. In this regard, some states mentioned their involvement and support for the Generation Equality Forum set to take place in 2021.

This year of anniversaries, including the 25th anniversary of the BPfA, 75th anniversary of the United Nations and 20th anniversary of the UN Security Council resolution 1325, falls at a point in time where pre-existing inequalities are being exacerbated and collective efforts towards gender equality are threatened to be reversed, making the creation of equal and inclusive societies to realize feminist peace more urgent than ever. While a lot has been achieved in terms of developing normative frameworks on gender equality, including the ten resolutions that make up the women, peace and security agenda, there is still a long way ahead. This year is an opportunity to prioritize strengthening current frameworks through implementation and a strong system of accountability to achieve women’s rights and  to shape a feminist future that upholds all of us. It is also a rallying point to effectively address the root causes of violence against women to dismantle current oppressive structures, strengthen institutions, scrutinize the ways in which women’s human rights are being denied and watered down around the world, to achieve true peace.

The high-level meeting on Beijing +25 witnessed most states reviewing and taking stock of the progress and setbacks since the historic conference to advance gender equality, rather than demonstrating concrete actions on implementation and accountability on past commitments and new ones. While it was heavily focussed on the gendered impacts of the COVID-19 pandemic and eradicating violence against women, some states, particularly leaders from the Small Island Developing States (SIDS) highlighted the disproportionate impact of climate change on women and urged to integrate climate justice with a gender-sensitive approach to development. A few states also focussed on the role of youth in achieving gender equality, with Denmark and Norway passing the floor to youth delegates during their statements. However, there were major gaps in terms of addressing disarmament, the gendered impact of war and conflict and the inequalities faced by people of diverse sexual orientations, gender identities and expression, and sex characteristics (SOGIESC). While states’ efforts to tackle gender-based violence through legislations and policy actions are appreciated, in order to truly achieve the world for women and girls as visualized in the Beijing conference in 1995, there is still more to be done - we need bold, proactive and holistic action and we need it to begin now.