By Nela Abey and Yvette Dzakpasu 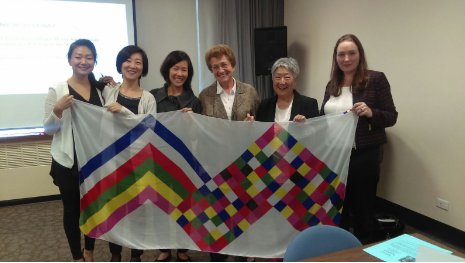 Panellists and organisers at the press conference (Photo: Yvette Dzakpasu)

On September 27, 2016, the Women’s International League for Peace and Freedom (WILPF) and Women Cross DMZ held a press conference. It featured members of Women Cross DMZ’s advisory board and delegates who participated in the peace walk across the Korean Demilitarized Zone, Cora Weiss, President of the Hague Appeal for Peace, Kozue Akibayashi, International President of WILPF and Suzy Kim, Professor of Korean History, Rutgers University.

Women Cross DMZ is a NGO led by women working for peace in Korea. In May 2015, on the 70th anniversary of the division of Korea, Women Cross DMZ led a historic women’s peace walk across the Demilitarised Zone from North to South Korea.

The press conference covered a letter signed by over 100 women leaders from 35 countries urging Secretary-General Ban Ki-moon to initiate a peace process in Korea. The letter calls for the replacement of this armistice with a binding peace treaty to end the Korean War. The letter further calls for women to be significantly represented in the peace process as per United Nations Security Council Resolution 1325 and for the peace accord to be delivered by 2018.
The panellists highlighted the importance for such an agreement, particularly given today’s nuclear climate, including North Korea’s fifth nuclear test last month and spoke about the role that civil society can play in achieving such an agreement.

During the press conference Suzy Kim of Rutgers University detailed the historical background to the Korean War and the 63-year-old Armistice Agreement. She observed that a divided Korea is the last vestige of the Cold War and grew out of arbitrary division which led to civil war and became an international war. The Armistice Agreement was signed in 1953 after three years of fighting and called for political settlement but this armistice was repeatedly violated by both sides.

Kozue Akibayashi of WILPF noted that the situation in the Korean peninsula had been somewhat neglected by the world at large. Very few people have paid attention to the separation of families across North and South Korea. Women Cross DMZ has highlighted the plight of these families by taking part in the peace walk of the demilitarised zone.

Cora Weiss of Hague Appeal for Peace reiterated the call for action from these two women’s organisations stating that “we are here to call on Secretary General Ban Ki-moon to use his authority and opportunity in the next 100 days to prevent a war and to propose a peace process”.  She highlighted the importance of civil society in achieving such actions noting that “change does not happen without civil society”.

The audience was given an opportunity to contribute to the discussion in the ensuing question and answer session, which highlighted the important role that civil society can play in securing peace in the Korean peninsula. However, the overwhelming sentiment at the close of the press conference was that while civil society has been very active in this area, those in positions of political power must use their influence to secure peace in the Korean peninsula, summed up in the words of Maria Butler, “women’s civil society is raising voices for peace but demand that political leaders do their job”.