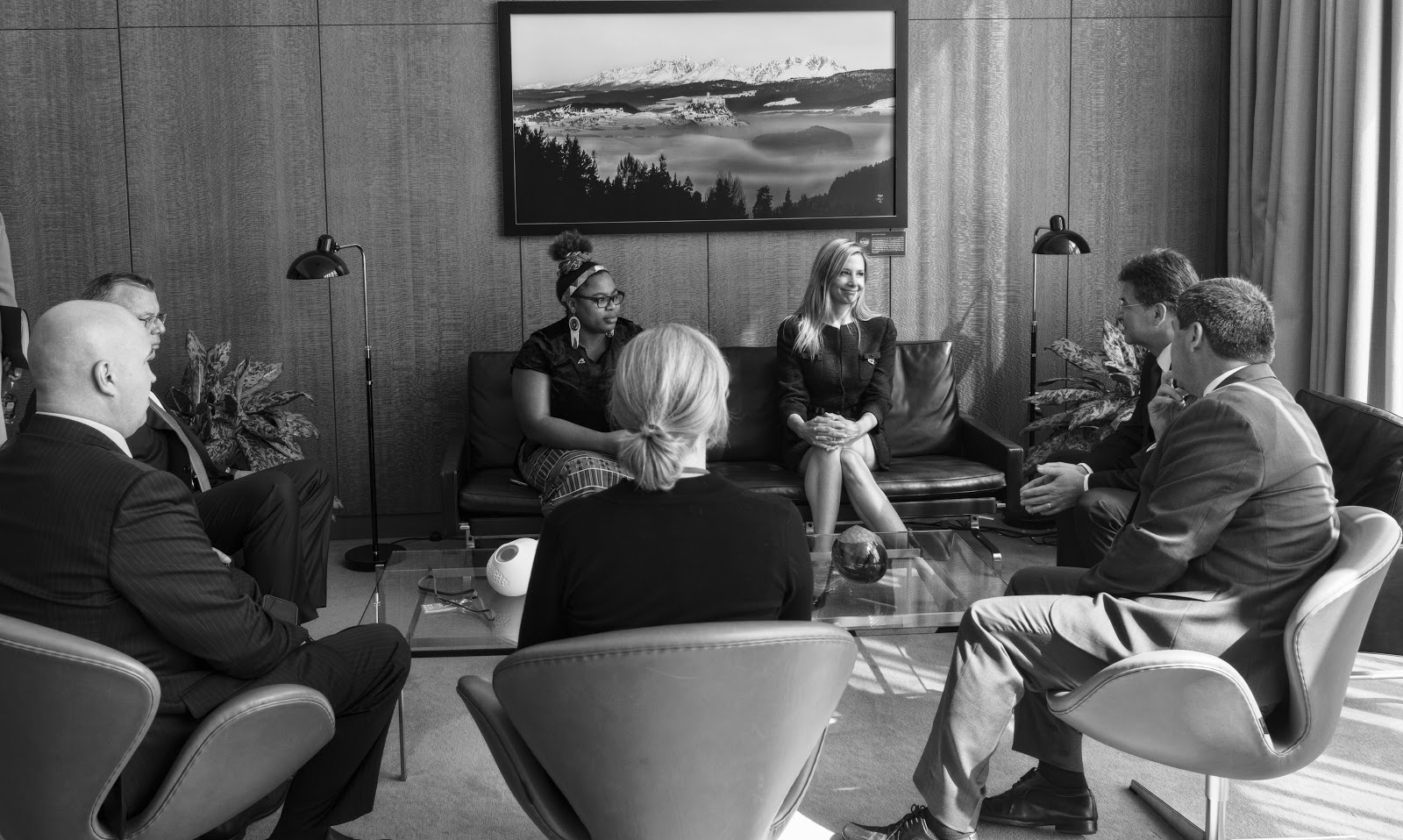 On 27-28 September, Miroslav Lajčák, the President of the seventy-second session of the General Assembly, hosted a High-Level Meeting of the plenary of the General Assembly to appraise progress in implementing the Global Plan of Action to Combat Trafficking in Persons (2010) and assess achievements, gaps and challenges in the implementation of relevant legal instruments. At the outset of its two‑day high‑level meeting, the Assembly adopted the “Political Declaration on the Implementation of the United Nations Global Plan of Action to Combat Trafficking in Persons” by consensus, pledging to end “modern-day slavery”. Throughout the meeting, speakers called for a people-centered and holistic approach to the Global Plan, with a focus on “the 4 P’s”: (i) Prevention, (ii) Protection of victims, (iii) Prosecution of recruiters and traffickers,  and (iv) multi-level Partnerships. In this framework, speakers put the spotlight on the most vulnerable to trafficking, namely women and children. Limited mentions were however made to the importance of the role of survivors in developing effective preventive and response practices.

According to the UN Office on Drugs and Crime Global Report on Trafficking in Persons (UNODC), tens of millions of people are victims of forced labour, sexual servitude, recruitment as child soldiers and other forms of exploitation and abuse.  In fact, Mira Sorvino, UNODC Goodwill Ambassador for Global Fight Against Human Trafficking, reported that 71% of all trafficked individuals were identified as women or girls in 2016.

Over the course of the  meeting, the speakers joined their voices to ensure that the UN Plan of Action represents the appropriate joint-framework for action as it is victim-focused and gender-specific. In this context, speakers recommended strengthening the Global Plan Framework in line with the Agenda 2030, following the “4 P’s” Call for Action:

Member States underscored that prevention efforts must be strengthened to properly address human trafficking, recognising that peace and security challenges amplify the threat of human trafficking. Most prominently, speakers called on the international community to address the root-causes and push-and-pull factors of human trafficking – poverty, unemployment, migration and labour laws – to provide an economic alternative to traffickers and recruiters. Thus, speakers recognised that efforts must focus on starving human traffickers of benefits while addressing demand and supply‑side problems. On the global level, the Agenda 2030, whose 17 Goals aim at reducing intra-state and inter-state inequalities, was identified as a key tool to spur economic and social development, and essentially fill in the demand-side for trafficking. On the national level, several member states urged strengthening national frameworks designed to prevent and suppress trafficking. Speakers highlighted that special attention should be given to prevention through awareness‑raising initiatives at all levels, especially through media and education campaigns. The representative of Guinea reported such campaigns proved successful in his country, as highly-mediatised civilian awareness campaigns against trafficking have been associated with a rise in the reporting of trafficking activity to the police. Alternative national prevention mechanisms included human trafficking hotlines, reinforced data collection systems, national interagency coordination groups, or diverse legislative and institutional efforts to combat trafficking.

Sentencing rates for human trafficking offences are low, with only 9071 reported sentences worldwide in 2016. At the international level,  the debate reiterated the need for international legal systems and strengthened enforcement to end impunity. UN Security Council Resolution 2331 recognises the importance to criminalise  those who are engaged in trafficking, including in conflict settings. Multiple other UN instruments uphold and support the rights of every human being to be free of commercial exploitation and their right to justice; yet very few statements mentioned these instruments, or other legal solutions to address human trafficking and bring justice to victims. At the national level, states called for a reform of national legal systems where needed  to prevent citizens from becoming victims of human trafficking and hold the traffickers, pimps, and buyers accountable. The Representative of the Dominican Republic mentioned a new national initiative to facilitate prosecution through the setting up of a specialist prosecutor's office against trafficking and a specialised legal area of staff working with trafficking victims in cooperation with national legal agencies. Multiple other speakers mentioned transnational referral mechanisms as efficient ways to prosecute traffickers and recruiters.

Lastly, speakers highlighted the importance of deepening multi-level partnerships in the fight against human trafficking. First, partnerships with the private sector were characterized as  essential. Indeed, the International Labour Organisation reported that human trafficking was a 150 billion dollar illegal economy in 2016. Businesses and companies have the responsibility to insure their global chain of production is free from human trafficking and forced-labour. In this vein, the Representative of Canada reported on the efficiency of Canada’s Joint-Protect Initiative which insures private Canadian businesses do not use trafficked individuals to make their products. Andrew Gilmour, the Head of OHCHR  highlighted the importance to team up with airlines to spot human traffickers. Secondly, speakers underlined the key role that international and interagency cooperation can play in identifying traffickers and victims of trafficking. Cooperation with ICAT and INTERPOL in particular was mentioned multiple times. Regional cooperation holds a particular importance as well, reported the Representatives of Australia and Indonesia, who applauded the work of the  Bali Process on People Smuggling, Trafficking in Persons and Related Transnational Crime (Bali Process) in facilitating policy dialogue, information sharing and practical cooperation at the regional level. Lastly, speakers mentioned the critical role civil society organisations can play in preventing and suppressing human trafficking. The Representative of Guinea in particular recognised the crucial role of civil society partners in the areas of victim care and assistance, especially in regards to insuring identified victims are not re-victimised for having been trafficked. Joining their voices to Guinea’s, a few speakers called on UN entities to reach out to local organisations more, highlighting their important role in the early identifications of victims.

While the Global Plan promotes a gender-sensitive approach to the trafficking in persons, and while CEDAW, the Beijing Declaration and Platform for Action , the Palermo Protocol to Prevent, Suppress and Punish Trafficking in Persons, Especially Women and Children along with numerous resolutions (UNSCR 2242 and UNSCR 2331) all recognise the gendered nature of human trafficking, the effective integration of  anti-trafficking action plans with Women, Peace and Security action plans has not been completed. At this time, while a legal and policy framework is in place, there is no concerted international action to adequately address women’s vulnerable status to trafficking beyond promises for action. As the debate illustrated, women are still envisioned as simply the “worst off” victims of human trafficking, or “most likely” to being taken advantage of. Apart from a couple of civil society organisation representatives, most speakers at the debate failed to recognise the specific challenges and cumulative disadvantages women face in patriarchal human trafficking settings.

1. Trafficking of Women as a Fatality in a Patriarchal mindset

The speakers at the debate mostly referred to women as “especially vulnerable” to human trafficking. While these statements recognise that human trafficking is a gendered issue, they envision women’s trafficking as inevitable and fail to recognise why women are more likely to be trafficked. This is especially the case for the sexual exploitation of women. The demand for women for commercial sex fuels sex trafficking. This demand is based on the mentality that sex is a male right in a commodity culture. The corresponding female supply for this market is based on women’s inequality and built on the cultural sexual objectification and commodification of women. At the debate, women’s vulnerabilities were presented as a fatality and no references were made to the underlying causes of such vulnerabilities. The representative of Mexico was the only speaker to highlight that  consumerist societies, which facilitate exploitation, are paradoxical to models based on human rights, specifically the Global Plan. This entails a key failure for the remaining member states and other key stakeholder at the debate to recognise the true root causes of the trafficking of women beyond poverty and unemployment. Moreover, over the two-day meeting, there was no mention of the need to support women-led initiatives to stop trafficking, reducing women to victims rather than as agents of change. This represents a second missed opportunity for member states to instill a feminist change as per Resolution 2331, which encourages member states to collaborate with local women’s organisations, notably in prevention and accountability measures.

2.  Protection and Rehabilitation of Women Victims of Human Trafficking

At the debate, an emphasis was put on the need to strengthen efforts to protect and care for women victims of human trafficking. Trafficking is a gender-specific phenomenon; women and men are often trafficked for different purposes. For this reason, assistance and support measures should be gender-specific, taking into account the different needs of male and female victims. The Secretary-General Representative on Sexual Violence in Conflict underscored the need for rehabilitation programmes for women survivors of trafficking. The Representative of Libya called for providing new resources to build shelters, with a special focus on women and girls. Very importantly, the Director of Policy at UN Women highlighted that preventative and protective measures for women in human trafficking must focus on economic empowerment programmes to rehabilitate women and ultimately prevent a relapse of human trafficking in communities. The Director of Policy at UN Women added rehabilitation efforts must focus on ending stigmatisation of women victims of human trafficking to prevent their re-victimisation. These statements were crucial to the discussion as they added a true gender-perspective and gender-analysis to human trafficking. However, the discussion still lacked a legal aspect to women’s rehabilitation, and most notably a focus on justice.

The debate comprised a number of missed opportunities.