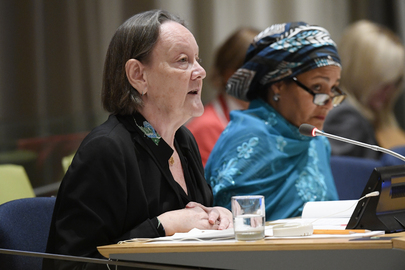 Jane Connors, United Nations advocate for the rights of victims, delivers her remarks at the high-level meeting on the prevention of sexual exploitation and abuse.Next to her is Deputy Secretary-General Amina Mohammed. 18 September 2017. United Nations, New York (Photo: UN Photo/Evan Schneider).

On 18 September 2017 the UN Secretary-General, António Guterres, convened a  High-Level Meeting on the Prevention of Sexual Exploitation and Abuse (SEA) at the UN Headquarters in New York. The main goal of the meeting was to reaffirm the UN zero-tolerance policy and highlight the progress achieved by the United Nations in combating and preventing SEA committed by its personnel. Discussing the strategies for improvement and strengthening non-violence in peacekeeping, the speakers reaffirmed the need for the UN and Member States to elevate the voice of victims and put their rights and dignity at the forefront of all efforts to prevent and address SEA, as well as strengthen partnerships with civil society and local communities. In fact, feminist and sustainable peace will remain only a vision as long as the UN, a guarantor of peace and stability in the world is not able to challenge patriarchal attitudes that often accompany  SEA and its root causes.

The meeting was an opportunity for the Secretary-General to introduce  Jane Connors in her new role as a  Victims’ Rights Advocate. Her role is to strengthen the support that the UN provides to victims of SEA through adequate protection, appropriate assistance and reliable recourse to justice. The Victims’ Rights Advocate will work across the United Nations system, including with the agencies, funds, and programmes and collaborate closely with Resident Coordinators to ensure a strong unified approach to victim assistance. According to Connors, her priorities are to partner with all stakeholders to identify consistent, transparent, gender, child and disability sensitive strategies that put victim’s concerns at its center.

To highlight the UN commitment to eradicating SEA, the Secretary-General announced three initiatives to address this issue. First, the establishment of an Advisory Board of external experts and representatives from civil society. The second initiative is a Voluntary Compact, which emphasises the shared principles in which the United Nations and the Member States support peace operations on the ground and includes specific commitments for the protection from SEA. Lastly, the Circle of Leadership on the prevention of and response to sexual exploitation and abuse in United Nations operations, which is comprised of the heads of states committed to end impunity and strengthen measures to prevent SEA.

The speakers acknowledged that prevention, as a general concept, is the most useful tool for combating SEA and achieving a world free from violence. Preventing these crimes from happening in the first place and addressing the root causes of conflict, which necessitated the deployment of peacekeeping forces in the first place, are essential for eliminating SEA. Applying the prevention concept to addressing SEA, the Secretary-General highlighted that effective SEA prevention should be based on strengthening discipline of  UN personnel through pre-deployment training and oversight. Additionally, President of the 72nd Session of the UN General Assembly suggested that prevention of SEA should be based on improving the UN’s capacity to prevent – and not just respond – to conflicts.

Reflecting on the 2015 Global Study findings, the speakers shed light on the importance of women’s meaningful participation as humanitarian workers, civilians and uniformed personnel in peace operations for effective prevention and response of  SEA. In fact, the current data suggest that greater participation of women leads to higher reporting of abuses and lower incidents overall. Referencing the provisions of Security Council Resolution 1888 (2009), President of the 72nd General Assembly referred to the implementation of the Women, Peace and Security Agenda as a way to promote women’s participation in the efforts to address the root causes of SEA. Overall, there was an agreement among the speakers about the need for meaningful inclusion of more women in mediation and peacebuilding processes and ensuring gender mainstreaming in the everyday work of UN peace operations, in line with the recently-launched gender parity strategy.

Civil society was presented as another crucial partner for prevention and mitigation of SEA. Since advocating for those who are most at risk requires cooperation across the UN system and engagement with regional, sub-regional bodies and other expert and political frameworks. The knowledge and experience possessed by the representatives of civil society on the ground is crucial for obtaining a complete analysis of both the root causes of SEA and more general peace and security concerns. As Jane Connors stated, civil society organisations have assisted victims “through gender and child-sensitive complaint mechanisms, protecting their interests during investigations, seeking accountability and ensuring that they are informed and able to participate and make their voices heard in the processes that concern them”.

Even though the meeting touched on the importance of prevention, the logic of addressing patriarchal attitudes and militarisation as root causes of violence that influence SEA has been missing from the conversation. For eradicating the problems like SEA, the change of attitudes is important. The UN and the Member States have to prioritise a Feminist and Sustainable Peace approach based on non-violence, de-militarisation and women’s meaningful participation. To do so, they should: