The United Nations General Assembly Informal Interactive Dialogue on the Report of the Secretary-General on the Responsibility to Protect: The responsibility to protect and accountability for prevention 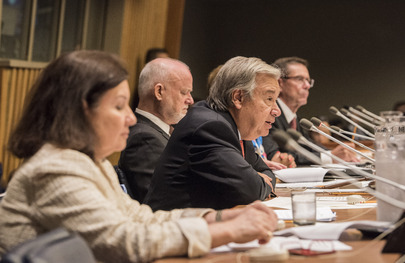 On 6 September 2017 the General Assembly Informal Interactive Dialogue on the Report of the Secretary-General on the Responsibility to Protect (R2P) convened at the UN Headquarters in New York. The main goal of this dialogue was to examine the recent the Secretary General’s report entitled “The responsibility to protect and accountability for prevention”, which identifies the existing gaps between the R2P prevention commitments and the daily reality confronted by populations at risk of mass atrocities.

Member States and civil society representatives discussed the ways in which strengthening the capacity of the international community to prevent and address atrocity crimes and other violations of the R2P is possible. Unfortunately, the dialogue lacked any substantial references to women’s rights, with only some participants highlighting the importance of women’s participation for the prevention of conflict and mass atrocities. In general, all references to women were concentrated within the protection framework rather than focused on the need for women’s  meaningful participation in prevention efforts.

Peter Thomson, President of the General Assembly (UNGA71), opened the meeting by stating that preventative action requires us to invest in sustainable peace and development, and strengthening prevention is the best way to prevent the loss of lives and avoid having to protect civilians.

In their statements, the speakers emphasised that the R2P and prevention of mass atrocities are the first and foremost the responsibility of national governments. Representative of Ghana, among others, warned that all Member States must ratify and establish their commitments to human rights treaties and protocols, including the Genocide Prevention Protocol. However, the international community, including the UN bodies, also have a responsibility to support national action. The speakers gave outstanding attention to the need to build stronger partnerships between Member States and the bodies within the UN system in this context

The speakers also highlighted the need to strengthen early-warning mechanisms for atrocities’ prevention. To identify early-warning signs, the speakers suggested Member States appoint a representative responsible for the implementation of the R2P. In this vein, national human rights institutions and civil society groups can play an important role in assessing early signs of instability, including atrocity prevention analysis and field research. For instance, the representative of the International Coalition for the Responsibility to Protect (ICRTOP) stated that there is a need to “invest in building relationship with civil society actors because it is important for identifying warning signs at an early stage.”

The speakers also stressed the importance of structural prevention and preventive diplomacy in designing a comprehensive approach to the implementation of the R2P. In line with the principles outlined in the Sustainable Development Goals (SDGs) and specifically in SDG 16 on peaceful, just and inclusive societies, this approach includes strengthening institutional mechanisms, including stable and reliable executive and justice institutions. According to the speakers, strengthening governance is essential for the implementation of preventative R2P because it ensurs accountability.

Member State representatives asked for more involvement of the UN Security Council (UNSC) in order to prevent mass atrocities and suggested that the Secretary-General inform the UNSC at an early stage of any conflict to ensure effective response and prevention of these atrocities. To ensure proper response,  strengthened coordination between the different bodies within the UN system was recommended. The representative of the EU suggested that the UN needs to “work in a coherent and integrated fashion.”

Few Member State representatives, including Syria and Israel, warned about a possibility of politicising the R2P concept by several Member States for the sake of using the agenda to further their interest and justify military intervention.  The representative of Syria noted that his country has “substantive concerns on the lack of guarantees that the R2P would not be used to disrespect the sovereignty of states.”

The dialogue lacked any substantial discussion of gender in the context of the mass atrocities’ prevention.  A few Member States representatives, such as Norway and South Africa, as well as several civil society organisations, such as ICRTOP, addressed the connection between the role of women in prevention of mass atrocities. For instance, the representative of South Africa contended that It is better to have more women at the peace table to prevent conflict than more women peacekeepers. However, the majority of references to women were delivered from the perspective of “women as victims.” For example, the representative of Montenegro emphasised the need to “protect women from mass atrocities.”

The dialogue also did not adequately speak to the issue of disarmament as a tool of conflict prevention and implementing the R2P. Only the Solomon Islands and Nigeria mention disarmament and regulation of small arms as a form of conflict prevention. The representative of the Solomon Islands suggested in his statement that “proliferation of small arms contributes to conflict” and “these weapons need to be regulated to guarantee prevention.”

While discussing the means and opportunities for preventing mass atrocities, two themes are always to be taken into consideration. First, the development of early-warning mechanisms without acknowledging local women’s expertise is not sustainable. Each day, women peace activists and women human rights defenders around the world contribute – directly and indirectly – to developing and mobilising local action to ensure sustainable development based on disarmament, human rights, women’s meaningful participation and political participation. And yet their efforts are being disregarded and ignored by the international community.

Additionally, militarism does not only decrease women’s safety but also influences their political opinion and affects their meaningful participation in politics because it hinders their ability to understand and critique national security decisions and actions.

We encourage Member States to consider the following recommendations while developing strategies to prevent mass atrocities and implement the R2P: