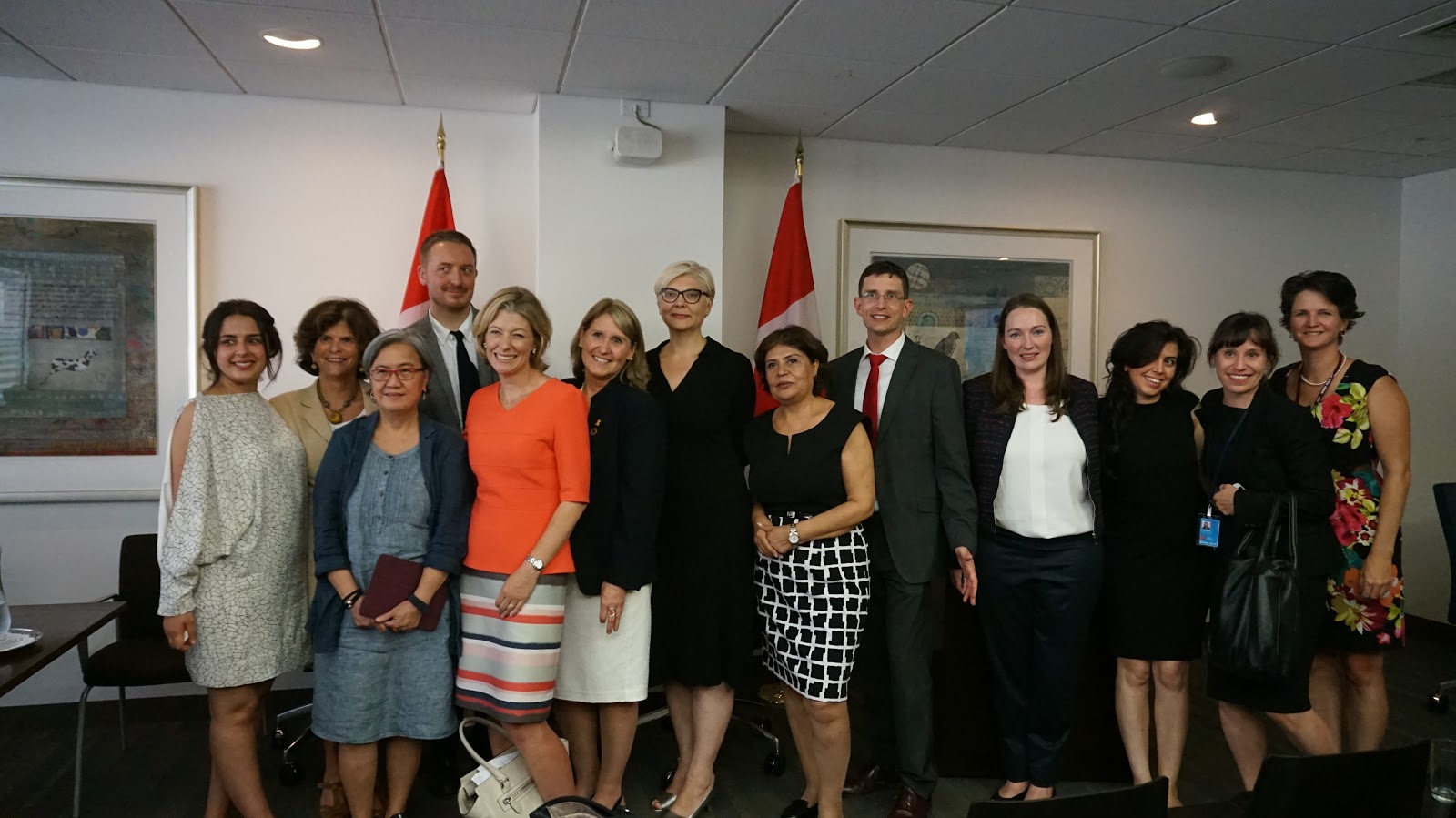 Panelists and event organisers at the WILPF-supported event hosted by the Permanent Mission of Canada to the United Nations (Photo: Sarah Tunnell/WILPF/PeaceWomen)

As part of WILPF’s ongoing effort to bring the voices of local women to the attention of the international community, WILPF co-sponsored an event with CARE International and the Women's Refugee Commission on September 20, entitled “Women and Girl’s Perspectives on the Refugee and Migrant Summit.” Hosted by the Permanent Mission of Canada to the United Nations, it featured a number of government representatives from Mexico and Canada and women peace activists from civil society organisations in Bosnia, Denmark, the United Kingdom, and Lebanon.

The discussion focused on the particular challenges faced by displaced women and girls, policy gaps in camps and resettlement states, and how the international community can best respond to improve the lives of female refugees.

Marie-Claude Bibeau, Minister of International Development and La Francophonie, Canada, introduced the panel by reaffirming Canada’s commitment to displaced women and girls. One of the major deficiencies Canada hopes to address is a systemic lack of access to necessary services such as health and reproductive care, she said. Bibeau additionally emphasised displaced women and girl’s susceptibility to trafficking and other forms of sexual and gender-based violence during migrations and in refugee camps.

Zrinka Bralo, Chief Executive of Migrants Organise, from Bosnia offered testimony of her experiences as a refugee during the Yugoslav wars, and described simple reforms that could be enacted in camps and domestic asylum processes to improve the challenges women and girls face as refugees. In the United Kingdom, for example, improvements could be made by simply printing two copies of asylum applications so that wives are not rendered entirely dependent on potentially abusive spouses. In camps, Zrinka noted there is stringent implementation of child-care protocols, while gender-care protocols as simple as placing a lock on lavatory doors go ignored.

Sabah Al Hallak, a veteran activist from the Syrian Women’s League, brought the panel’s attention to weaknesses in the current policies and practices of Lebanon and other governments in protecting and assisting Syrian women and girls, especially around legal barriers to education in Lebanon. She advocated for governments such as Lebanon to provide official documentation to refugees free of charge, and to consider variables such as language and the distance students must travel to school when providing educational services.

Mina Jaf, Founder and Director, Women’s Refugee Route, was born a refugee. Mina confirmed that the New York Declaration boasted strong Women, Peace and Security language, but reminded listeners that “we have seen this language before- we need implementation.” Unsurprisingly, language was a central issue in her presentation. She stressed that despite legal protections guaranteeing same-sex interpretation, in Greece there are few if any female interpreters available to refugees, which renders reporting sexual and gender-based violence or accessing reproductive healthcare impossible for many women and girls.

Beth Arthy, Director for Middle East and North Africa Department (MENAD), spoke about the necessity to protect younger generations of refugees, as their loss is also the loss of our future. As Arthy completed her remarks, she stated, “Let us not let the voices of girls fleeing their homes for freedom and education go unheard.”

Amb Miguel Ruiz Cabaňas, Deputy Minister for Multilateral Affairs and Human Rights Mexico, expressed his desire to discover how the international community can become true agents of change. This is particularly vital in light of the increased flow of refugees from Central America. Cabaňas highlighted a contest the Mexican Women’s Institute launched two years ago, titled “Tell Me Your Story.” The contest invited refugee women to share their experiences of migration and integration into their new communities. He remarked that though many of their stories included struggle, the purpose of the project was not to label them as victims, but to understand and celebrate how they overcame their challenges.

The testimonies offered by the event panellists provided insight into how the international community can incorporate a gender perspective into its policies and practices for women and girls. As Minister Bibeau, stated at the event, “Women and girls are strong agents of change, they are agents of peace, and a key part of any movement.”