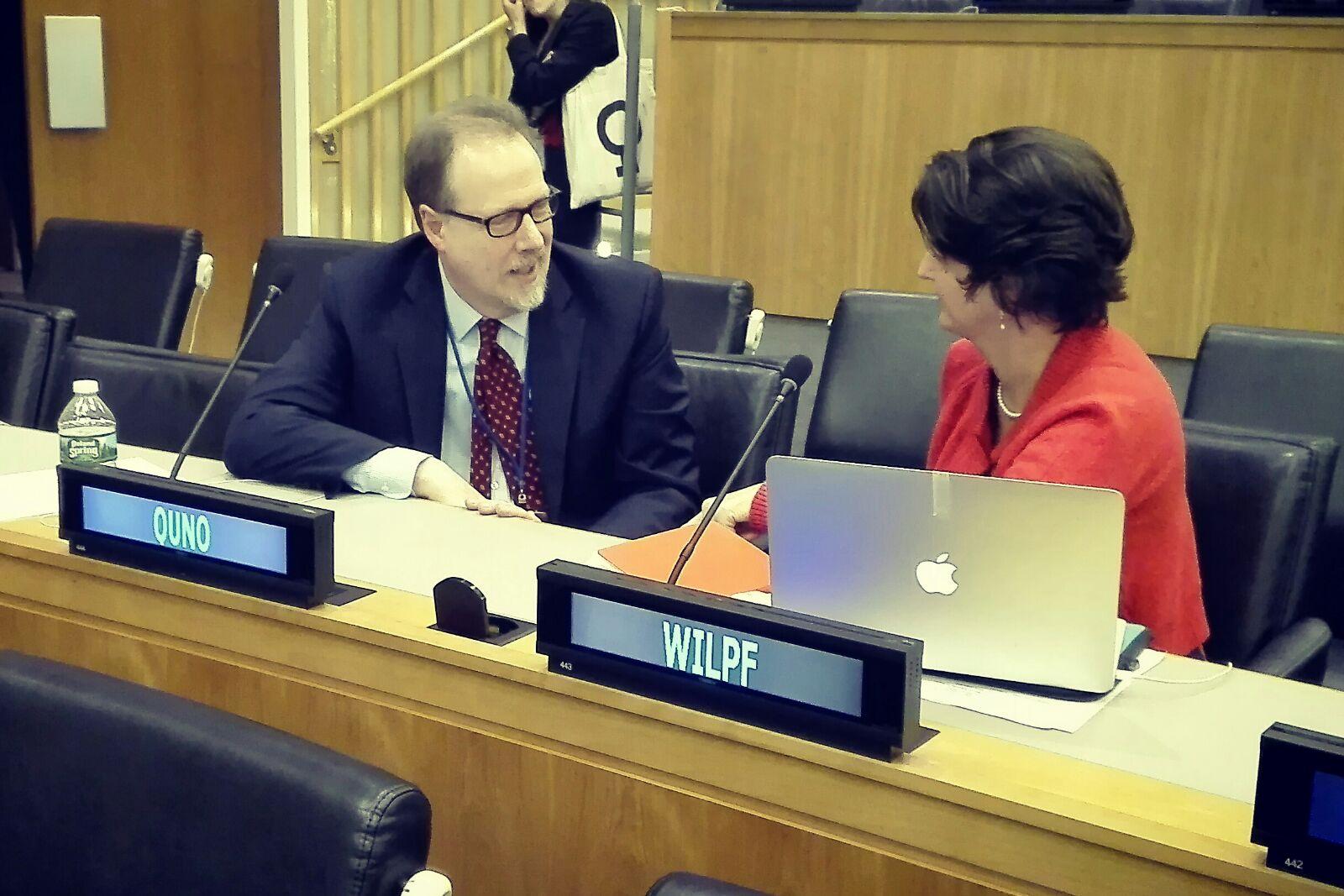 The UN Peacebuilding Commission hosted on Friday, 30 June 2017 its Annual Session with a specific focus on partnerships for financing for peace, providing an opportunity for participants to explore all options for tapping into available resources, leveraging cooperation to unlock financial flows and building strategic partnerships to ensure an integrated approach to peacebuilding on the ground.

The Session brought together the representatives of the United Nations (UN), international financial institutions (IFIs), regional organisations, civil society organisations, and the private sector for an in-depth conversation on ways of working together in support of peacebuilding and sustaining peace efforts. While the participants expressed different opinions about the nature of proposed partnerships and the role of innovations in financing of peacebuilding efforts, many voiced their support for a louder civil society local voice and leveraging long-term investment strategies.

The role of women in peacebuilding was also a recurring topic throughout different break-down sessions, with the recognition of the progress made by the United Nations and Member States in financing gender-responsive peacebuilding and several calls made for further involvement of women’s local organisations as equal partners in existing and newly-developed peace efforts.

Opening the Session, Mr. Cho Tae-yul, the Chair of the Peacebuilding Commission, has noted that there is a need for better prioritising of peacebuilding funding among the broad set of partners, while developing new impetus to strengthen partnerships for financing for peace.

For many, better prioritising means putting conflict prevention at the heart of the agenda. “As the number and severity of crises are growing faster than the available responses, conflict prevention must be taken as the priority,” reiterated Maria Luiza Ribeiro Viotti, Chef de Cabinet to the UN Secretary-General. Providing examples based on the peacebuilding spendings in 2015 and 2016, Ms. Ribeiro Viotti concluded that “the international community had spent $71 billion on United Nations peacekeeping, humanitarian aid, official development assistance (ODA), and aid to refugees in donor countries.” “We simply cannot afford to continue to spend such sums on crisis response,” she said, “and invest so little in efforts aimed at prevention”.

A Partnership Framework on building the resilience of the most vulnerable, reducing poverty, enhancing food security and promoting shared prosperity, recently signed by the UN Secretary-General and the World Bank Director, has been listed, in this vein, as a good practice. The Framework had already yielded results in Yemen, Liberia, Somalia and the Central African Republic.

Delivering a keynote address, Kristalina Georgieva, World Bank Chief Executive Officer, commended the Secretary-General for his relentless pursuit of peace. “We have to concentrate on what is it we can do together so we can make communities and countries more resilient to these shocks, and especially to the tragedy of violent conflicts”, she said. Making the case for prevention, she noted that it is much cheaper than cure, with every $1 invested leading to $16 saved. At the same time, the speaker recognised that no country, no organisation can address the challenges alone, supporting the strengthening of partnerships.

This statement was critiqued later by the representative of Indonesia, among others, who reiterated that the proposed plan of the World Bank are good “on paper”, while it is extremely hard to get one dollar or even fifty cents to strengthen prevention and peacebuilding efforts in Indonesia. There are simply no resources that are provided by international players to invest in training of women police officers in Indonesia, for example.

All speakers addressed the role of women in peacebuilding in the opening session, citing progress achieved by the UN and Member States in financing gender-responsive peacebuilding, urging the Organisation to recommit to the target of allocating a minimum 15 per cent of all peacebuilding funds to gender equality and women’s empowerment. The representative of El Salvador, responding to the statements of the speakers, also highlighted the lack of substantial gender equality. He mentioned that inviting women at the peace table is not an effective strategy, when the concept of peace is negative. The speaker, therefore, invited participants to move towards the concept of positive peace, addressed the structural relationship between war and development and invest in peacebuilding for women as positive stakeholders for peace.

The first interactive session featured some concrete examples of collaboration between different players to mobilise funding for peacebuilding and sustaining peace, including the experiences in Colombia, the current UN-World Bank partnership, and the efforts to address the Ebola Crisis.

Colin Bruce of the World Bank suggested that the elements of successful partnerships for financing of peace initiatives include: (a) inviting the “right” people to the table (including representatives of the civil society, taxpayers and others), (b) developing effective mechanisms for identifying and measuring success; (c) strengthening an accountability framework; (d) having some room for innovation. The representative of Brazil, among others, also suggested the short-sighted current approach of the UN to financing of peacebuilding efforts is ineffective, insisting on the move towards a long-term involvement and predictable and sustainable financing, with a special focus on women’s empowerment.

Inviting the international community to stop re-inventing something that has already existed for years (i.e.: conflict analysis), the representative of Quaker UN Office recommended to ensure that peacebuilding efforts are adapted to the country context. Mr. Amadu Koroma, Deputy Permanent Representative of Sierra Leone to the UN, has supported this call, inviting the participants to become serious about raising awareness and educating local actors on the benefits of entrepreneurship and supporting local peace efforts.

Abigail Ruane, Programme Director of the Women, Peace and Security Programme at WILPF, highlighted that gender and prevention are critical for sustainable peace and development. “Yet, traditional development and peacebuilding do not always lead to gender equality,” she said. Financing sustained peace therefore requires putting local women's voices and human rights at the core of all of our work. Recognising that women civil society are critical partners for peace, Ms. Ruane called on donors to ensure that gender strategies are developed and implemented in partnership with civil society, including women civil society, across all UN funds. Finally, she invited everyone to ensure that investments and partnerships strengthen, rather than roll-back, social safety nets supporting women’s livelihoods in order to respect, protect and fulfill women’s social and economic rights.

Speaking on better complimentary of the peacebuilding efforts, the representatives of the European Union and South Korea called for the re-assessing the current partnerships to ensure the best possible outcome. However, initiating the international community not to reinvent something that has already existed for years (i.e.: conflict analysis), the representative of Quaker UN Office recommended to ensure that existing peacebuilding efforts are adapted to the country context.

While opinions differ on the character of proposed changes, all participants agreed that all strategies should be geared toward prevention.

Interactive Session: “Redefining Partnership: The potential for increased collaboration in effective resource mobilisation between the United Nations and other stakeholders”

The role of inclusion for peace was a major theme of the second interactive session. The participants explored the role of private sector representatives, regional and local actors, as well as others, in ensuring predictable financing for peacebuilding and sustaining peace.

The voices of participants divided again. The representative of African Development Bank argued in support for strengthening existing partnerships, instead of redefining and reinventing them, while strengthening both hard and soft infrastructures. “We focus too much on resource mobilisation, but not on utilisation, of these resources,” the representative of the Quaker UN Office said. Others pushed for innovative approaches, which included providing financial support for investors who want to invest in the region. The Pakistani representative suggested that there is no good solution that address all country-specific situations.

Arguing that peace as a project "is simply delusional", Valentine Rugwabiza, Permanent Representative of Rwanda to the UN, said that in the post-conflict stage, his country has faced the problem of proving its credibility to its citizens. The PBC’s purpose and its partners in this process was to support the credibility of the government by providing funding for delivering concrete services, including electricity, water and other services. In this context, the inclusive government are under the burden of ensuring that different partners spending resources in Rwanda is beneficial.

Civil society’s was also challenged during the session. The representative of Rwanda suggested that civil society should not replace the government in peace work and called for balancing support efforts for both. On the other hand, Stone Conroy, Senior Manager for Strategic Partnerships from the Alliance for Peacebuilding, mentioned that including women should be facilitated only when there are specific benefits that stem out of it.

While research shows that feminist movement building is the number one predictor of policies on reducing violence against women, there is still the lack of respect for women’s local action for peace. Ruane reported that the money needed for women civil society goes to the northeastern region of Nigeria where counter-terrorism is the primary concern. This results in donor-driven priorities that are the opposite of long-term, predictable, core funding for peace.

Peter Thomson, the President of the General Assembly, reported back from a High-Level Financing Lab that occurred earlier this year at the UN Headquarters. The Financing Lab’s central message was that the financing needed to fund the SDGs already exists around the world, but the right incentives and frameworks need to be put in place to shift investments towards SDG implementation. A similar message can be concluded from this year’s PBC Session. Mr. Tae-yul outlined that partnerships with key stakeholders require overcoming existing silos, financial investments need to scale up existing resource utilisation, and the role of women should remain a priority.

Today, the international community believes that proper financing for peace requires a significant transformation of existing partnerships, new strategies for resource mobilisation, as well as a renewed commitment of all stakeholders, including civil society and private actors.

However, building peace should not be considered a project. This approach in its current framing fails to remove the global obstacles to peace, including arms proliferation, corruption, and gender inequality. It also includes shifting the balance of power in the international financial architecture in order to address systemic issues and create the conditions to respect, protect and fulfill human rights, in particular women’s rights, especially in conflict-affected situations.

Gender equality has proven to be the number one predictor of peace. Women are key to catalytic change. To achieve the Sustainable Peace Agenda for all, Member States, the UN System, and other relevant stakeholders must:

First Intervention by Abigail Ruane, Women’s International League for Peace and Freedom (WILPF), to the Peacebuilding Commission is available here>>

Second Intervention by Abigail Ruane, Women’s International League for Peace and Freedom (WILPF), to the Peacebuilding Commission is available here>>