In dark times, this image has a glorious message – resistance is not futile

This article by Suzanne Moore from The Guardian is about a recent viral photo of a woman in a protest, looking calmly at an EDL 'activist.' Her stance is a symbol of how civil society and individual people should face the current uncertainty that is our world as we protest and act. 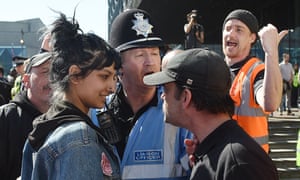 ‘The photograph of Saffiyah Khan staring bemusedly at an EDL ‘activist’ while a policeman holds him back has gone viral.’ Photograph: Joe Giddens/PA

The world is such a scary and uncertain place at the moment; there is a feeling that huge forces over which we have no control are shaping our lives. The proxy war in Syria may turn into an even bigger one, and we live in a country divided, in which a Kurdish boy was reportedly set upon by a mob. Leave.EU’s latest poster uses an image of a noose, and their “politics” is indeed that of a mob. There is terror in Westminster and Sweden. No wonder the EDLrears its pitbull head again. It is emboldened in every way .

This is the context in which the photograph of Saffiyah Khan, the young woman staring bemusedly at an EDL “activist” while a policeman holds him back has gone viral. Look at her, everyone is saying, staring calmly at him in the heat of the moment, appearing absolutely magnificent. There are more pictures of Khan being taken away by police, still smiling and revealing her Specials T-shirt. What a class act.

Khan is a brummie of Pakistani and Bosnian origin and went to the tiny EDL demo “because there is a history of harassment and assault of Muslims, vulnerable members of the public and people of colour at the demos and outside it”. She went to show her support for those the EDL want to attack. When a woman in a blue hijab was encircled by 25 or so EDL demonstrators, she stepped in. In truly patriotic, gentlemanly fashion, the leader of the EDL, Ian Crossland, commented on Facebook: “She’s lucky she’s got any teeth left.” Tommy Robinson said on Twitter that her story was a lie and that she had interrupted a minute’s silence for the victims of the Westminster attack. He later said she may well be telling the truth. Indeed, you can see what happens in a video. The EDL demonstration is small and pathetic.

Khan makes it look even smaller and more pathetic. This is the potency of the image. Female insouciance against fascism takes a special bravery. It signals to us that we all might be braver, that we can stand up and fight, that men who cannot tolerate difference cannot tolerate being laughed at either. 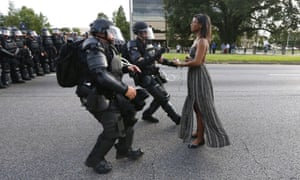 The photo of Ieshia Evans in a flimsy summer dress facing a line of heavily armed police at a Black Lives Matter protest in Baton Rouge also went around the world. The dignity of her stance against a militarised police force summed up so much about injustice. As she stood there, the image showed two policemen about to slap handcuffs on her and drag her away. There was also a fantastic 2015 photo of Jasmina Golubovska, a woman in Skopje, Macedonia, putting her lipstick on in the middle of a crush of riot police, using a riot shield as her mirror.

These visual symbols of individual women refusing to be intimidated, their stillness, their presence of mind, is stirring. Khan’s no-nonsense attitude – that another woman should not be harassed – reminds us that solidarity rests on assuming power, not giving it away. We see both the possibility and dignity of resistance, the ability of one person to make a difference. Much of life isn’t full of heroics. We are often cowed by fear, by apathy, by the idea that nothing can ever change, that the bad people are in charge, that to intervene is to risk harm or to make any situation worse.

Khan’s small act of resistance then becomes larger, so welcome, so cheering, and so monumentally cool. Rosa Parks said: “You must never be fearful about what you are doing when it is right.”

This is the joy of Khan’s fearlessness. Hands in her pockets, deeply unbothered by angry ranting men, her smile has spread far and wide because it is an image of undeniable strength and power. Glorious.