Security Council Open Debate on the Maintenance of International Peace and Security, November 2016 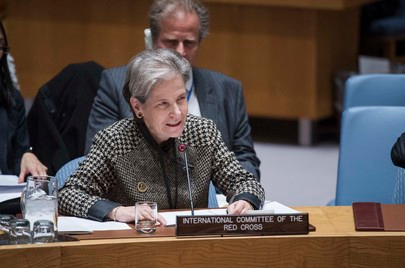 The Security Council Open Debate entitled, “Maintenance of International Peace and Security- Water Peace and Security” was convened by the Council’s current president, Senegal, on 22 November, 2016. Prior to the debate Senegal released a concept note which framed the meeting as an opportunity for “profound reflection” concerning water’s role as both a pillar of development and a driver of conflict. The statements delivered reflected broad concern for water scarcity as a catalyst of instability and its likelihood to worsen as a result of climate change. A majority of states advocated for joint water management and transboundary cooperation, the protection of water supplies during times of conflict, and mitigating threats to global supplies. Among a small number of gender-sensitive statements, member-states highlighted specific elements of the WPS Agenda, ranging from sexual and gender-based violence (SGBV), to participation, and peace processes.

A total of 68 statements were delivered at the meeting. Secretary-General Ban Ki-Moon opened the debate with a statement emphasising water security as a path to sustainable peace and condemning the destruction of water resources in conflict. The Secretary-General  described the United Nations’ (UN) efforts to promote hydro-diplomacy and called on member-states to adopt the High-Level Panel on Water and Peace’s action plan. The chair of the High-Level Panel, Danilo Turk, followed the Secretary-General, highlighting the positive relationship between water cooperation and peace. Mr. Turk presented data indicating that when active transboundary water management occurs between states sharing river basins, the parties involved are far less likely to engage in conflict.

Speakers including the representative of the International Committee of the Red Cross (IRCR) illustrated the impact of conflicts in Syria, Iraq, the Democratic Republic of the Congo (DRC), and Senegal on local water supplies, which exacerbate humanitarian crises and increase threats on vulnerable populations.

Many West African States utilised the shrinking of Lake Chad as another example of water’s link to conflict, delineating the ways in which the resulting poverty and instability have enabled the spread of extremist groups like Boko Haram. Another key theme throughout the debate was the role of water as a conflict resource, and its restriction or destruction by combatting parties, as has recently been demonstrated in the Israeli-Palestinian conflict.

Of the 68 statements delivered at the debate, 8 (12 percent) speakers addressed issues relevant to women, peace and security. The most common issue discussed straddles themes of protection, human rights, humanitarian response, and sexual and gender-based violence (SGBV). Representatives of Australia, the IRCR, and the Secretary-General expressed concern for the vulnerability placed on women and girls responsible for water collection, noting that travelling long distances for water causes susceptibility to violence. The representatives of Bangladesh and Palau addressed the same issue, with the perspective that time spent collecting water detracts from the education and empowerment of girls. Additionally, Poland and the United States highlighted the instability imposed by water scarcity in contributing to sexual violence and human trafficking. Australia, South Africa, and the Secretary-General offered the most substantive statements on gender in Water, Peace, and Security, noting that despite the vital role women play in safeguarding water supplies, their roles are scarcely reflected in water management systems. These speakers advocated for women’s active participation and decision- making in water governance. The Secretary-General also emphasised the likelihood of women engaged in peace processed to advocate for water management.