Security Council Open Debate on the Maintenance of International Peace and Security, August 2018 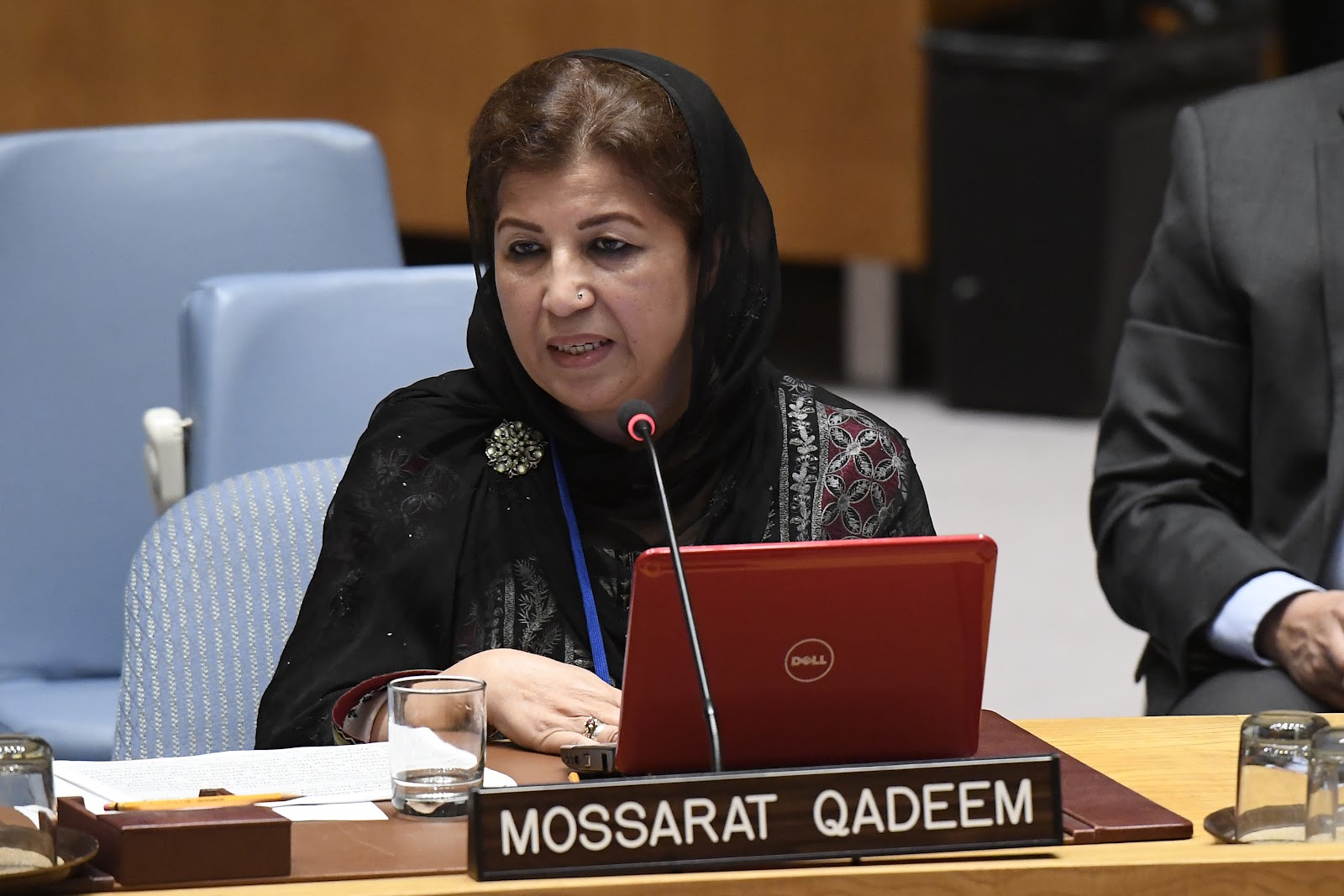 Mossarat Qadeem, Co-founder of PAIMAN Alumni Trust, addresses the Security Council meeting on the maintenance of international peace and security, with a focus on mediation and settlement of disputes (Photo: UN Photo/Evan Schneider)

On 29 August 2018, under the Presidency of the United Kingdom, the United Nations (UN) Security Council convened an open debate on the use of mediation for conflict prevention. Briefers and representatives of Member States used the debate as an opportunity to both highlight good practices as well as address problems in the current practice of mediation. As a whole, the debate provided space to discuss women’s valuable contribution to sustainable peace, including as mediators in both UN and regional mechanisms. Women mediation networks that were referenced during the debate, including FemWise, Mediterranean Women Mediators Network, Nordic Women Mediators and Women on the Frontline, were highlighted as good practices that provide opportunities for women mediators to share their expertise and collaborate on enriching future work in mediation.

In the opening statement to the Council, the UN Secretary-General addressed the importance of working with local mediation actors to find comprehensive solutions for peace settlements. The Secretary-General also presented his High-Level Advisory Board on Mediation, which was established in September 2017 to “provide advice on mediation initiatives and back specific mediation efforts around the world”. The Right Reverend Justin Welby, the Archbishop of Canterbury and a board member of the Secretary-General’s High-Level Advisory Board on Mediation, mentioned his new initiative called Women on the Front Line, which serves to support women in different contexts and has already been introduced in Burundi and South Sudan.

Civil society speaker Mossarat Qadeem of the PAIMAN Alumni Trust focused her statement on the necessity of women’s participation in mediation and the peace processes, particularly since women who were qualified mediators could use their soft power to dig into deeper issues and effectuate real change in communities. "In mediation you must speak to each person's core humanity”, Qadeem noted. “Believe me, it breaks the barriers”.

Several representatives of Member States used the debate as an opportunity to share best practices in mediation through recent examples of successful peace process outcomes. The representative of the United Arab Emirates highlighted the success of the mediation in the recent Eritrea and Ethiopia peace agreement, while the representatives of Cuba and Pakistan recalled the effective role that regional organisations, as well as NGOs, played in the Colombian peace process. The representative of Djibouti stated his support for the introduction of a new time-limited settlement between Djibouti and Eritrea with pending approval that the dispute can be sent to the International Court of Justice.

Another popular theme was the importance of engaging regional organisations in peace process and mediation mechanisms. In this context, the representative of India suggested that the UN should remove itself from the center of mediation efforts and instead serve as a support-system for regional organisations to take the lead role in future mediation. Offering a critique that was based on previous experiences with UN mediation mechanisms, the representative of Cyprus noted the necessity for the UN to provide a framework for a code of conduct for future efforts with mediation and peace processes. 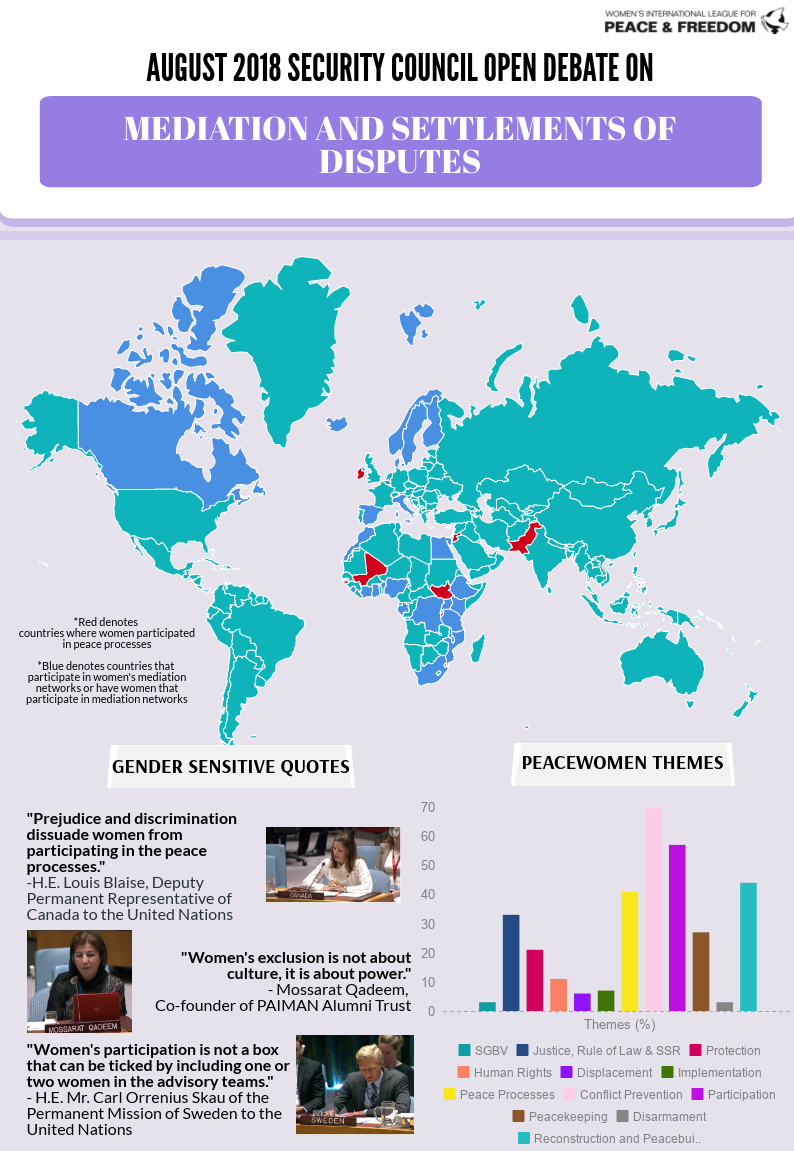 As a whole, the gender dimension was integrated throughout the discussion on mediation, with specific attention given to women’s participation and agency. In total, 49 (70%) representatives of Member States and briefers affirmed the importance of inclusive mediation and settlement of disputes through integrating women in the peace processes, with 16 (33%) of these 49 representatives advocating for specific initiatives or highlighting concrete examples that show how women’s mediation is crucial for successful peace processes.

The most prominent theme in the debate was women’s participation, with 22 (31%) speakers, including the Secretary-General, the Archbishop of Canterbury and Ms. Qadeem, highlighting the importance of women’s participation in mediation. Many of the representatives’ statements included concrete examples of participation of women as mediators in peace processes. For example, Ms. Qadeem referenced the initiative of women in mediation talks with the Taliban; the Representative of Ireland highlighted the important role of women in the Good Friday Agreement between the Republic of Ireland and Northern Ireland; and the Representative of Brazil noted that women mediators in Guinea-Bissau were able to effectuate change by opening up a network of dialogue between warring parties during a stalemate of peace talks. Additionally, the representatives of Liechtenstein and Poland cited evidence that peace processes, which included women, were more likely to work for a longer period of time.

Although the theme of conflict prevention was referenced by 49 (70%) of representatives and briefers, only four (5%) of speakers were gender-sensitive in their references. The representative of Poland noted that women-led prevention mediation efforts were important since women could detect early-warning signs of fundamentalism in communities, while the representatives of Estonia, Italy and Kenya all stressed the importance of inclusivity, particularly for women, in preventing conflict. Overall, the majority of references to prevention lacked substantial references to how women’s roles in conflict prevention is crucial to achieving sustainable peace.

A notable gap in the discussion was the failure of many representatives to link the call for increased participation of women as mediators in peace processes to the Women, Peace and Security Agenda, particularly Resolutions 1325 (2000), 1889 (2009) and 2242 (2015). The lack of discussion of the WPS Agenda failed to both provide an integrated approach across different peace and security issues as well as build on the current achievements and address ongoing challenges around the WPS implementation. Only 12 (17%) speakers recalled the importance of implementing the WPS Agenda in future discussions on mediation. As highlighted by the representative of Indonesia, integrating the WPS Agenda into the conversations on mediation and peace processes would translate resolutions and rhetorical support into the groundwork.

This debate made an important contribution towards the promotion of women’s meaningful participation in the peace process as mediators. To ensure that debate’s call to actions are moved forward, the following actions are recommended:

Concept Note for the Open Debate on “Maintenance of international peace and security: mediation and settlement of disputes" 29 August 2018