Security Council Open Debate on The Middle East, Including the Palestinian Question: April 2017

Security Council Open Debate: The Situation in the Middle East Including the Palestinian Question 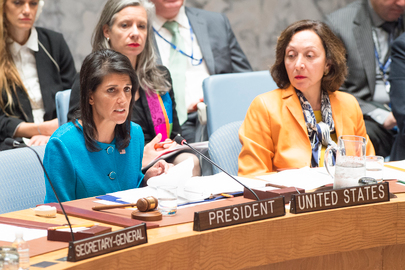 Nikki Haley (left), United States Permanent Representative to the UN and President of the Security Council for April, addresses the Council's meeting on the situation in the Middle East, including the Palestinian question. At her side is Hasmik Egian, Director of the Security Council Affairs Division, Department of Political Affairs. UN Photo/Eskinder Debebe

The Security Council Open Debate entitled, “The Situation in the Middle East, Including the Palestinian Question” was convened by the Council’s current president, the United States of America, on 20 April, 2017. The meeting’s concept note framed the event as an opportunity for the international community to identify key players in the region, address threats to international peace and security, and ensure ‘bad actors’ do not benefit from peacebuilding efforts. Speakers at the debate highlighted the role of the Israeli-Palestinian Conflict in destabilising the entire Middle East region and demanded the cessation of all hostilities to facilitate the return to diplomatic solutions. Member State representatives also underscored the crises in Syria, Yemen and Lebanon, calling for increased humanitarian support, meaningful dialogues and services for vulnerable populations such as refugees and internally displaced persons. Overall, the debate lacked any substantive gender perspective, with only 13 percent of speakers offering any reference to the protection or human rights of women and girls in the region.

A total of 53 statements were delivered at the debate. The Special Coordinator for the Middle East Peace Process, Nikolai Mladenov, briefed the Council regarding the latest developments across the region. He noted that political divisions render crisis situations vulnerable to foreign intervention and manipulation, and identified justice, dignity and social cohesion as fundamental prerequisites for peace. Mladenov’s briefing was followed by statements from the representatives of Israel and Palestine, each of whom condemned the actions of their opponents. Member State representatives issued broad condemnations for the colonisation, fragmentation, and annexation of Palestinian territories, as well as reaffirming the violation of international law posed by Israeli settlements. Speakers further denounced the role of violent extremism in the conflict, expressed concern over the humanitarian situation impacting Palestinian civilians, and encouraged all parties involved to fully implement Resolution 2334 (2016). 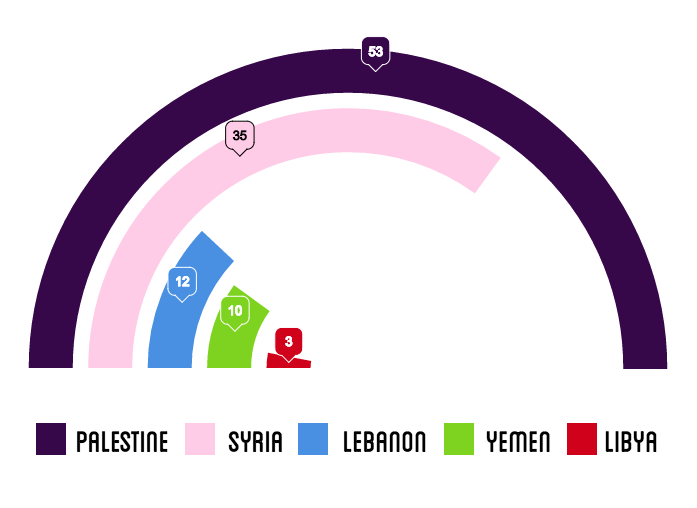 Despite the vague and narrow scope of the agenda, crises in Syria, Lebanon, Yemen and Libya drew considerable attention of the Council.

A majority of speakers condemned the April 7 chemical attacks in the Syrian town of Khan Sheikhoun, which the Organisation for the Prohibition of Chemical Weapons (OPCW) has identified as a result of Sarin Gas. Representatives including those of France, Italy, Liechtenstein, Brazil, Indonesia and Turkey demanded accountability for the attacks via independent investigation. A secondary focus of discussions on Syria was the Israeli occupation of the Syrian Golan Finally, which was widely denounced as an additional violation of international law and source of instability in the region. The representatives of Chile, Costa Rica, Haiti and Ukraine encouraged the permanent members of the Council to refrain from using their veto powers on issues of significant humanitarian concern, such as the Syrian crisis.

Having resolved the political deadlock preventing the Lebanese Parliament from electing a President in December, representatives at the debate now pressed state powers to proceed with planned legislative elections to ensure the government continues to fully function. Limited references addressed the implementation of the UN Interim Force in Lebanon’s (UNIFIL) mandate and the need for state powers to abide its dissociation policy regarding Syria. The representative of Lebanon emphasised the recent Shebaa Farms maritime border dispute between Lebanon and Israel, which holds the potential to exacerbate tensions between the two states.

Member State Representatives afforded particular attention to the humanitarian needs of more than 19 million Yemeni citizens facing famine and violence amidst the deteriorating conflict between the state and the Houthi opposition. Representatives of Oman, Japan, and Indonesia called attention to the displaced Yemeni population and called for increased victim’s services to protect and empower these groups. On the other hand, representatives of Ukraine and Kazakhstan emphasised diplomatic solutions and called for a return to the negotiating table.

Representatives of Japan, the Russian Federation, and Special Coordinator Mladenov were the only speakers to address the situation in Libya. The latter speakers focused their statements on the threat of extremist and non-state militias in the territory, while the representative of Japan called for increased international support to ensure the return of stability.

Nearly 87 percent of speakers at the debate failed to address issues relevant to Women, Peace, and Security (WPS). While referencing women, the representatives of Palestine and Costa Rica did not award any substantive attention to the topic, alluding only to the impact of the relevant crises on both men and women. Similarly, the representative of Israel only referenced women as a tool to illustrate the crimes of Hezbollah, stating that the organisation has been known to use Lebanese women as human shields.

Of the 53 delivered statements 2 (3.77 percent) referenced women’s human rights. Most notably, the representative of Japan relayed the state’s efforts to economically empower women and youth in areas impacted by conflict or humanitarian crisis. Statements delivered by the representatives of Uruguay and South Africa (3.77 percent) addressed the protection of women and girls. The former discussed the vulnerability of Syrian women and girls, while the latter emphasised the plight of Palestinian women living under Israeli occupation.

Limited attention was also afforded to displaced women and women’s participation in peace processes. The representative of Japan described the state’s initiative to improve the situation of women and children in displacement camps through the provision of handbooks which allow mothers to track the health conditions of their children. On the other hand the statement delivered by the representative of Norway highlighted the critical role women can and must play in the Syrian peace process.

The April 20 debate digressed into a series of squabbles between the representatives of opposing parties in a range of conflicts. Amidst unsubstantiated, even outrageous, accusations levelled against political opponents and statements deferring blame of any responsibility for the varying crises in the region, few remarks reflected any genuine desire to broaden international cooperation, resume negotiations, and achieve sustainable peace. The overtly politicised nature of the discussion was only superseded by the fundamental failure to address the root causes of conflicts in the Middle East: namely militarisation, authoritarianism, political and economic inequality and the oppression of marginalised populations such as women and girls.

For progress, the Security Council, UN Member States, and other relevant parties must:

Special Coordinator for the Middle East Peace Process, European Union, Committee on the Exercise of the Inalienable Rights of the Palestinian People, and the Holy See

Concept Note: Security Council Open Debate on the Situation in the Middle East Including the Palestinian Question