Security Council Open Debate on The Middle East, Including the Palestinian Question: October 2017 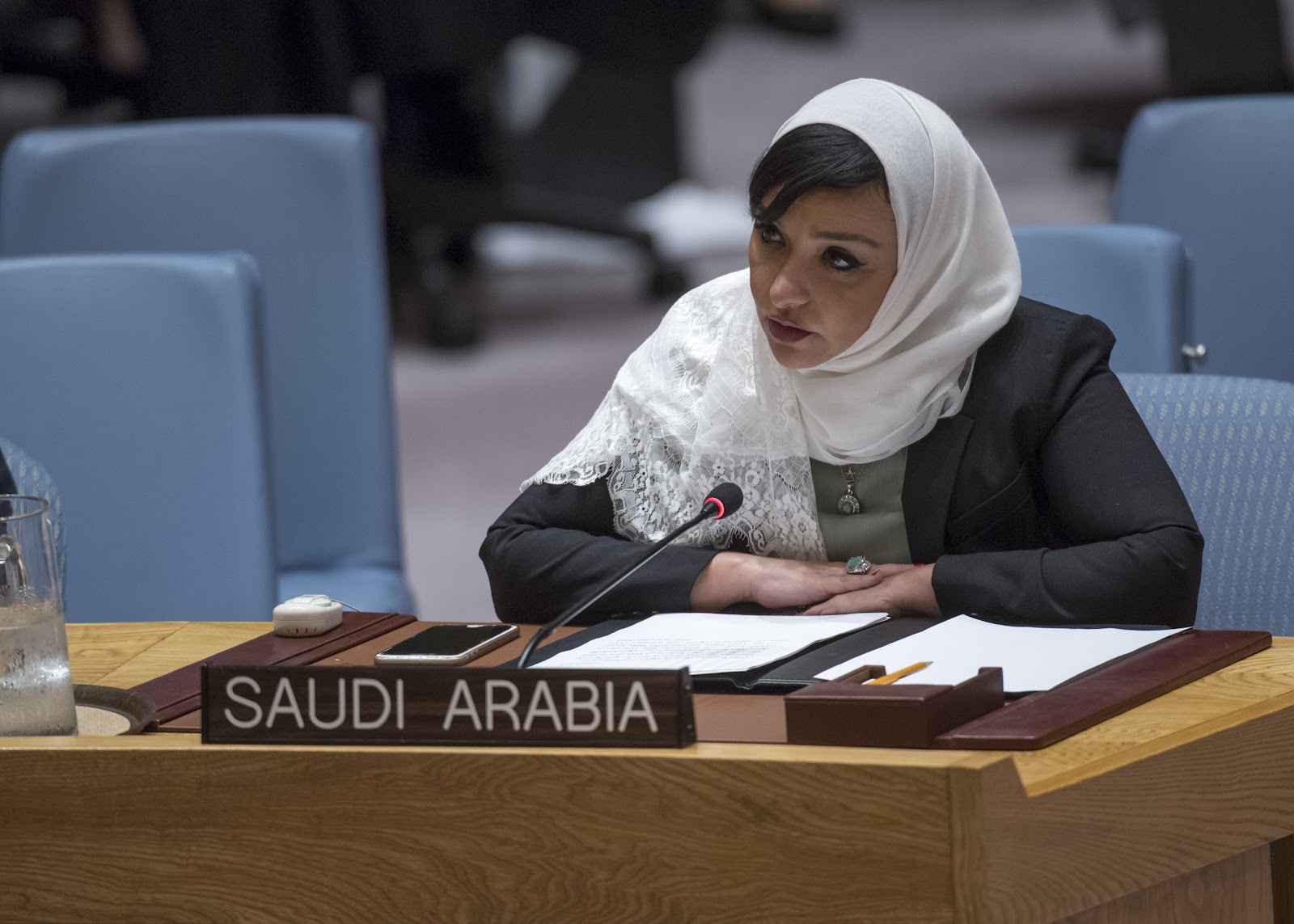 The representative of Saudi Arabia addresses the Security Council meeting on the situation in the Middle East, including the Palestinian Question (Photo: UN Photo/Cia Pak).

On 18 October 2017, under the Presidency of France, the  Security Council held  its quarterly open debate under the agenda item “The situation in the Middle East, including the Palestinian Question”. The debate provided an opportunity for Member States to exchange views on how to best support the Middle East peace process following the signing of a unity agreement between the Fatah and Hamas on 12 October 2017 in Cairo. Despite the overall negative trajectory that has characterised the Israeli‑Palestinian conflict for far too long, speakers at the debate presented the recent agreement as a reason for cautious optimism as the Intra-Palestinian agreement is hoped to alleviate the humanitarian catastrophe in the Gaza Strip. Most speakers however expressed their worry at the lack of progress towards a political settlement between Israel and Palestine. Women’s experiences of conflict in the region and the need for their inclusion in peace processes were mostly left out from the discussion, as speakers prioritised giving their views on the new agreement.

The debate came a month before the 50th anniversary of Resolution 242 (1967), which established the principles that were to guide the negotiations for an Arab-Israeli peace settlement. Fifty years and numerous UN resolutions later, the political status quo is as static as ever. While the Palestinian reconciliation agreement is a welcomed development as it represents a step forward towards Palestinian unity, expectations of success were tempered at the debate by the knowledge that many previous Palestinian initiatives have failed. At the debate, speakers expressed their continued discontent at the slow progress in the implementation of Resolution 2334 (2016). Moreover, speakers reiterated their calls to the Israeli and Palestinian authorities to refrain from provocative action, incitement and inflammatory rhetoric. They once again condemned Israel’s continued planning for settlements -which are in violation of Council resolutions- and voiced support for the self‑determination of the Palestinian and its right to a sovereign State within the pre‑1967 borders. However, no concrete steps for further action were proposed throughout the day.

Concerning the regional situation, speakers expressed regret at the lack of progress on the political and humanitarian fronts in both Syria and Yemen. A majority of Member States called on the UN to adopt a united front to fight terrorism across the region following the recent advances in fighting ISIL/Daesh. While the overall debate disappointedly showed no signs of stern commitment to advance peace in the Middle East, ever more disappointing was the complete oversight of women’s role as peacebuilders in the region. In the past month, thousands of Israeli and Palestinian women have united in a two‑week march for peace. Yet, these grassroots initiatives by civil society, which are critical to building the foundations of peace, were only mentioned once at the outset of the debate.

Speakers at the debate welcomed the signing of an agreement by Fatah and Hamas by which the Palestinian Authority would take control of the Gaza crossings on 1 November and should assume its full responsibilities in Gaza by 1 December. Most of them also commended Egypt for its role in facilitating negotiations. The return of Gaza to the full control of the legitimate Palestinian Authority is an important development, which could bring an end to Gaza’s suffering and possibly advance the political stalemate. The Assistant Secretary-General for Political Affairs however noted there are no provisions relating to elections, or to the Disarmament, Demobilisation and Rehabilitation (DDR) of Hamas fighters in the agreement, which continues to impede the possibility of sustaining peace in the region. Concerning the statements of other main stakeholders in the discussion, the representatives of the observer state of Palestine and Israel did not find common ground for building peace. Moreover, the representatives of Israel and the United States seemed to have mistaken the agenda of the day with the situation in Iran, in a clear effort to avoid discussing about their lack of committed engagement in peace.

Concerning the issue of settlements, speakers expressed outrage at Israel’s blatant violations of international law and Resolution 2334 (2016) as it announced more than 10,000 new units this year in both the West Bank and East Jerusalem - more than twice as much as in the whole year of 2016. The majority of speakers joined their voices in condemning each of these illegal acts in the strongest terms. The representative of Japan reminded the audience that Israel’s expansion strive physically erodes the possibility of a two-states solution, which he re-stated, constitutes the only viable solution to peace. The president of the Council in his capacity as representative of France, called for a redoubling of efforts to find a lasting solution.

At the outset of the debate, the Assistant Secretary-General for Political Affairs drew increased attention to the severity of the humanitarian crisis in the Gaza Strip. He reported that the enclave’s 2 million people have been living with electricity for a mere four to six hours a day. He said the outages disrupt the water supply and sanitation systems in Gaza, describing the enclave as an “unfolding environmental disaster with no regard for borders”. The representative of Japan announced his government had donated 20 million dollars in aid to Gaza to develop a sewage network. In response, the representatives of Sweden and Cuba urged Israel to lift its 10-year old blockage of the Gaza Strip to allow access for humanitarian relief in Gaza.

On Syria, states welcomed the country’s advances in fighting ISIL/Daesh, but expressed regret at the lack of progress on the political and humanitarian fronts. The representatives of Jordan and Sweden mentioned the importance of making sure humanitarian action can be delivered throughout the country, as well as in Iraq.

Humanitarian support was also mentioned in the context of Yemen, where the continuing absence of dialogue is further fragmenting the Yemeni political landscape and worsening the “triple disaster” of famine, conflict and cholera across the country. The representative of Uruguay urgently called all stakeholders to return to the negotiating table.

On Libya, states welcomed the resumption of negotiations under the auspices of the United Nations.

In Lebanon, the situation has remained quiet along the Blue Line. Italy welcomed the renewal of UNIFIL until August 2018, while Kazakhstan called for increased financial and technical support for the Lebanese armed forces.

Despite the much needed recognition of the gendered impact of the Israeli-Palestinian conflict -especially in Gaza- and the acknowledgement of women’s organisations as indispensable partners in the search for peace in the Middle East, the debate was almost entirely gender-blind.

As previously stated, the Assistant Secretary-General for Political Affairs was the only speaker to refer to the two-weeks march for peace led by Women Wage Peace and attended by thousands of people through Israel and the West Bank. The march sent a clear  message to leaders to work toward a negotiated solution to the Israeli-Palestinian conflict and to make sure women have equal representation in any talks. Women peacebuilders have long carried the message of peace in the Middle East, calling for an end to conflict and acting as informal mediators in their communities. As requested by the Secretary-General in his latest report on Women, Peace and Security, and by the Assistant of the Secretary-General for Political Affairs at the debate, women civil society organisations must be supported as they are critical for building the foundation for peace. Moreover, in future talks, Member States, and the representatives of regional powers in particular, should highlight the importance of including a gendered lens in their analysis of the conflict and ensuring their presence in the peace talks.

Moreover, speakers failed to address the gendered dimension of the current humanitarian crisis in Gaza. Indeed, gender inequality exacerbates the emergency-related obstacles to safe access to food, water, sanitation, hygiene, healthcare and education in Gaza. To effectively alleviate the humanitarian crisis in Gaza, member states must help the Palestinian Authority address the specific ways in which women are disempowered under occupation, when and if it regains control of Gaza in December, as per the Cairo talks.

The discussion and policies around addressing the situation in the Middle East remain gender-blind despite women’s organisation’s increased efforts at being included in the various discussion and institutions tasked with implementing peace. For progress, the Security Council, Member States and other relevant parties must:

Meeting Record Security Council Open Debate on the Situation in the Middle East including the Palestininan Question: October 2017