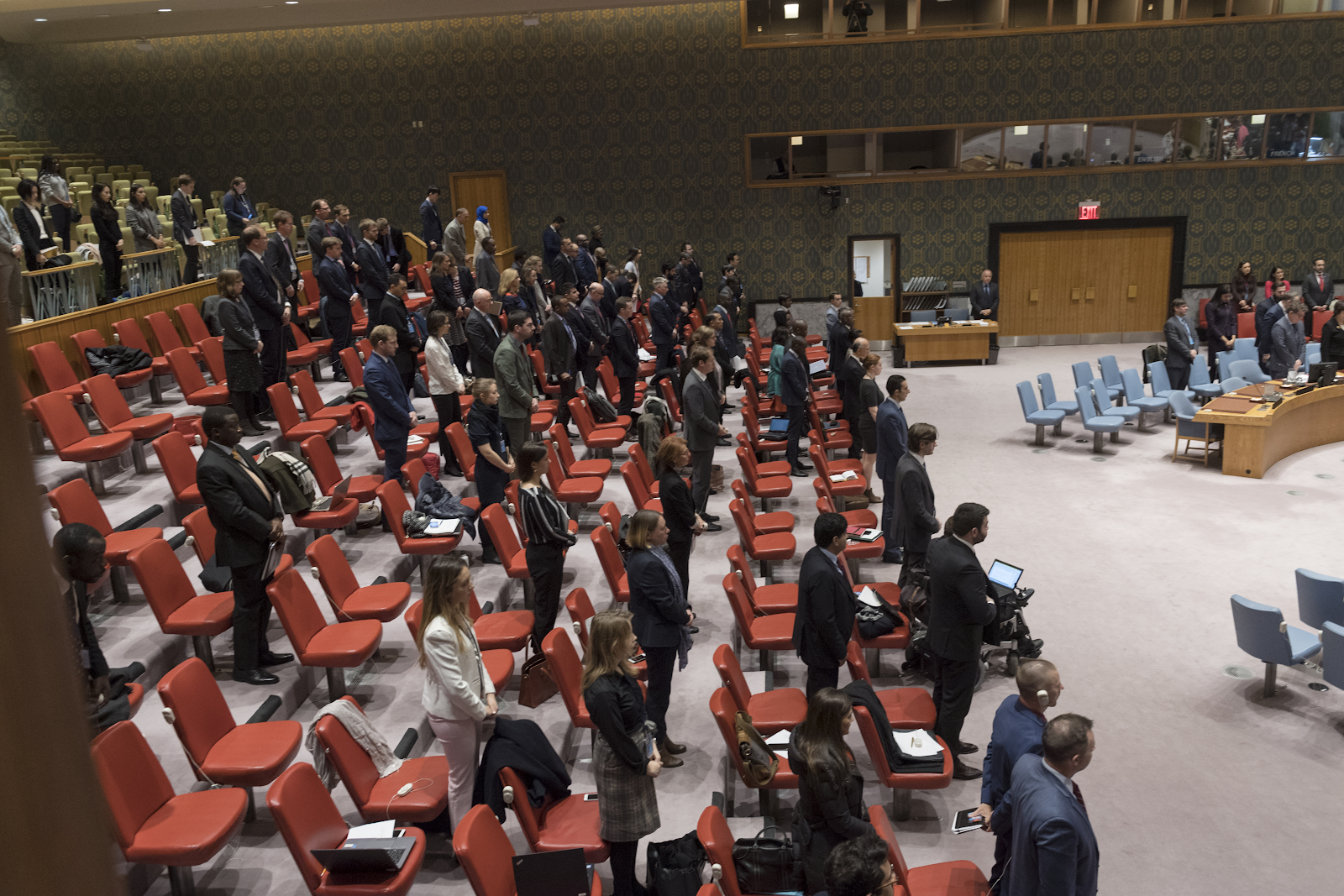 Prior to the Security Council meeting on strengthening peacekeeping operations in Africa, Security Council members and other attendees stand for a minute of silence to honour peacekeepers, six Malawian and one Tanzanian, recently killed in the line of duty while serving with the UN Organization Stabilization Mission in the Democratic Republic of the Congo (MONUSCO). (Photo: UN Photo/Rick Bajornas)

The United Nations Security Council (UNSC) open debate on peace and security in Africa was convened on 20 November 2018 at the United Nations Headquarters in New York. Held during the UNSC Presidency of China, the debate focused on strengthening peacekeeping operations in Africa. Overall, it provided an opportunity for representatives of Member States, the Observer State of the Holy See and regional organisations to share both their progress and contributions to maintaining peace and security in Africa as it related to strengthening peacekeeping missions in the continent. In recognition of the strong Women, Peace and Security Framework in Africa, several speakers used their statements as an opportunity to highlight their commitments to advancing gender considerations in peacekeeping work, such as reducing Sexual Exploitation and Abuse (SEA) by peacekeepers. However, the majority of these references were in support of increasing the participation of women as officers or military observers in peacekeeping, which perpetuates the concept of militarisation in maintaining peace and security.

The Secretary-General opened the debate by highlighting the current context of United Nations peacekeeping, with Africa hosting the largest number of peacekeeping missions. Based on these numbers, the Secretary-General noted strengthened partnership between the UN and the African Union (AU) in order to increase ownership at the regional and national level of peace and security. Briefer Smaïl Chergui, the African Union Commissioner for Peace and Security, shared progress on the strategic partnership between the AU and the UN, including incorporating existing frameworks of human rights and international humanitarian law into peacekeeping in the region. Chergui called attention to a forthcoming UNSC resolution, which is expected to be drafted by Cote D‘Ivoire during their UNSC presidency in December 2018, on supporting peacekeeping reform.

Within the context of peacekeeping missions on the African continent, the representatives of Member States, the Observer State of the Holy See and regional organisations used the debate as an opportunity to highlight the necessity of reliable financing, regional partnerships (particularly with the AU) and key initiatives, in order to ensure that Member States in Africa possess national ownership in future decisions related to maintaining peace and security in the region. Key initiatives were highlighted by Member States in their overview of assistance, including the African Union Peace Fund of 2018, the AU-UN Framework of 2017 and the Elsie Initiative. While the first two initiatives are broader in their scope of assistance, Canada’s Elsie Initiative supports the deployment of more women as military and police peacekeepers to peace operations.

Overall, references to themes of women, peace and security (WPS), primarily to the participation of women in peacekeeping operations and combating SEA, were made by 25 (~46%) out of 54 speakers. Unfortunately, the majority of these references were made in the context of supporting the deployment of more women as military or police peacekeepers, rather than as gender advisers. The link between gender and peacekeeping should not center on militarisation, but rather on the effective integrative of gender analysis into peacekeeping missions. Furthermore, given the nature of the debate, the lack of references to disarmament and prevention were missed opportunities since they related directly to identifying root causes in maintaining peace and security in the region.

SEA was a prominent theme in representatives’ statements, with 10 (40%) of the 25 speakers highlighting the importance of strengthening mechanisms of SEA in peacekeeping missions. In this regard, the representatives of Estonia, Ireland, Norway, Senegal and the United Kingdom all highlighted the importance of implementing the zero-tolerance policy of sexual exploitation and abuse in peace support operations, while the representatives of Italy and Poland shared their support for implementing SEA mechanisms to protect women and girls. Unfortunately, these mechanisms of holding perpetrators of SEA accountable are not legally binding, which often perpetuates the culture of impunity.

Prevention
While 19 (~35%) of the 54 representatives mentioned the importance of conflict prevention in maintaining peace and security in Africa, this was a missed opportunity in the discussion of strengthening and mainstreaming gender in peacekeeping missions. In particular, while some representatives noted the importance of prevention in peacekeeping missions, not enough attention was paid to the critical role of identifying root causes of conflicts, as well as the role of peacekeepers in the process. For example, the representative of Bolivia highlighted the role of the UN in identifying root causes, while the representative of Peru noted the importance of developing regional capacities for maintaining peace and security through tackling root causes. Furthermore, both the representatives of Argentina and Switzerland called attention to the link between human rights and root causes in the development of holistic peacekeeping operations. However, for the majority of speakers, this was a missed opportunity, especially considering the Secretary-General’s Prevention Agenda, which highlights the importance of prioritising and preventing early conflict and ensuring measures to prevent relapse into the conflict. Furthermore, a priority on prevention is critical to implementing the WPS Agenda, which notes the gendered impact of violence against women and girls in conflict settings, as well as ending the limitation of women’s access to resources, as mentioned by the Secretary-General in his most recent report.

Disarmament
Another missed opportunity was the discussion of disarmament as it relates to the peacekeeping context. Unfortunately, only 12 (~22%) of the 54 representatives referenced disarmament, primarily within the context of the aforementioned Silencing the Guns initiative. Unfortunately, references to this initiative did not include the report’s references to the disproportionate impact of violence against women and the necessity to increase the role of women in conflict prevention; therefore, the link of disarmament to overall peacekeeping efforts in maintaining peace and security in Africa was a missed opportunity. The few non-gender-sensitive references to disarmament included the representative of the Observer State of the Holy See, who noted the comparison between the budget of global military spending to the budget of UN peacekeeping, and the representatives of Brazil, Egypt and Sweden, all of whom noted the problems with focusing on military solutions in ending conflict.

With the exception of brief highlights from Sierra Leone and Sweden, no representatives made reference to the importance of incorporating the perspective of civil society into peacekeeping operations. Good practices of civil society’s engagement at the grassroots level has been noted with the United Nations Organization Stabilization Mission in the Democratic Republic of the Congo (MONUSCO) in the DRC; however, the lack of Member States’ engagement on the discussion during the debate, as well as the absence of a civil society speaker to brief the UNSC, was a missed opportunity for demonstrating peacekeeping engagement at the local level.

Simply increasing women’s participation in peacekeeping is not a solution for sustainable peace. While peacekeeping missions are becoming increasingly militarised, adding women into militarised and patriarchal structures alone will make little difference for the sustainability of peace. Another step that is necessary to dismantle the patriarchy for gender equality is to challenge the military industrial complex. This includes addressing notions of security, logic, rationality, profit and success. For example, the military industry promises security to all citizens. However, arms do not lead to increased security, and in fact, as WILPF research shows, may lead to increased risks for women. We need to meaningfully challenge harmful social norms, practices, stereotypes, and dismantle patriarchal power inequalities that impede the realisation of the human rights and fundamental freedoms of all women and girls.

Moving forward, future UNSC convenings on the topic of peace and security in Africa, particularly as they relate to peacekeeping operations in the region, should include the following gender-sensitive recommendations: