Security Council Open Debate on the Protection of Civilians in Armed Conflict, June 2016

Open Debate: Protection of civilians in the context of peacekeeping operations.

On Friday June 10, 2016, under the French presidency, the Security Council held a ministerial-level open debate under the theme, "Protection of civilians in the context of peacekeeping operations." The debate was intended to continue discussions on the reform of peace operations, which featured in the United Nation’s three major reviews last year—the High-Level Independent Panel on Peace Operations (HIPPO) report, the Advisory Group of Experts report on Peacebuilding, and the Global Study on the Implementation of Resolution 1325 on Women, Peace and Security—as well as in the General Assembly’s High-Level Thematic Debate on Peace and Security on 10 and 11 May. In line with the discussion developed in the concept note, speakers discussed venues through which relevant regional and international organisations can be encouraged to take the protection of civilians into account; local-level protection capacities can be developed; and partnerships with humanitarian actors can be strengthened. One of the main focuses of the debate was the Council’s peacekeeping-reform agenda in the context of emerging threats from non-State actors. Speakers called for clear protection mandates that should be effectively implemented as a part of a coherent strategy. According to the majority of speakers, ensuring that deployed personnel have a clear understanding of tasks and effective training is of crucial importance. 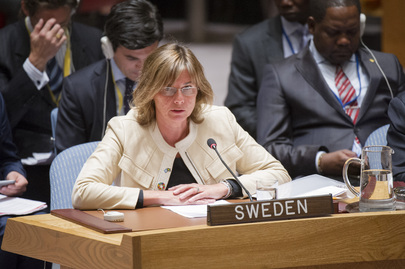 Governments and parties to conflict also had a responsibility to uphold their protection responsibilities, ensure compliance with international law, and take precautions to prevent harm to civilians. However, the representative of the Central African Republic highlighted that states need the unfailing support of the international community to ensure the lasting protection of the people. Speakers stressed that financial assistance to the parties to the conflict and the existence of  peacekeeping missions with clear mandates are not enough.

The credibility and legitimacy of United Nations (UN) Peacekeeping largely depends on the capability to act when civilians were under threat. Presenting his report on the protection of civilians in armed conflict, UN Secretary-General Ban Ki-moon said the Secretariat was doing its utmost to support missions through a renewed focus on performance and accountability. Speakers condemned instances of sexual abuse by United Nations peacekeepers and emphasized that all perpetrators must be brought to justice. The representative of Nepal announced that the Nepal Army, Nepal Police and Armed Police Force of Nepal had integrated UN policies on civilian protection, sexual exploitation and abuse, and protection of human rights into pre-deployment training.

Another weaknesses of the peacekeeping mandates - the use of force - was also widely discussed. Since there is no set standard on the use of force, speakers were divided in their opinions. In this vein, representative of Brazil suggested that military action is not a panacea for the protection of civilians. However, the Representative of Argentina emphasized that lessons must be learned from the failure of the use of force to protect civilians in the former Yugoslavia and Rwanda.

Further expanding the discussion on the need to pursue non-violent means of protecting civilians, speakers suggested that the international community has to take action to end the proliferation of small arms and light weapons (20%). In this vein, the representative of the Holy See claimed that a sure way to protect civilians was taking a preventive approach, which included the limitation on the manufacture, sale, and gifting of weapons.

Finally, speakers also highlighted the importance of engaging with local stakeholders, including civil society, as a means to build trust and gain a deeper understanding of challenges on the ground. The representatives of France and Estonia suggested that relations with local actors and non-governmental organizations play an important role in providing United Nations peacekeepers with information that could help prevent and stop violations.

Out of the 76 statements delivered, only thirty-four speakers (45.34%) used a specific gendered language. In the briefing, United Nations Secretary-General Ban Ki-moon stressed that “no amount of strategy, resources or accountability would mitigate the grave and tragic consequences of war for ordinary women, children, and men.” Echoing this statement, nine speakers spoke explicitly about the need to protect women while paying additional attention to the needs of women in conflict. As suggested by the representative of Kazakhstan, protecting civilians is not only a matter of their physical security, but is also linked to the dignity of women and children.

Thirty-five speakers (46.67%) suggested that women and children too often suffered from sexual and gender-based violence by both parties to the conflict and peacekeepers. In this vein, the representative of Senegal underlined that sexual abuse during conflict must not be tolerated. Representatives of Italy and Morocco, among others, voiced support for the zero-tolerance policy, which must be met with training tailored to reach a zero-case reality and to protect the credibility and trust of missions. As per representative of France, an acute and urgent concern must be paid to the phenomenon of sexual violence and the use of rape as a tactic of warfare against women. Peacekeepers need to be prepared to address the special needs of women. Therefore, the representative of Djibouti invited other speakers to the need for gender sensitivity training as a central part of security sector reform.

There must be concrete efforts to increase women’s engagement in that area. Eleven speakers (14.67%) recommended to involve women in all levels and processes of mediation, peacekeeping and peace maintenance, reconstruction and development. As suggested by the representative of Mexico, the work of women blue helmets is crucial to strengthen and support early-warning mechanisms and strengthen trust. Looking at the need to involve more women in peace processes, the representative of Sweden mentioned the work of the Nordic Women Mediators’ Network that helped to ensure meaningful participation by women and girls as powerful agents for civilian protection. The statement of the representative of the European Union suggests that women’s rights groups and other civil society organizations should play a role in conflict prevention.

Women have proved to make a positive impact on peacekeeping environments, both in supporting the role of women in building peace and protecting women's rights. In addition, speakers concluded that local women’s voices should be also taken into account through comprehensive collaborative strategies. However, the detailed strategies that will further guard the implementation of zero-tolerance policy remains as unclear and under-discussed as the strategies to end the proliferation of small arms and light weapons.

Report of the Secretary-General on the protection of civilians in armed conflict (S/2016/447).

Concept note for the High-level open debate on protecting civilians in the context of peacekeeping operations, June, 2016