Security Council Open Debate on the Protection of Civilians in Armed Conflict, May 2017 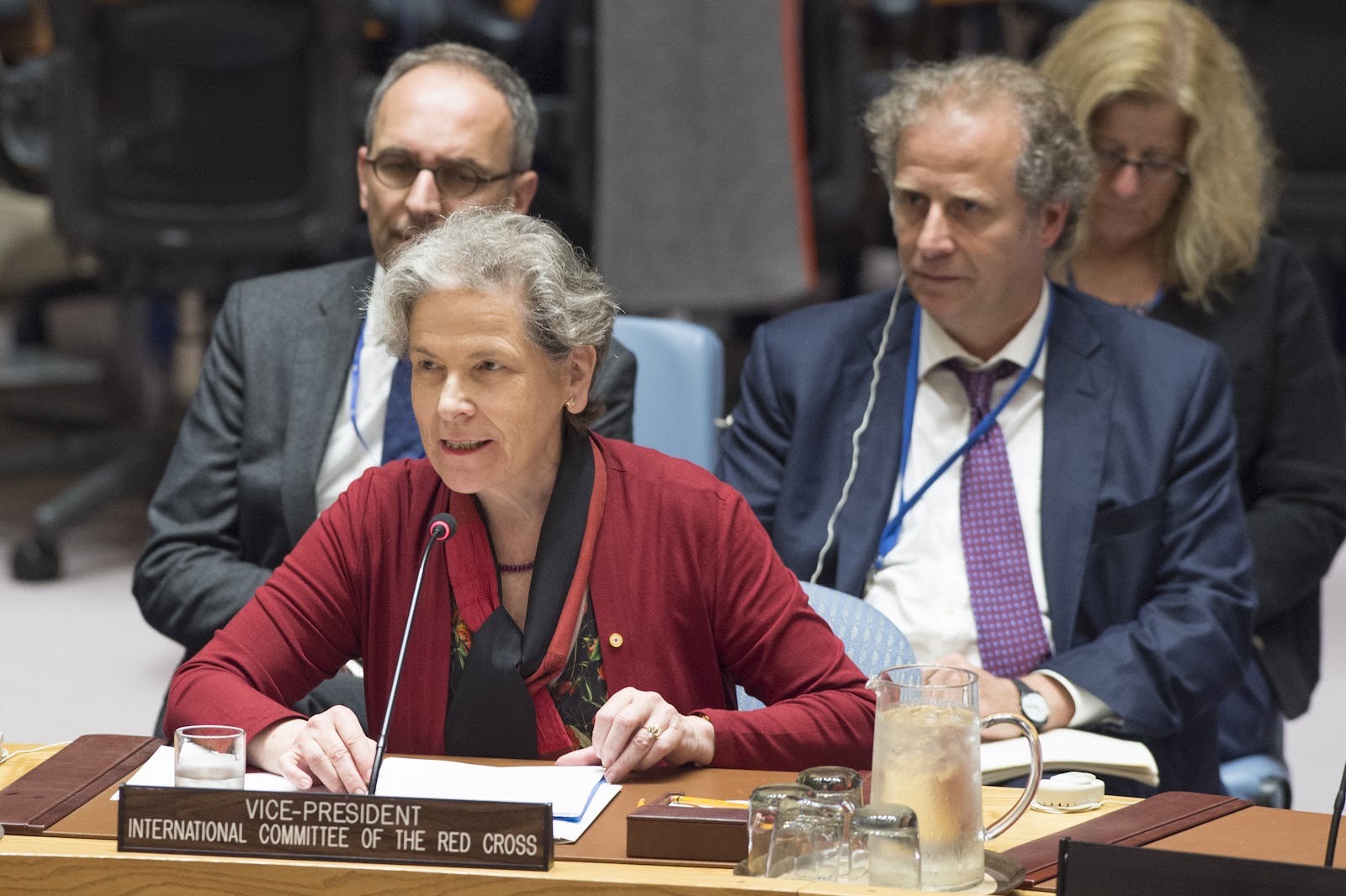 Christine Beerli, Vice-President of the International Committee of the Red Cross (ICRC), addresses the Security Council meeting on the protection of civilians and medical care in armed conflict. UN Photo/Eskinder Debebe

The Security Council Open Debate entitled, “Protection of Civilians in Armed Conflict: Health Care in Armed Conflict” was convened by the Council’s current president, Uruguay, on 25 May, 2017. The meeting was framed as an opportunity for Member States to explore the scope of threats to medical care in conflict situations, broaden the context of protection of civilians towards a more progressive agenda including health care, respect for international humanitarian law and forced displacement and assess the implementation of Resolution 2286 (2016). Speakers at the debate highlighted the devastating impact of warfare on civilians, including women, children and displaced persons, with particular concern for the urbanisation of conflict and the increased targeting of critical infrastructures such as aid routes, hospitals, schools and water supplies by conflict parties. Among the most commonly addressed issues at the debate, Member State representatives called for combatting impunity for perpetrators of attacks on non-combattants, codifying the protection of civilians in all peacekeeping mandates and fulfilling national obligations to preserve and respect international law. Encouraging trends at the meeting included significant integration of Women, Peace and Security (WPS) and disarmament themes.

The meeting was convened by Secretary-General Antonio Guterres, who dedicated his statement to the plight of the 65 million displaced persons currently fleeing conflicts around the globe, citing the destruction of civilian infrastructures as a key driver of this issue. Guterres stated that despite positive steps forward on the implementation of Resolution 2286 (2016), little impact has been made on the ground. Instead, attacks against humanitarian missions, cities, and medical facilities have increased in frequency and brutality in the year since its adoption.

Guterres was followed by civil society briefers from the International Committee of the Red Cross (ICRC) and Human Rights Watch (HRW),  who welcomed the Secretary-General’s focus on conflict prevention and condemned rampant impunity for conflict parties targeting civilian populations and humanitarian infrastructures. Christine Beerli of the ICRC stressed that humanitarian workers see first-hand the realities of the international community’s failure to protect civilian populations from violence, citing a number of cases from her experience on the ground in conflict zones. On the other hand Bruno Stagno Ugarte of HRW welcomed the recommendations made by the Secretary-General in his 2017 Report on the Protection of Civilians, but stated that the Security Council has not demonstrated adequate political will to implement these critical points. Further, Ugarte called on the Secretary-General to “immunise” his reports from politicisation by Member States.

Member State Representatives echoed many of these points, offering support for Resolution 2286 (2016) and condemning attacks against urban, civilian and humanitarian populations and infrastructures. Key themes in the discussion included strengthening the rule of law to prevent such attacks, ensuring accountability for violations, and improving protection mandates. Most notably, of the 68 speakers at the debate 27 (39 percent) referenced disarmament. The majority of references comprised general statements condemning indiscriminate bombings of health and urban centers, however a number of speakers offered substantive consideration to this issue. In particular, the representative of the Security Council’s current President, Uruguay, devoted the majority of his statement to disarmament, remarking: “The international community must realise that every gun made and warship developed, are a theft from humanity- they are not free. This world of arms is not spending money alone, it is spending the hopes of children, the sweat of labourers, and the genius of scientists.” A handful of representatives called for abolishing explosive ordnance, nuclear weapons and other WMDs, as well as expressing concern for the misallocation of national resources to military expenditure. 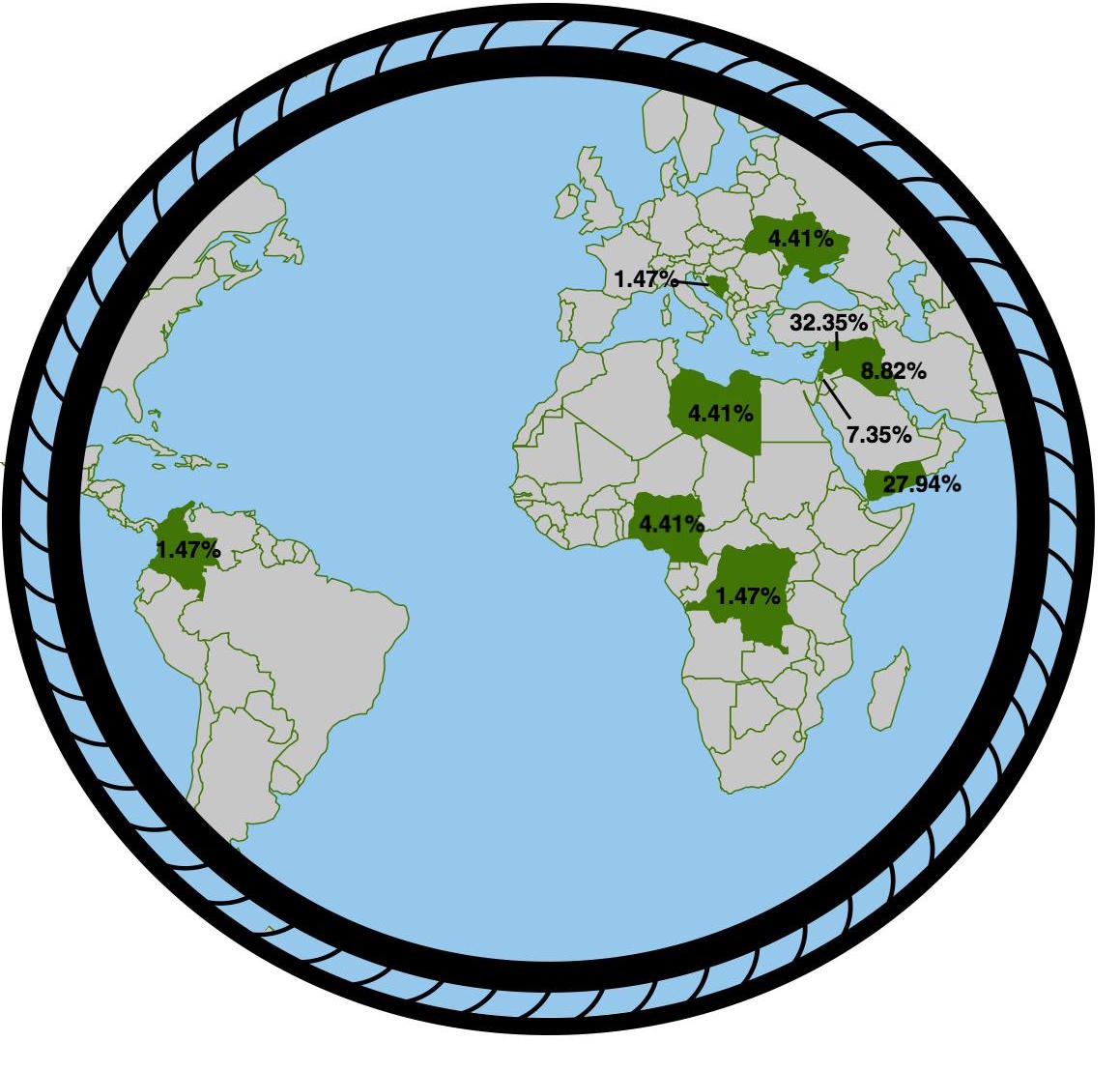 The situations in Syria (32.35 percent) and Yemen (27.94 percent) received significant attention at the debate, particularly with concern for the ‘daily’ occurrences of attacks on civilians, and frequent targeting of hospitals and schools in these crises. Notably, in the case of Syria a significant number of the relevant references welcomed the ‘International, Impartial and Independent Mechanism to Assist in the Investigation and Prosecution of Persons Responsible for the Most Serious Crimes under International Law Committed in the Syrian Arab Republic’ as a tool to fight impunity. In Yemen, the dialogue also afforded attention to the dire situation caused by conflict-induced famine and a recent cholera epidemic, with a number of speakers condemning conflict party efforts to block vital humanitarian aid routes.

Crises in Iraq (8.82 percent) and Palestine (7.35 percent) were also highlighted. References to the situation in Iraq were often in connection with the activities of the Islamic State of Iraq and the Levant (ISIL/Daesh), however the representative of Belarus was among the speakers noting concern for individuals in need of special protection in this situation, specifically translators and interpreters. On the other hand references to Palestine aligned with the broader themes of the debate, condemning attacks on humanitarian infrastructures, with particular emphasis on the destruction and restriction of Palestinian water supplies by Israeli forces.

The situations in Libya (4.41 percent), Nigeria (4.41 percent) and Ukraine (4.41 percent) received limited attention from speakers at the debate. The majority of references reflected condemnation or concern for the plight of civilians in these situations, with a particular emphasis on conflict-induced humanitarian crises in Libya and Nigeria.

Of the total 68 statements delivered, 28 (41 percent) speakers included gender-specific language in their speeches. While this number is encouraging, the broad distribution of references across the 13 WPS themes remained very low. Though the general discussion at the debate included a number of strong statements regarding issues such as conflict prevention, displacement, justice and implementation, gender perspectives were all but absent from these contexts and were instead only  incorporated as general references or as protection concerns.

While referencing women, the representatives of the United States, Argentina, Australia, Belgium, Bangladesh, the European Union and Bolivia (10.29 percent) did not award any substantive attention to the WPS agenda. Rather, these references included general statements alluding to the impact of conflict on ‘women and children’ or the need for humanitarian policies to address the needs of ‘men and women’. At the opposite end of the spectrum, speakers from the United Kingdom, the United Arab Emirates (UAE), Sweden, Norway and Kazakhstan (7.35 percent) spoke at length concerning the integral role women’s participation must play in conflict prevention, the design of humanitarian response policies, protection strategies and political and economic decision making.

The representatives of the UAE, USA, Pakistan and Colombia (5.88 percent) drew attention to women’s human rights. These discussions, largely pertaining to women’s specific health needs, were essential to the debate focus on medical care, as were the 6 references (8.82 percent) to gender in displacement and humanitarian response. Nonetheless, the disproportionate impact of conflict on women and girls necessitates far greater attention to the needs of these populations than these limited statements.

It is particularly concerning that issues of Sexual and Gender-Based Violence (SGBV) were only discussed by 6 speakers (8.82 percent) at the debate, given the protection focus of this meeting, as well as the convening of the annual debate on Sexual Violence in Conflict only last week. Conflict-related sexual violence is a phenomenon perpetrated at pandemic levels and as such should be at the forefront of any discussions pertaining to the plight of civilians in conflict. Furthermore, any discussions pertaining to the protection mandates of peacekeeping missions must address concerns related sexual exploitation and abuse by peacekeepers and mission staff, however only the representative of China drew any attention to this issue.

Finally, despite strong statements concerning general disarmament, the only speaker present to offer a gender-perspective on disarmament issues was the representative of Ireland, who highlighted the nexus between explosive weapons in civilian areas and the women and girls most often displaced by this phenomenon.

Concept Note: Security Council Open Debate on the Protection of Civilians in Conflict - May 25, 2017