On Monday, 21 January 2013 the Security Council held an open debate on UN peacekeeping with special focus on a multidimensional approach. The debate resulted in a unanimous adoption of Resolution 2086 [S/RES/2086 (2013)] – the first comprehensive resolution on peacekeeping for more than a decade.

The debate featured nearly 60 statements. Several speakers, including the Secretary-General, Ban Ki-moon, addressed the necessity of integrating a gender perspective in peacekeeping operations.

UN Operations today are carried out in more challenging environments and are more complex than ever. In order to maximize the collective impact of peacekeeping missions, the Secretary-General, Ban Ki-moon, urged the UN member states to include a diverse mix of contributors and particularly to encourage the participation of women.

Women, when included in peace processes, contribute to lasting peace and stability. Several speakers emphasized that peacekeeping would benefit from the full participation of women. Subsequently women should play a greater role, in greater numbers and a gender balance in peacekeeping missions should be one of the priorities.

At the same time, plenty of speakers urged for the increased protection of women and girls in all peacekeeping operations and especially the protection from sexual violence. Many statements additionally emphasized that there must be a zero tolerance policy for misconduct and sexual violence committed by peacekeepers.

The resolution adopted at the meeting was cosponsored by all the 15 member states and supported by all the speakers. As the UN struggles with diverse and difficult conflict and postconflict situations, the speakers agreed that a generalized approach to peacekeeping is no longer sufficient. Security Council's members endorsed, therefore, the importance of applying a multidimensional approach and strengthening multidisciplinary cooperations in all peacekeeping efforts. 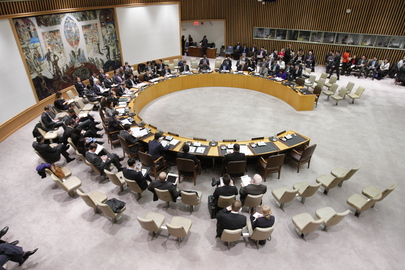 Peacekeeping and peacebuilding are closely related and several speakers argued that peacekeeping efforts should function as early peacebuilding. Nevertheless, national ownership and national responsibility was highlighted many times throughout the debate as the key to successful operations. As many speakers claimed, peacekeeping missions must respect the host country and seek to work together with national authorities and civil society organizations, since strengthened cooperation with local community is the only way to achieve sustainable peace.

Finally, the speakers emphasized their gratitude to men and women who died in the line of duty sacrificing their lives in UN peacekeeping missions. They also advocated for continuous reform, improvement and better management of peacekeeping operations within the UN.

The record of the meeting is available here. The statements will be published shortly.

Statements were also made on behalf of the European Union and the Nordic Countries.

If you have questions or concerns, don't hesitate to contact Barbara Trojanowska at barbara@peacewomen.org