On October 28 2011, the Security Council held its annual open debate on Women, Peace and Security (WPS). 64 statements were made during the open debate, including those made by the Secretary-General Ban-ki Moon ; Head of UN Women and Under-Secretary-General Michelle Bachelet; representative of ECOSOC; and Ms. Orzala Ashraf on behalf of the NGO Working Group on Women, Peace and Security (NGOWG). In addition to these speakers and the 15 Council members, 43 other member states or regional bodies made statements. 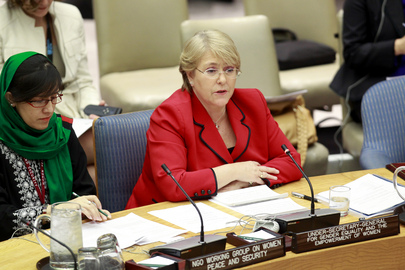 The theme of the debate was “Women's Participation and Role in Conflict Prevention and Mediation". The annual Secretary-General Report on women and peace and security (S/2011/598) provided details on implementation of SCR 1325 over the last year and for the first time included information on a set of global indicators. The Report also contained good recommendations (see part V of Report), as well as an outline of the UN Strategic Framework on WPS to guide United Nations' implementation of the resolution up to 2020 and to strengthen UN system accountability (see annex of Report). The closed negotiation of the Council resulted in the adoption of the Presidential Statement S/PRST/2011/20.

The closed negotiation of the Council resulted in the adoption of the Presidential Statement S/PRST/2011/20 (a non-binding political statement). Unfortunately, the Statement failed to add any substantial new elements and appears to represent a rather weak use of the presidential statement function, in simply calling for continued focus on increasing women's access to decision-making roles in efforts to prevent, mediate and resolve conflict without responding to many of the concrete recommendations of the Secretary-General's report (S/2011/598).

The Presidential Statement did welcome the Report of the Secretary-General in paragraph 4, however the Council Members could only agree to "take note of" the analysis and recommendation. This political disagreement was referenced by the United Kingdom in their statement, “I regret that because of the opposition of some, we were unable to unreservedly welcome the Secretary-General's report.”

The civil society speaker, Ms. Orzala Ashraf Nemat from Afghanistan, speaking on behalf of the NGO Working Group, highlighted the role women can play in achieving sustainable peace and development and presented accordingly, three urgent actions that the United Nations and Member States must take to further women's inclusion in efforts to achieve this aim. 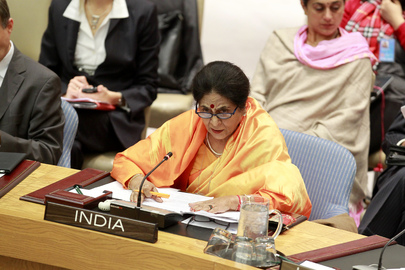 Lacking the historical significance of last year's debate for the 10th anniversary, this debate and parallel events were smaller in scale and scope. The focus of this year's debate was on consolidation and maintaining the momentum under the theme “Women's Participation and Role in Conflict Prevention and Mediation" (as per concept note for the Open Debate circulated by Nigeria, the Security Council President for October). However, rather than maintaining the momentum, most Member States statements seemed to return to more generalized language, away from the strong statements and commitments to action called for in 2010.

The majority of States, with the notable exception of Russia and China, welcomed the report of the Secretary-General. Moreover a majority made particular reference to the inclusion of indicators for better monitoring and reporting of progress on implementation. France for example highlighted the utility of indicators in both assessing results and “identifying shortcomings in women's participation in conflict prevention and resolution” and Austria suggested furthermore, that these indicators be used to not only monitor the UN strategic framework, but to track efforts at the national level. By contrast, India intimated that although they had acknowledged the current set of indicators, it was their belief that further discussion and “intergovernmental consultation” was needed on the final makeup of indicators before they could support their full adoption. The recommendations of the report of the Secretary-General were also generally acknowledged. Many countries emphasized the utility of the UN strategic framework.

The need to advance women's participation in mediation was a consistent matter addressed, with representatives mentioning the critical and essential impact that women can and do have in the resolution of peace. There were many strong reference on this important issue including Croatia stating that, “the inclusion of women and gender expertise in peacebuilding activities is essential to reconstituting political, legal, cultural and socio- economic and social structures. Gender equality brings new degrees of democratic inclusiveness to peacebuilding, faster and more durable economic growth, and human and social capital recovery”.

Similarly emphasized was the essential role that women can and must play in efforts to prevent conflict, with most speakers including the Secretary-General calling on the UN to lead by example by creating more roles for women in preventative diplomacy and peacekeeping. Most statements recognized that progress had been particularly slow in this area. Senegal noted the relationship between proliferation of small arms and prevalence of gender based violence and expressed its desire for the achievement of a “robust arms trade treaty” at the diplomatic conference to be held in 2012. Certain States did come forward with positive initiatives in the area of prevention, for example, Liberia where women are able to convene in a safe place and also to monitor the early warning signs of conflict and lead peaceful demonstrations on issues that affect their well-being.

Please click here for Peacewomen's FULL commentary on the debate.

SG Briefing to Open Debate on Women, Peace and Security

Report of the Secretary-General on WPS, Oct 2011