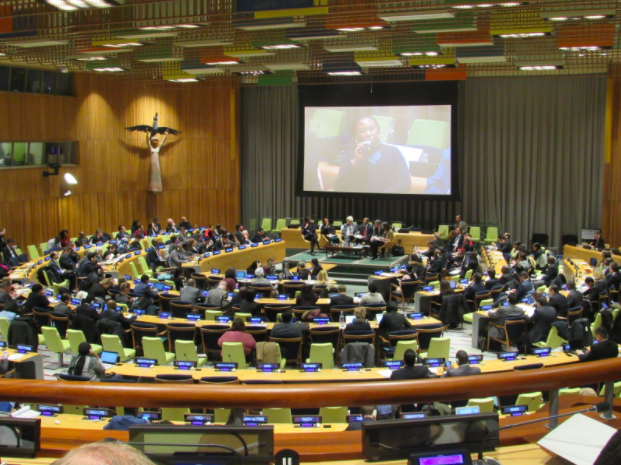 Joy Onyesoh speaks at the the High-Level Dialogue on building sustainable peace for all (Photo: Abigail Ruane/ WILPF)

In 2017, WILPF welcomed the new focus on conflict prevention and gender parity as key priorities by the new UN Secretary-General, Antonio Guterres. These priorities support WILPF’s longstanding call for strengthened conflict prevention and an integrated approach that promotes women’s human security over militarised state security. As part of our work to strengthen accountability on holistic action, WILPF engaged in advocacy and monitoring around key areas related to Women, Peace and Security across the UN system.

At the March 2017 61st session of the Commission on the Status of Women (CSW61), WILPF shared an open letter to ambassadors in New York and Geneva and worked with our grassroots network and partners to raise awareness of #MissingVoices at the CSW61. Due to these and many other civil society efforts, the final Agreed Conclusions outcome document addressed meaningful participation of women in decision-making as a key in breaking the cycle of discrimination and violence.

At the July 2017 High-Level Political Forum, WILPF’s analysis of gender, militarism and conflict issues with our coalition the Women’s Major Group, including through a coalition briefing paper, contributed to a Ministerial Declaration that affirmed the need to redouble efforts to resolve and prevent conflict by ensuring women's role in peacebuilding. However, our analysis showed that only 11% of reporting states recognised extraterritorial obligations for realising gender equality (SDG 5). It also amplified the ways in which arms transfers violate international commitments, including on health (SDG 3), education (SDG 4) and housing (SDG 11). As such, our analysis demonstrated that urgent action is needed to prevent “business as usual” and ensure the transformative potential of the SDGs.

At the September 2017 UN General Assembly (UNGA72), WILPF monitored its General Debate for the references to gender, disarmament, conflict prevention and WILPF focus countries. WILPF analysis highlighted how narrow and vague commitments by Member States on gender equality and demilitarised security pose ongoing challenges to creating feminist peace that works for women. It also highlighted how women civil society leaders in the feminist pacifist movement continue to provide vision and action needed for transformative change, as recognised by the awarding of the 2017 Nobel Prize to the International Campaign to Abolish Nuclear Weapons (ICAN), of which WILPF is a steering committee member, for realising the 2017 world’s first legally binding treaty prohibiting nuclear weapons.