The High Level Forum on the Culture of Peace 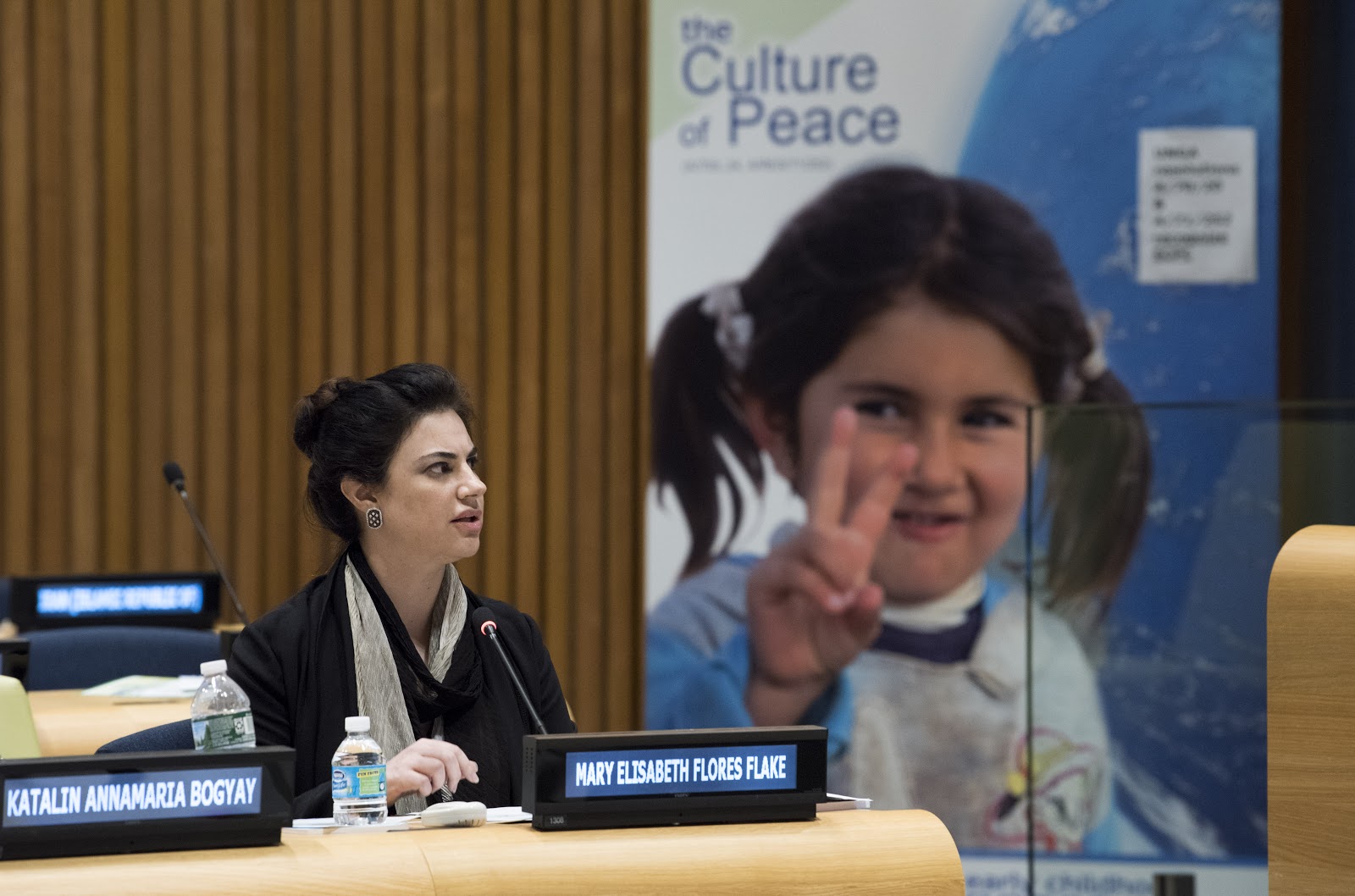 Mary Elizabeth Flores Flake, Permanent Representative of Honduras to the UN, during the High-level Forum on the Culture of Peace (Photo: UN Photo/Kim Haughton).

On 7 September 2017 the President of the United Nations General Assembly (UNGA), Peter Thomson, convened a High-Level Forum on the Culture of Peace under the theme: “Sowing the Seeds of the Culture of Peace: Early Childhood Development is the Beginning”. The Forum was an opportunity for the representatives of Member States and other stakeholders to exchange ideas on further promoting a Culture of Peace throughout the world. In the face of diverse global challenges and multifaceted threats to stability, the speakers highlighted education, doctrines of non-violence, access to justice and deepened international cooperation as critical tools to teach and spread the Culture of Peace. While the speakers recognised women as clear partners to spread ideas of tolerance and non-violence in broken societies, their statements largely failed to include any specific recommendations on strengthening women’s formal political engagement for sustainable peace.

Leaving No One Behind

Throughout the forum, a great majority of speakers clearly presented the 2030 Agenda as the most relevant and suitable framework for the promotion of a Culture of Peace. SDGs 5 and 16 were seen as key for effective integration of the Culture of Peace, in both conflict and non-conflict settings. Discussing SDG 16 (on peaceful, just and inclusive societies), the speakers called on Member States to reinforce the power of national institutions and to incite the Security Council to redirect its attention from conflict management to conflict prevention. At the same time, SDG 5 (on gender equality) was presented as a tool for mainstreaming women’s participation in the society. Indeed, in line with the 2030 Agenda, the doctrine for the Culture of Peace advocates for a people-centered approach to peace and development and aims to link targets such as gender equality and accountable institutions through deepened multi-level partnerships.

While many speakers believed that women have to spread the message of peace to their children as their family’s caregivers, others believed that a Culture of Peace must ensure that women have the space to project their influence beyond their homes and local communities. As suggested by the representative of Colombia, education programmes in peace, solidarity and cooperation exclusively developed for women will help create thriving, peaceful and inclusive societies. Similarly, India’s Beti Bachao Beti Padhao Initiative, promotes education of young women through state-financed capacity-building programmes and trainings for girls, but also sensitisation campaigns, awareness raising and community mobilisation around young women’s empowerment. When politically empowered, women bring important and different skills and perspectives to the policy-making table in comparison to their male counterparts.

The matter of stigmatising the global challenges that threaten stability such as terrorism and violent extremism was prominent during the forum. Ana Maria Menéndez, senior adviser on policy, suggested that the UN seek a new approach by prioritising conflict prevention and address the root causes of harm in all its forms. The representative of Belgium specified the need for strengthening the inclusion of women in conflict prevention and mediation at all levels to support lasting peace.  Other Member States’ representatives also highlighted the importance of education as a tool to prevent conflicts by glorifying peace rather than war. The representative of Peru identified that human beings are not born hating, and that the culture of peace needs to be placed in state policies.

Move the Money from War to Peace

Reinforcing the power of Article 26 of the UN Charter, which demands the minimising of spending on armaments, and Critical Area D of the Beijing Platform for Action, which links gender equality and the call for the control of excessive arms spending, 12% of the speakers reiterated the importance of reducing military spending and redirecting this expenditure towards sustainable peace and development. Most notably, in her opening statement, Dr. Betty Williams claimed: “Why do we have military budgets? To create weapons to destroy each other? That’s insane!”. Federico Mayor, former director of UNESCO, pointed out that more than $4 billion are spent daily on the military industry. With only 10% of this military budget, the international community could finance all the priorities of the UN, namely food, health, education and care. For example, Costa Rica, which has no armed forces since 1948, has effectively redirected spending from its military budget into social spending such as health and education for sustainable development. The money that may have been used for armed forces is used to fund public universities with affordable enrollment. Militarisation cannot be part of the international community’s efforts to build a Culture of Peace based on non-violence, moderation and peaceful coexistence.

The Culture of Peace is based on compassion and empathy between cultures and religions. Member states’ representatives highlighted the importance of partnerships to facilitate the promotion of the Culture of Peace. The representative of the Philippines  made reference to the Philippines’ partnership with Pakistan for the promotion of tolerance, understanding and universal respect on matters of freedom of religion or belief and cultural diversity. As highlighted by most speakers, these must be nurtured through education. The partnerships facilitating interfaith dialogue and Centers for Dialogues such as the Doha Center for Dialogue were noted as critical opportunities for enhancing peaceful cooperation between religions and advancing the Culture of Peace.

In view of the current prevalence of patriarchy and political economies of war, a Feminist Peace approach best resonates with the promotion of a Culture of Peace based on inclusivity, non-violence and human security. In this vein, the High-Level Forum could have benefited from an integration of a Feminist Peace framework with the following recommendations for Member States:

2. Stigmatise war and violence across the globe, including by

3. Strengthening political economies conducive to the spread of the Culture of Peace, including by

The Concept Note and Final Programme are available in PDF format below.

High Level Forum on the Culture of Peace Concept Note

High Level Forum on the Culture of Peace Final Programme