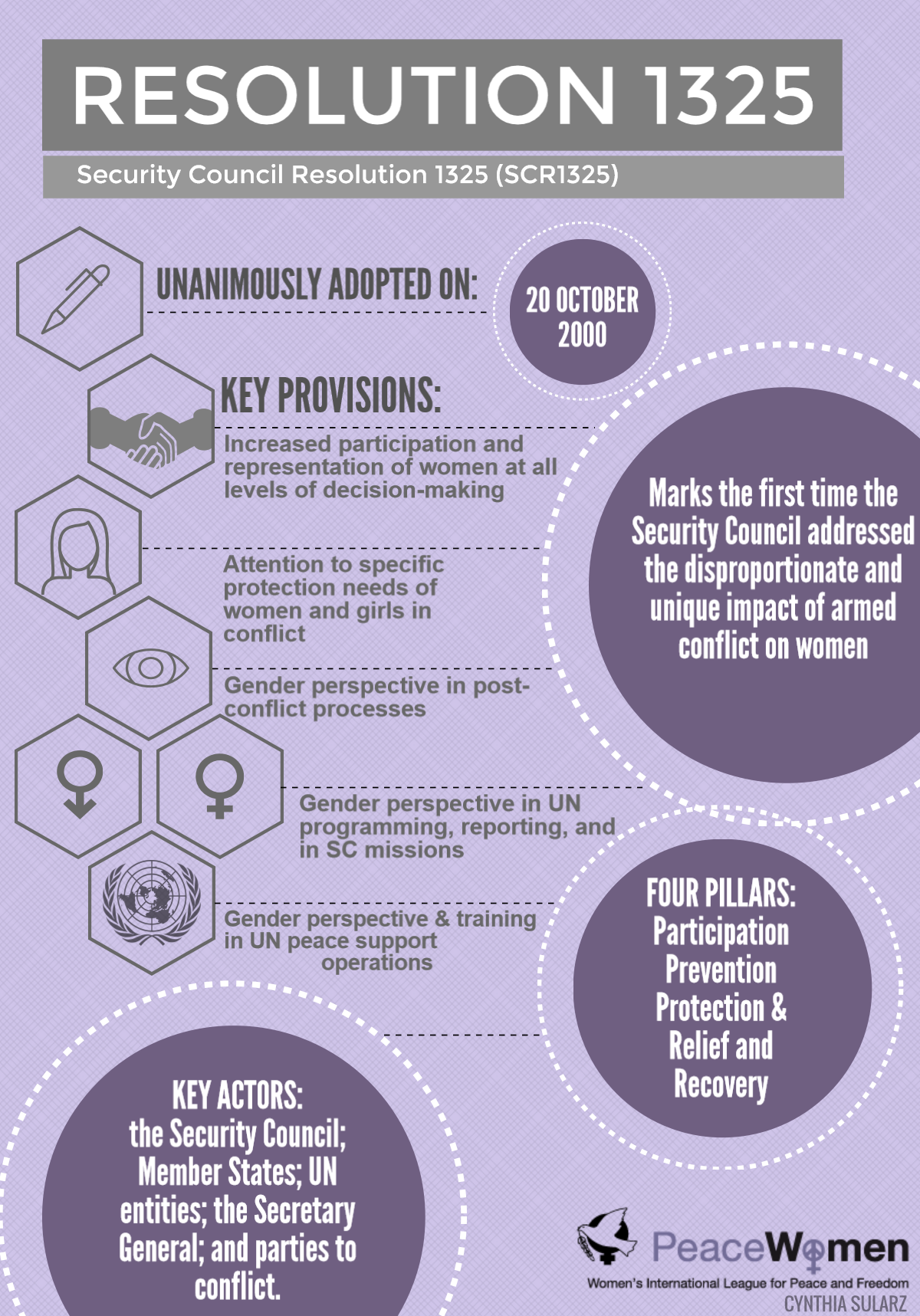 The first resolution on Women, Peace and Security, Security Council Resolution 1325 (SCR1325), was unanimously adopted by United Nations Security Council on 31 October 2000. SCR1325 marked the first time the Security Council addressed the disproportionate and unique impact of armed conflict on women; recognized the under-valued and under-utilized contributions women make to conflict prevention, peacekeeping, conflict resolution, and peace-building. It also stressed the importance of women’s equal and full participation as active agents in peace and security.

Key Actors responsible for implementation of SCR 1325 include the Security Council; Member States; UN entities; the Secretary-General; and parties to the conflict.

The Women, Peace and Security agenda is anchored in the principle that effective incorporation of gender perspectives and women’s rights can have a meaningful and positive impact on the lives of women, men, girls, and boys on the ground. Its interlinked and mutually reinforcing aspects (sometimes referred to as Pillars or the “3 Ps”) -- protection, prevention and participation -- are critical in respecting human rights and dignity and in tackling the root causes of conflict to create sustainable peace.

Security Council Resolutions 1261 and 1314 are focused on the theme of Children and Armed Conflict. Resolutions 1265 and 1296 are focused on the theme of the Protection of Civilians in Armed Conflict. Each month the Presidency of the Security Council rotates alphabetically, giving each of the fifteen members an opportunity to facilitate discussions and guide the deliberations of the Council. The country holding the Presidency has the prerogative to propose thematic debates and open sessions of the Council that invites the other UN Member States to contribute to the Security Council's deliberations on a particular topic, with the concurrence of other members. During its term on the Council, Namibia initiated the Open Debate of the Security Council on Women, Peace and Security, Canada initiated the debate on the Protection of Civilians in Armed Conflict, the Netherlands initiated the debate on Children and Armed Conflict, and Bangladesh held the Presidency when the Council issued a statement to the press marking International Women's Day in 2000. (Presidential Statement to Press, 8 March 2000: http://www.un.org/News/Press/docs/2000/20000308.sc6816.doc.html).

Recalling also the commitments of the Beijing Declaration and Platform for Action (A/52/231) as well as those contained in the outcome document of the twenty-third Special Session of the United Nations General Assembly entitled "Women 2000: Gender Equality, Development and Peace for the twenty-first century" (A/S-23/10/Rev.1), in particular those concerning women and armed conflict.

Bearing in mind the purposes and principles of the Charter of the United Nations and the primary responsibility of the Security Council under the Charter for the maintenance of international peace and security,

Expressing concern that civilians, particularly women and children, account for the vast majority of those adversely affected by armed conflict, including as refugees and internally displaced persons, and increasingly are targeted by combatants and armed elements, and recognizingthe consequent impact this has on durable peace and reconciliation,

Reaffirming also the need to implement fully international humanitarian and human rights law that protects the rights of women and girls during and after conflicts,

Emphasizing the need for all parties to ensure that mine clearance and mine awareness programmes take into account the special needs of women and girls,

Recognizing the urgent need to mainstream a gender perspective into peacekeeping operations, and in this regard notingthe Windhoek Declaration and the Namibia Plan of Action on Mainstreaming a Gender Perspective in Multidimensional Peace Support Operations (S/2000/693),

Recognizing also the importance of the recommendation contained in the statement of its President to the press of 8 March 2000 for specialized training for all peacekeeping personnel on the protection, special needs and human rights of women and children in conflict situations,

Recognizing that an understanding of the impact of armed conflict on women and girls, effective institutional arrangements to guarantee their protection and full participation in the peace process can significantly contribute to the maintenance and promotion of international peace and security,

Noting. the need to consolidate data on the impact of armed conflict on women and girls,

1.     Urges Member States to ensure increased representation of women at all decision-making levels in national, regional and international institutions and mechanisms for the prevention, management, and resolution of conflict;

2.     Encourages the Secretary-General to implement his strategic plan of action (A/49/587) calling for an increase in the participation of women at decision-making levels in conflict resolution and peace processes;

3.     Urges the Secretary-General to appoint more women as special representatives and envoys to pursue good offices on his behalf, and in this regard calls onMember States to provide candidates to the Secretary-General, for inclusion in a regularly updated centralized roster;

4.     Further urges the Secretary-General to seek to expand the role and contribution of women in United Nations field-based operations, and especially among military observers, civilian police, human rights and humanitarian personnel;

5.     Expresses its willingness to incorporate a gender perspective into peacekeeping operations, and urges the Secretary-General to ensure that, where appropriate, field operations include a gender component;

6.     Requests the Secretary-General to provide to Member States training guidelines and materials on the protection, rights and the particular needs of women, as well as on the importance of involving women in all peacekeeping and peace-building measures, invitesMember States to incorporate these elements as well as HIV/AIDS awareness training into their national training programmes for military and civilian police personnel in preparation for deployment, and further requeststhe Secretary-General to ensure that civilian personnel of peacekeeping operations receive similar training;

7.     Urges Member States to increase their voluntary financial, technical and logistical support for gender-sensitive training efforts, including those undertaken by relevant funds and programmes, inter alia, the United Nations Fund for Women and United Nations Children’s Fund, and by the Office of the United Nations High Commissioner for Refugees and other relevant bodies;

8.     Calls on all actors involved, when negotiating and implementing peace agreements, to adopt a gender perspective, including,inter alia:

(a)    The special needs of women and girls during repatriation and resettlement and for rehabilitation, reintegration and post-conflict reconstruction;

(b)    Measures that support local women’s peace initiatives and indigenous processes for conflict resolution, and that involve women in all of the implementation mechanisms of the peace agreements;

(c)    Measures that ensure the protection of and respect for human rights of women and girls, particularly as they relate to the constitution, the electoral system, the police and the judiciary;

11.    Emphasizes the responsibility of all States to put an end to impunity and to prosecute those responsible for genocide, crimes against humanity, and war crimes including those relating to sexual and other violence against women and girls, and in this regard stressesthe need to exclude these crimes, where feasible from amnesty provisions;

12.   Calls upon  all parties to armed conflict to respect the civilian and humanitarian character of refugee camps and settlements, and to take into account the particular needs of women and girls, including in their design, and recalls its resolutions 1208 (1998) of 19 November 1998 and 1296 (2000) of 19 April 2000;

13.   Encourages all those involved in the planning for disarmament, demobilization and reintegration to consider the different needs of female and male ex-combatants and to take into account the needs of their dependants;

14.   Reaffirms its readiness, whenever measures are adopted under Article 41 of the Charter of the United Nations, to give consideration to their potential impact on the civilian population, bearing in mind the special needs of women and girls, in order to consider appropriate humanitarian exemptions;

15.   Expresses its willingness to ensure that Security Council missions take into account gender considerations and the rights of women, including through consultation with local and international women’s groups;

16.   Invites the Secretary-General to carry out a study on the impact of armed conflict on women and girls, the role of women in peace-building and the gender dimensions of peace processes and conflict resolution, and further inviteshim to submit a report to the Security Council on the results of this study and to make this available to all Member States of the United Nations;

17.   Requests the Secretary-General, where appropriate, to include in his reporting to the Security Council progress on gender mainstreaming throughout peacekeeping missions and all other aspects relating to women and girls;

18.   Decides to remain actively seized of the matter.