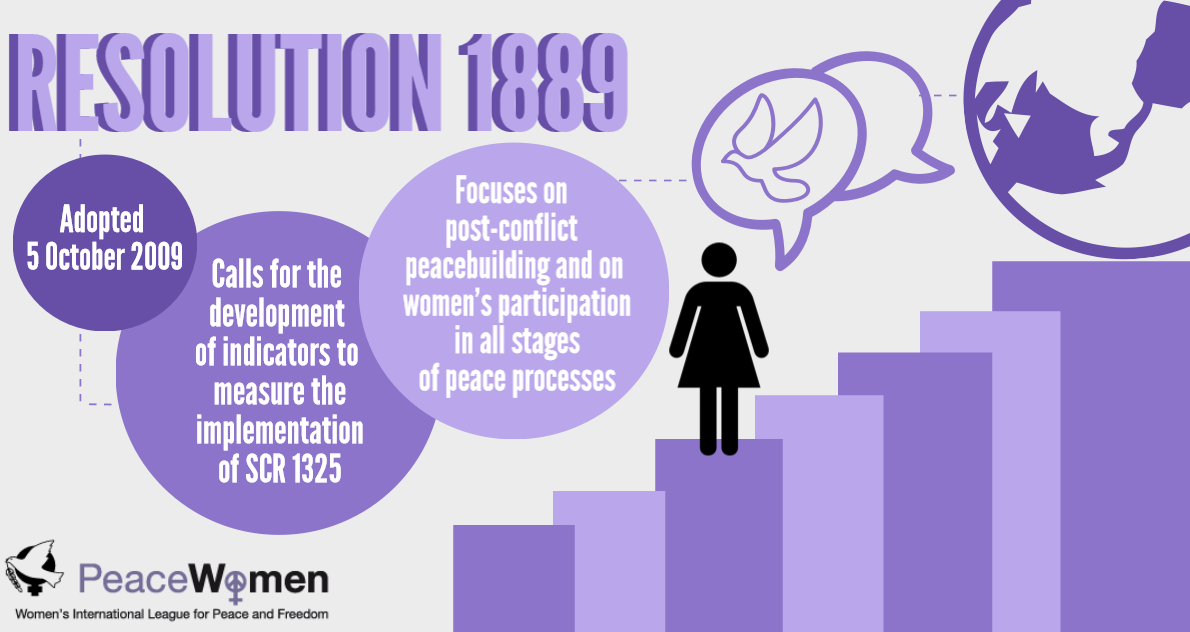 The third and fourth resolutions, SCR 1888 and SCR 1889, were adopted in 2009 to strengthen elements of the previously adopted resolutions. Specifically, SCR 1889 is focused on post-conflict peacebuilding, and in particular calls for the development of indicators to measure the implementation of SCR 1325 both within the UN system, and by Member States.

The Security Council unanimously adopted resolution 1889 (2009), the full text of which reads as follows:

Guided by the purposes and principles of the Charter of the United Nations, and bearing in mind the primary responsibility of the Security Council under the Charter for the maintenance of international peace and security,

Recalling the resolve expressed in the 2005 United Nations General Assembly World Summit Outcome Document (A/RES/60/1) to eliminate all forms of violence against women and girls, the obligations of States Parties to the Convention on the Elimination of All Forms of Discrimination Against Women and the Optional Protocol thereto, the Convention on the Rights of the Child and the Optional Protocols thereto, recalling also the commitments contained in the Beijing Declaration and Platform for Action as well as those contained in the outcome document of the twenty-third Special Session of the United Nations General Assembly entitled “Women 2000: Gender Equality, Development and Peace for the Twenty-First Century” (A/S‑23/10/Rev.1), in particular those concerning women and armed conflict,

Having considered the report of the Secretary General (S/2009/465) of 16 September 2009 and stressing that the present resolution does not seek to make any legal determination as to whether situations that are referred to in the Secretary-General’s report are or are not armed conflicts within the context of the Geneva Conventions and the Additional Protocols thereto, nor does it prejudge the legal status of the non-State parties involved in these situations,

Welcoming the efforts of Member States in implementing its resolution 1325 (2000) at the national level, including the development of national action plans, and encouraging Member States to continue to pursue such implementation,

Reiterating the need for the full, equal and effective participation of women at all stages of peace processes given their vital role in the prevention and resolution of conflict and peacebuilding, reaffirming the key role women can play in re‑establishing the fabric of recovering society and stressing the need for their involvement in the development and implementation of post-conflict strategies in order to take into account their perspectives and needs,

Expressing deep concern about the under-representation of women at all stages of peace processes, particularly the very low numbers of women in formal roles in mediation processes and stressing the need to ensure that women are appropriately appointed at decision-making levels, as high level mediators, and within the composition of the mediators’ teams,

Remaining deeply concerned about the persistent obstacles to women’s full involvement in the prevention and resolution of conflicts and participation in post-conflict public life, as a result of violence and intimidation, lack of security and lack of rule of law, cultural discrimination and stigmatization, including the rise of extremist or fanatical views on women, and socio-economic factors including the lack of access to education, and in this respect, recognizing that the marginalization of women can delay or undermine the achievement of durable peace, security and reconciliation,

Recognizing the particular needs of women and girls in post-conflict situations, including, inter alia, physical security, health services including reproductive and mental health, ways to ensure their livelihoods, land and property rights, employment, as well as their participation in decision-making and post-conflict planning, particularly at early stages of post-conflict peacebuilding,

Noting that despite progress, obstacles to strengthening women’s participation in conflict prevention, conflict resolution and peacebuilding remain, expressing concern that women’s capacity to engage in public decision making and economic recovery often does not receive adequate recognition or financing in post-conflict situations, and underlining that funding for women’s early recovery needs is vital to increase women’s empowerment, which can contribute to effective post-conflict peacebuilding,

Recognizing that an understanding of the impact of situations of armed conflict on women and girls, including as refugees and internally displaced persons, adequate and rapid response to their particular needs, and effective institutional arrangements to guarantee their protection and full participation in the peace process, particularly at early stages of post-conflict peacebuilding, can significantly contribute to the maintenance and promotion of international peace and security,

Welcoming the efforts of the Secretary-General to appoint more women to senior United Nations positions, particularly in field missions, as a tangible step towards providing United Nations leadership on implementation of its resolution 1325 (2000),

Welcoming the upcoming establishment of a United Nations Steering Committee to enhance visibility and strengthen coordination within the United Nations system regarding the preparations for the 10th anniversary of resolution 1325 (2000),

Encouraging relevant actors to organize events during 2009-2010 at the global, regional and national levels to increase awareness about resolution 1325 (2000), including ministerial events, to renew commitments to “Women and peace and security”, and to identify ways to address remaining and new challenges in implementing resolution 1325 (2000) in the future,

1.   Urges Member States, international and regional organisations to take further measures to improve women’s participation during all stages of peace processes, particularly in conflict resolution, post-conflict planning and peacebuilding, including by enhancing their engagement in political and economic decision-making at early stages of recovery processes, through inter alia promoting women’s leadership and capacity to engage in aid management and planning, supporting women’s organizations, and countering negative societal attitudes about women’s capacity to participate equally;

2.   Reiterates its call for all parties in armed conflicts to respect fully international law applicable to the rights and protection of women and girls;

3.   Strongly condemns all violations of applicable international law committed against women and girls in situations of armed conflicts and post‑conflict situations, demands all parties to conflicts to cease such acts with immediate effect, and emphasizes the responsibility of all States to put an end to impunity and to prosecute those responsible for all forms of violence committed against women and girls in armed conflicts, including rape and other sexual violence;

4.   Calls upon the Secretary-General to develop a strategy, including through appropriate training, to increase the number of women appointed to pursue good offices on his behalf, particularly as Special Representatives and Special Envoys, and to take measures to increase women’s participation in United Nations political, peacebuilding and peacekeeping missions;

5.   Requests the Secretary-General to ensure that all country reports to the Security Council provide information on the impact of situations of armed conflict on women and girls, their particular needs in post-conflict situations and obstacles to attaining those needs;

6.   Requests the Secretary-General to ensure that relevant United Nations bodies, in cooperation with Member States and civil society, collect data on, analyze and systematically assess particular needs of women and girls in post-conflict situations, including, inter alia, information on their needs for physical security and participation in decision-making and post-conflict planning, in order to improve system-wide response to those needs;

7.   Expresses its intention, when establishing and renewing the mandates of United Nations missions, to include provisions on the promotion of gender equality and the empowerment of women in post-conflict situations, and requests the Secretary-General to continue, as appropriate, to appoint gender advisors and/or women-protection advisors to United Nations missions and asks them, in cooperation with United Nations Country Teams, to render technical assistance and improved coordination efforts to address recovery needs of women and girls in post-conflict situations;

8.   Urges Member States to ensure gender mainstreaming in all post-conflict peacebuilding and recovery processes and sectors;

9.   Urges Member States, United Nations bodies, donors and civil society to ensure that women’s empowerment is taken into account during post-conflict needs assessments and planning, and factored into subsequent funding disbursements and programme activities, including through developing transparent analysis and tracking of funds allocated for addressing women’s needs in the post-conflict phase;

10.  Encourages Member States in post-conflict situations, in consultation with civil society, including women’s organizations, to specify in detail women and girls’ needs and priorities and design concrete strategies, in accordance with their legal systems, to address those needs and priorities, which cover inter alia support for greater physical security and better socio-economic conditions, through education, income generating activities, access to basic services, in particular health services, including sexual and reproductive health and reproductive rights and mental health, gender-responsive law enforcement and access to justice, as well as enhancing capacity to engage in public decision-making at all levels;

12.  Calls upon all parties to armed conflicts to respect the civilian and humanitarian character of refugee camps and settlements, and ensure the protection of all civilians inhabiting such camps, in particular women and girls, from all forms of violence, including rape and other sexual violence, and to ensure full, unimpeded and secure humanitarian access to them;

13.  Calls upon all those involved in the planning for disarmament, demobilization and reintegration to take into account particular needs of women and girls associated with armed forces and armed groups and their children, and provide for their full access to these programmes;

14.  Encourages the Peacebuilding Commission and Peacebuilding Support Office to continue to ensure systematic attention to and mobilisation of resources for advancing gender equality and women’s empowerment as an integral part of post-conflict peacebuilding, and to encourage the full participation of women in this process;

15.  Request the Secretary-General, in his agenda for action to improve the United Nations’ peacebuilding efforts, to take account of the need to improve the participation of women in political and economic decision-making from the earliest stages of the peacebuilding process;

17.  Requests the Secretary-General to submit to the Security Council within 6 months, for consideration, a set of indicators for use at the global level to track implementation of its resolution 1325 (2000), which could serve as a common basis for reporting by relevant United Nations entities, other international and regional organizations, and Member States, on the implementation of resolution 1325 (2000) in 2010 and beyond;

18.  Requests the Secretary-General, within the report requested in S/PRST/2007/40, to also include a review of progress in the implementation of its resolution 1325 (2000), an assessment of the processes by which the Security Council receives, analyses and takes action on information pertinent to resolution 1325 (2000), recommendations on further measures to improve coordination across the United Nations system, and with Member States and civil society to deliver implementation, and data on women’s participation in United Nations missions;

19.  Requests the Secretary-General to submit a report to the Security Council within 12 months on addressing women’s participation and inclusion in peacebuilding and planning in the aftermath of conflict, taking into consideration the views of the Peacebuilding Commission and to include, inter alia:

a.    Analysis on the particular needs of women and girls in post-conflict situations,

b.    Challenges to women’s participation in conflict resolution and peacebuilding and gender mainstreaming in all early post-conflict planning, financing and recovery processes,

c.    Measures to support national capacity in planning for and financing responses to the needs of women and girls in post-conflict situations,

d.    Recommendations for improving international and national responses to the needs of women and girls in post-conflict situations, including the development of effective financial and institutional arrangements to guarantee women’s full and equal participation in the peacebuilding process,

20.  Decides to remain actively seized of the matter.”