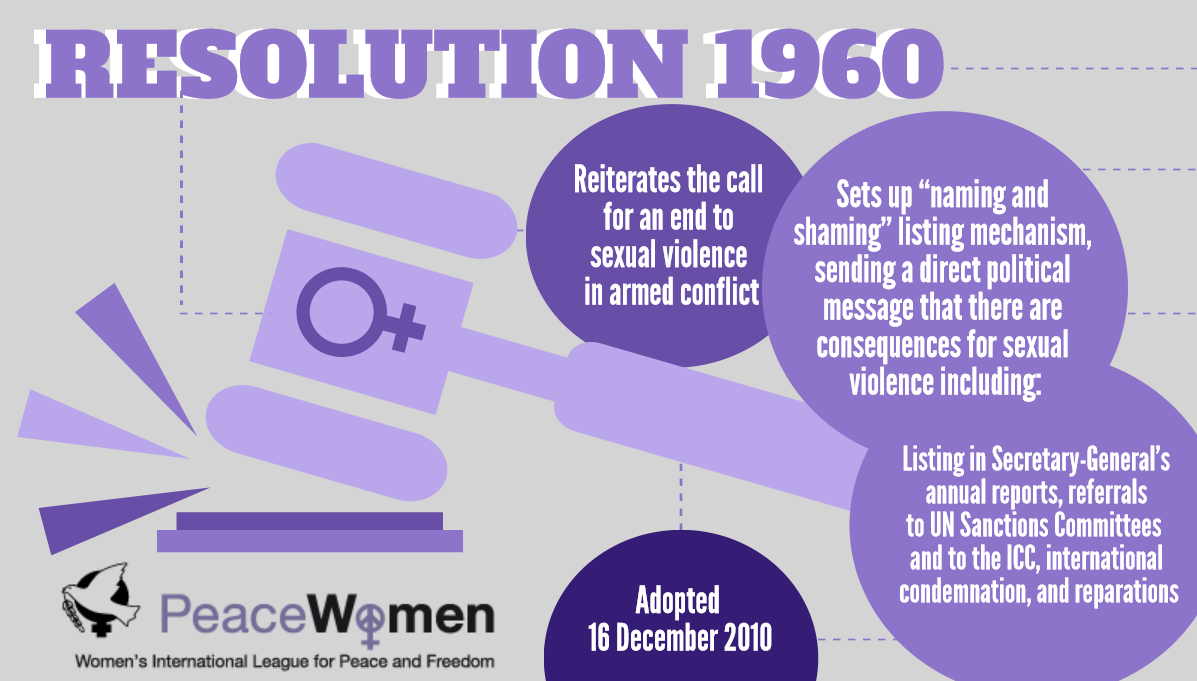 In December 2010, noting that sexual violence during armed conflict remains systematic, rampant, and widespread, the Security Council unanimously adopted a new resolution, Resolution 1960 (2010). This resolution creates institutional tools and teeth to combat impunity and outlines specific steps needed for both the prevention of and protection from sexual violence in conflict. The new “naming and shaming,” listing mechanism mandated in the Resolution is a step forward in bringing justice for victims and a recognition that sexual violence is a serious violation of human rights and international law. However, for now, listing is only limited to situations on the Security Council’s agenda. The Resolution was negotiated under the US Presidency (as were both SCR 1820 & 1888), and it covers the main recommendations in the Secretary-General’s report (S/2010/604). The Report is a robust document and provides concrete examples and policy recommendations (attached above).

The Council adopted unanimously resolution 1960 (2010), the full text of which reads as follows:

Reiterating the necessity for all States and non-State parties to conflicts to comply fully with their obligations under applicable international law, including the prohibition on all forms of sexual violence,

Reiterating the need for civilian and military leaders, consistent with the principle of command responsibility, to demonstrate commitment and political will to prevent sexual violence and to combat impunity and enforce accountability, and that inaction can send a message that the incidence of sexual violence in conflicts is tolerated,

Recalling the responsibilities of States to end impunity and to prosecute those responsible for genocide, crimes against humanity, war crimes, and other egregious crimes perpetrated against civilians and, in this regard, noting with concern that only limited numbers of perpetrators of sexual violence have been brought to justice, while recognizing that in conflict and in post-conflict situations national justice systems may be significantly weakened,

Welcoming the progress made in rendering operational the team of experts to assist national authorities to strengthen the rule of law in accordance with resolution 1888 (2009); reaffirming the importance of deploying it rapidly to situations of particular concern with respect to sexual violence in armed conflict, working through the United Nations presence on the ground and with the consent of the host Government and in this regard, appreciating the voluntary contributions to support its work,

Recognizing that States bear the primary responsibility to respect and ensure the human rights of all persons within their territory and subject to their jurisdiction as provided for by international law,

Reaffirming that parties to armed conflict bear the primary responsibility to take all feasible steps to ensure the protection of civilians,

Recalling that international humanitarian law affords general protection to women and children as part of the civilian population during armed conflicts and special protection due to the fact that they can be placed particularly at risk,

Reaffirming that ending impunity is essential if a society in conflict or recovering from conflict is to come to terms with past abuses committed against civilians affected by armed conflict and to prevent future such abuses, drawing attention to the full range of justice and reconciliation mechanisms to be considered, including national, international and ‘mixed’ criminal courts and tribunals and truth and reconciliation commissions, and noting that such mechanisms can promote not only individual responsibility for serious crimes, but also peace, truth, reconciliation and the rights of the victims,

Recalling the inclusion of a range of sexual violence offences in the Rome Statute of the International Criminal Court and the statutes of the ad hoc international criminal tribunals,

Reaffirming the importance for States, with the support of the international community, to increase access to health care, psychosocial support, legal assistance, and socio-economic reintegration services for victims of sexual violence, in particular in rural areas, and taking into account the specific needs of persons with disabilities,

Welcoming the proposals, conclusions and recommendations included in the report of the Special Committee on Peacekeeping Operations (A/64/19) on the need for adequate capabilities and clear and appropriate guidelines to enable peacekeeping missions to carry out all their mandated tasks, including prevention of and response to sexual violence; stressing the importance of ensuring engagement by senior mission leadership on protection of civilians, including the prevention of and response to instances of sexual violence in armed conflict, with a view to ensuring that all mission components and all levels of the chain of command are properly informed of and involved in the mission’s mandate and their relevant responsibilities; welcoming progress made by the Secretary-General in developing operational tools for the implementation of protection of civilians mandates; and encouraging troop- and police-contributing countries to make full use of and provide feedback on these important materials,

Recognizing the efforts of the Secretary-General to address the underrepresentation of women in formal peace processes, the lack of mediators and ceasefire monitors with proper training in dealing with sexual violence, and the lack of women as Chief or Lead peace mediators in United Nations-sponsored peace talks; and encouraging further such efforts,

Welcoming the inclusion of women in peacekeeping missions in civil, military and police functions, recognizing that their presence may encourage women from local communities to report acts of sexual violence,

Having considered the report of the Secretary-General of 24 November 2010 (S/2010/604) and stressing that the present resolution does not seek to make any legal determination as to whether situations that are referred to in the Secretary-General’s report are or are not armed conflicts within the context of the Geneva Conventions and the Additional Protocols thereto, nor does it prejudge the legal status of non-State parties involved in these situations,

1. Reaffirms that sexual violence, when used or commissioned as a tactic of war or as a part of a widespread or systematic attack against civilian populations, can significantly exacerbate and prolong situations of armed conflict and may impede the restoration of international peace and security; affirms in this regard that effective steps to prevent and respond to such acts of sexual violence can significantly contribute to the maintenance of international peace and security; and expresses its readiness, when considering situations on the agenda of the Council, to take, where necessary, appropriate steps to address widespread or systematic sexual violence in situations of armed conflict;

2. Reiterates its demand for the complete cessation with immediate effect by all parties to armed conflict of all acts of sexual violence;

4. Requests the Secretary-General, in accordance with the present resolution and taking into account its specificity, to apply the listing and de-listing criteria for parties listed in his annual report on sexual violence in armed conflict consistent with paragraphs 175, 176, 178, and 180 of his report A/64/742-S/2010/181;

5. Calls upon parties to armed conflict to make and implement specific and time-bound commitments to combat sexual violence, which should include, inter alia, issuance of clear orders through chains of command prohibiting sexual violence and the prohibition of sexual violence in Codes of Conduct, military field manuals, or equivalent; and further calls upon those parties to make and implement specific commitments on timely investigation of alleged abuses in order to hold perpetrators accountable;

6. Requests the Secretary-General to track and monitor implementation of these commitments by parties to armed conflict on the Security Council’s agenda that engage in patterns of rape and other sexual violence, and regularly update the Council in relevant reports and briefings;

7. Reiterates its intention, when adopting or renewing targeted sanctions in situations of armed conflict, to consider including, where appropriate, designation criteria pertaining to acts of rape and other forms of sexual violence; and calls upon all peacekeeping and other relevant United Nations missions and United Nations entities, in particular the Working Group on Children and Armed Conflict, the Special Representative of the Secretary General for Children and Armed Conflict, and the Special Representative of the Secretary-General on Sexual Violence in Conflict, to share with relevant United Nations Security Council Sanctions Committees, including through relevant United Nations Security Council Sanction Committees’ monitoring groups and groups of experts, all pertinent information about sexual violence;

8. Requests the Secretary-General to establish monitoring, analysis and reporting arrangements on conflict-related sexual violence, including rape in situations of armed conflict and post-conflict and other situations relevant to the implementation of resolution 1888 (2009), as appropriate, and taking into account the specificity of each country, that ensure a coherent and coordinated approach at the field-level, and encourages the Secretary-General to engage with United Nations actors, national institutions, civil society organizations, health-care service providers, and women’s groups to enhance data collection and analysis of incidents, trends, and patterns of rape and other forms of sexual violence to assist the Council’s consideration of appropriate actions, including targeted and graduated measures, while respecting fully the integrity and specificity of the monitoring and reporting mechanism implemented under Security Council resolutions 1612 (2005) and 1882 (2009) on children and armed conflict;

10. Welcomes the work of gender advisers; looks forward to the appointment of more women protection advisers to peacekeeping missions, in accordance with resolution 1888 (2009); notes their potential contribution in the framework of the monitoring, analysis, and reporting arrangements to be established pursuant to operative paragraph 8 of the present resolution;

11. Welcomes the elaboration by the Secretary-General of scenario-based training materials on combating sexual violence for peacekeepers and encourages Member States to use them as a reference for the preparation and deployment of United Nations peacekeeping operations;

12. Underlines that, in order to carry out their mandate, missions must communicate effectively with local communities; and encourages the Secretary-General to improve their capacity to do so;

13. Expresses its intention to give due consideration to sexual violence in mandate authorizations and renewals and to request the Secretary-General to include, as appropriate, gender expertise in technical assessment missions;

14. Encourages the entities comprising United Nations Action against Sexual Violence in Conflict, as well as other relevant parts of the United Nations system, to continue to support the work of the aforementioned Special Representative of the Secretary-General on Sexual Violence in Conflict and to enhance cooperation and information-sharing among all relevant stakeholders in order to reinforce coordination and avoid overlap at the headquarters and country levels and improve system-wide response;

16. Requests the Secretary-General to continue and strengthen efforts to implement the policy of zero tolerance on sexual exploitation and abuse by United Nations peacekeeping and humanitarian personnel, and further requests the Secretary-General to continue to provide and deploy guidance on addressing sexual violence for predeployment and inductive training of military and police personnel, and to assist missions in developing situation-specific procedures to address sexual violence at the field level and to ensure that technical support is provided to troop- and police-contributing countries in order to include guidance for military and police personnel on addressing sexual violence in predeployment and induction training;

17. Invites the Special Representative on Sexual Violence in Conflict to continue to provide briefings on sexual violence, in accordance with resolution 1888 (2009);

(a) a detailed coordination and strategy plan on the timely and ethical collection of information;

(b) information on progress made in the implementation of the monitoring, analysis, and reporting arrangements mentioned in paragraph 8;

(d) updates on efforts by United Nations Mission focal points on sexual violence to work closely with Resident Coordinator/Humanitarian Coordinator (RC/HC), the United Nations Country Team, and, where appropriate, the Special Representative of the Secretary-General for Children and Armed Conflict and the Special Representative of the Secretary-General on Sexual Violence in Conflict and/or the Team of Experts, to address sexual violence;

19. Decides to remain actively seized of the matter.”