In the last two weeks, WILPF activists from Afghanistan, Democratic Republic of the Congo (DRC), Japan, Lebanon, Nigeria, Syria, and elsewhere joined more than 4,000 women peace activists and human rights defenders at the United Nations (UN) Headquarters in New York for the sixty-second session of the Commission on the Status of Women (CSW62).

Activists came to strategise and mobilise action around the priority theme of challenges and opportunities in achieving gender equality and the empowerment of rural women and girls, including in conflict.

Now, that the CSW62 is over, it is time to assess the progress made, as well as identify challenges and key gaps moving forward. 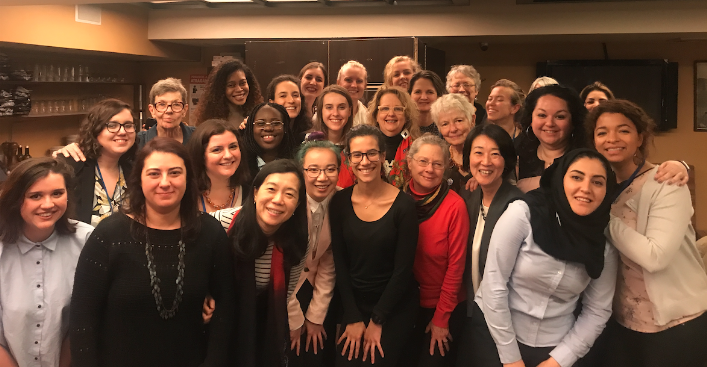 WILPF Action at the CSW62

Before and during the Session, WILPF brought attention to the need to strengthen action for rural women and girls across the conflict spectrum. We called for the recognition of rural women and girl’s leadership, the need for stricter arms regulations, and accountability for the implementation of commitments on women’s rights and Women, Peace and Security.

Prior to the CSW62, WILPF delivered a statement on rural women in Nigeria facing militant violence around the Fulani herdsmen issue at the 25 January 2018 CSW62 Multi-Stakeholder meeting. This emphasised the importance of listening to the experience of local rural women and supporting their work in building prevention and response mechanisms capable of ensuring their safety and security.

During the Session, WILPF amplified the experiences and work of our partners and sections. Our partners brought attention to the impact of Israeli Occupation on women’s security and rights in Palestine, the situation of women under siege in Syria, the impact militants have on rural women in Nigeria around the Fulani herdsman issue, and historical challenges to inclusivity within social justice movement in the US. They shed light on women’s leadership for change. This included showing how women human rights defenders (WHRDs) and women peace activists are breaking the silence in male-dominated media platforms in Egypt and sharing calls to turn the Korean armistice agreement into a peace agreement through an inclusive peace process with women at the table.

WILPF supported feminist leadership development by providing youth training in advocacy for intersectional movement building with the WILPF US Student Practicum. We also engaged in workshops, events, trainings and strategic dialogues with activists and partners to mobilise support for the meaningful participation of women in conflict situations.

WILPF mobilised with coalitions, including the Women’s Rights Caucus and Women’s Major Group, to bring attention to shrinking civil society space and attacks on WHRDs and peace activists. In solidarity with our Syrian sisters, we protested Syrian atrocities in eastern Ghouta. In solidarity with sisters around the world, we raised the issue of partners who were denied visas and whose voices were therefore excluded and missing. 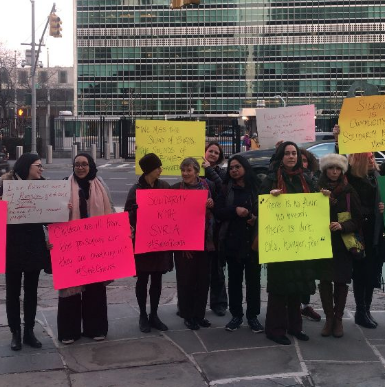 A protest in support of Syrian women under siege in eastern Ghouta (Photo: WILPF)

Where are We Now on Rural Women? Key #CSW62 Issues

CSW62 discussions did address the situation of rural women and girls in conflict. The CSW62 also brought up key related issues, including around participation, gender norms, corporate power, feminist finance, and WHRDs.

Rural women in conflict situations face particular obstacles to realising their rights. For example, in Colombia, despite the adoption of a peace agreement with important gender elements, women continue to face violence due to the proliferation of arms and inadequate peace agreement implementation, especially in rural areas. At the CSW62, the United Nations Development Programme (UNDP), with the support of Norway, committed to launch a program that will support parliamentarians to reflect on WPS implementation. Civil society also continues to hold governments accountable. In Moldova, women’s groups helped draft a National Action Plan (NAP), representing a good example for civil society involvement.

Strengthening women’s meaningful participation is a first step in deepening analysis and advancing sustainable peace. This was raised in many thematic discussions at the CSW62, including around issues of peace and security, terrorism prevention and response, economy, society, community and other areas. It also drove several initiatives, including the Elsie Initiative on Women in Peace Operations, Women’s Cohesion Space in Cameroon, African Women Leaders Initiative, feminist foreign policies in Canada and Sweden, and gender-budgeting in Uganda, Mexico and Costa Rica.

Patriarchy in rural areas was identified one of the key challenges to justice and peace. At the CSW62, participants explored how cultures of machismo supported by the media normalise discrimination and violence. The lack of support from the state for women’s rights can also increase risks. In Mali and South Sudan, one participant suggested that “the conflict is taking place over the bodies of adolescents girls”. Initiatives like the Spotlight Initiative on Eliminating Violence against Women, as well as engaging men and boys to support local women’s leadership, can therefore support transforming gender power towards equal partnerships and non-violence.

At the CSW62, participants also addressed corporate power, including around corporate human rights abuses, which often drive conflict. An indigenous Guatemalan participant spoke about the lack of consent often associated with a takeover of land and resources from local communities. Similar experiences, including in El Salvador, Brazil, the DRC, and elsewhere, demonstrated challenges to women’s rights to land, their security and human rights. Activists called for governments to prevent the current shift that is moving the social contract to be between state and corporations, and keep it between citizen and state, where women, not just corporations and international financial institutions, have a say.

Civil society and WHRDs were recognised at the CSW62 as independent and visionary leaders for peace. Examples abound. In the Koreas, women are leading a 2020 peace treaty campaign and a second DMZ-crossing on 24th of May. In Syria, women are leading programs for Syrian women to lead politically in rebuilding Syria. At the same time, WHRDs are increasingly under attack. In Brazil, a WHRD and politician, Mariella Franco, was killed in an assassination. In Egypt, WHRDs and peace activists are targeted for their activism through the application of Law on “NGO Foreign Funding”. To avoid hollow words, the international community must not only recognise WHRDs in their words, but take concrete action to protect, fund and support the rights of WHRDs and prevent shrinking spaces and attacks so they can continue their important work.

We all now know that investing in women’s organisations and gender equality is an investment in peace. At the CSW62, the UN Secretary-General introduced financing for gender equality as one of his priorities. However, discussions showed that appropriate funding remains a challenge. International donors are increasingly averse to funding small organisations that do not have proposal-writing training or the ability to produce financial reports, such as in the DRC. In Nigeria, international donors gathered $22 million in funds to improve the security of girls at school, but this money did not translate effectively. Adding money on gender equality to existing pots of cash is not enough. CSW62 participants affirmed that there is more wealth in the world than ever before. Peace does not require more money — it requires a fair (re)distribution of resources we already have. It requires engaging in democratic budgeting that spends money in a way that works for everybody.

Between 1975 and 1995, there were four World Conferences on Women, which pushed the agenda forward on women’s human rights. Since the Fourth World Conference in Beijing in 1995, there has been continued debate over when to hold a Fifth World conference. On one hand, there is clear need for increased action to realise women’s human rights. On the other hand, existing commitments are still not yet realised, and concerns have been raised that a new conference might actually reopen and move backward existing normative frameworks.

At the CSW62, Member States decided that at the 25th Anniversary of Beijing in 2020, there would be a review meeting on Beijing+25 in the form of a one-day high-level meeting of the General Assembly, on the margins of the general debate. WILPF joins activists in calling for this to focus on accountability, rather than agenda-setting, and to ensure women’s meaningful participation in the process. Twenty-three years after Beijing, we have a strong normative framework on women’s human rights. What we need is action. 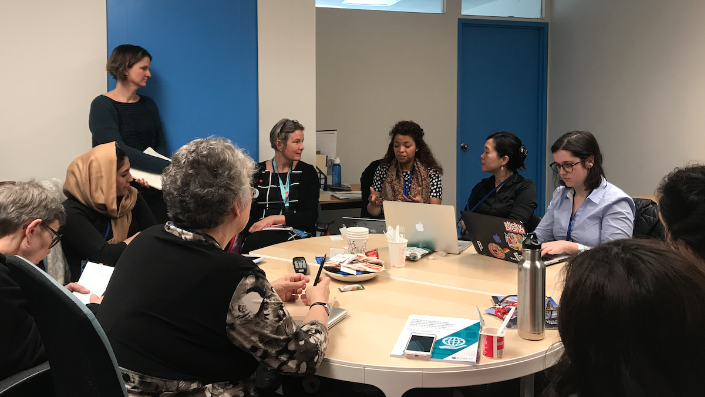 WILPF CSW62 Debrief with some of the members of the UN Practicum and WILPF US Local to Global Programme (Photo: WILPF)

At the end of CSW62, governments came to consensus on Agreed Conclusions, the first agreed language on the situation of rural women in CSW’s 62-year-long history. The CSW62 Agreed Conclusions recognised that “violence against all women and girls… is rooted in historical and structural inequality and unequal power relations between men and women”. It strongly addressed structural barriers to the empowerment of rural women, including the lack of access to land rights, economic resources and justice, and welcomed the action by “feminist groups” as well as “women’s and community-based organisations” and WHRDs.

WILPF advocated through coalitions to strengthen language on women’s meaningful participation, disarmament and accountability in the text. This resulted in the successful inclusion of references to the impact of conflict on rural women and the affirmation of “the importance of their meaningful participation, including by increasing their role in peace processes” and “the important engagement by men and boys as partners in promoting this participation”. It also supported a direct recognition of the link between gender equality and sustainable development. Unfortunately, however, gaps remained on UNSCR 1325 and disarmament.

To address the situation of rural women worldwide moving forward, it is critical for the international community to:

Read about the WILPF US experience here>>