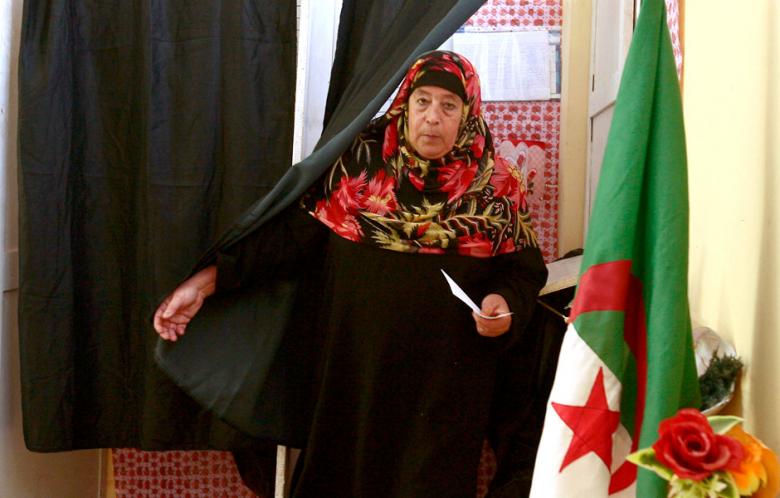 A woman exits a polling booth after casting her vote at a polling station in Algiers. (Photo: REUTERS - Zohra Bensemra)

In a first in Algerian politics, an all-women list of candidates has been formed to run in the country's forthcoming general elections. The slate was put together by a group of women from Tiaret, and will be competing for the state's seats in the national parliament at the vote in May, which is being contested by dozens of rival lists.

The slate is headed by Abbasiya Bin-Mouhoub, 55, a women's rights activist who holds a doctorate in strategic management and spent many years living abroad before returning to settle in Algeria recently. The electoral list is her first initiative since her homecoming, and was announced on International Women's Day in a bid to highlight the extent of male domination of Algerian politics.

The list includes women from diverse walks of life, including teachers, engineers, doctors, administrators and magistrates, as well as a number of social and trade union activists.

“Algerian women have a strong presence in all professions and contribute greatly to economic and social life, and it is now time for this presence to be translated into the political arena too,” Bin-Mouhoub said at the campaign's official launch.

She described the fielding of a women-only electoral slate as an “experiment” which was worth attempting regardless whether it proved to be a success or failure in electoral terms.

“In elections in our country, there have been thousands of all-male lists which include no women candidates. Society and the political class thought that was something normal and hardly worth noting,” she said. “So with our list we want to break through this male domination that has become the prevalent political norm,” she said, adding that she hoped similar lists would be formed in future.

There are few women in the various electoral states competing in May's elections. Many are ranked low on their respective candidate lists, so stand little chance of actually getting elected.

Only 30 of the current parliament's 389 members are women, a proportion of just seven percent. Of these, eleven belong to the left-wing Workers Party, the only Algerian political party led by a woman – the veteran activist Louisa Hanoune. Her resolute opposition to the regime in the 1990s earned her the epithet “the only man in the Algerian opposition” from Sheikh Ali Belhadj, deputy leader of the then-banned Islamic Salvation Front (FIS).

The announcement of the all-women list has yet to prompt any political reaction. But the wide publicity it gained is likely to encourage similar initiatives, and could develop into a phenomenon in a country that remains unwilling to elevate the position of women in politics.

Algeria also discriminates legally against women more than any other Maghreb country, especially in terms of family law. This is based on a rigid interpretation of Islamic law, and campaigners say it is unfair to women in matters like marriage, divorce and custody of children. The law's restrictions on women's travel is, however, universally ignored.