Expressing grave concern about the ongoing violence that has impacted Bahrain with forty-four casualties, the BCHR – Bahrain Center for Human Rights is asking for a stop measure in the use of excessive force on Bahraini citizens and activists, especially the excessive use of tear gas as a hazardous chemical.

“We really believe it is important for Bahrain to engage immediately and boldly in [a] strong national protection system, which is not in place yet,” said Mr. Bacre Ndiaye, Director of the Human Rights Council and Special Procedures Division at the United Nations Office in Geneva. Ndiaye following travels to Bahrain December 13-17, 2011 with a recent team UN human rights assessment visit.

The official UN team visit was enabled through cooperation and communications with the Office of King Hamad. “One of the big problems of [with] Bahrain is impunity, especially members of security forces. As long as this impunity, and a strong independent judiciary, were not in place it would be very difficult to lead a comprehensive national reconciliation process. This is also a big issue in Bahrain,” added Ndiaye.

“Although Governments are under an obligation to initiate inquiries into allegations as soon as they are brought to their attention, in some countries impartial investigations are rarely conducted.
In other cases, public inquiries are compromised, with light sentences imposed on perpetrators despite the gravity of the crimes committed. In particular, trials of members of the security forces before military courts are sometimes undermined by an ill-conceived esprit de corps.
There are also instances where low-ranking officials are convicted of human rights violations or crimes, while those in positions of command escape responsibility,” says a formal statement by the UN. “Often victims — and sometimes witnesses who assist in investigative efforts — are subjected to intimidation and death threats,” continues the statement. “For this reason, the United Nations has intensified efforts to bring the perpetrators of such crimes to justice and break the cycle of impunity.”

Linking the levels of stress with civil unrest and the excessive use of tear gas causing adverse affects on women, the BCHR – Bahrain Center for Human Rights, based in Manama, has received numerous reports of miscarriages and incomplete pregnancies in regions that have been impacted by violence.

Some reports have directly linked miscarriage to the exposure of pregnant women to tear gas used by Bahrain's police security forces. Twenty-one cases of miscarriage, or spontaneous abortion causing incomplete pregnancies, have been reported to the BCHR over an eight month period from March to November 2011.

The chemical known as ortho-2-chlorophenyl-methylene propanedinitrile (CS), currently administered by Bahrain's security forces, is a powerful and damaging agent that is used as an active ingredient in tear gas canisters. CS is one of the chemical agents known by experts as a ‘choking agent.' It is part of the ‘Chemical Warfare Agents' used by numerous police and security forces around the world, in Egypt as well as in Bahrain.

“Victims typically inhale these agents, which cause the alveoli to secrete a constant flow of fluid into the lungs, essentially drowning the victim,” says the OPCW – Organisation for the Prohibition of Chemical Weapons, which reports to the United Nations General Assembly as well as the ICC – International Criminal Court of Justice at The Hague.

CS as a chemical agent has been widely used in areas where protesters have congregated throughout Bahrain. It has also been used in neighborhoods and regions where the government thinks protesters live. But the target for the chemical has not all been protesters. Bahraini Shia Muslim citizens who have not been involved in protesting on the streets have also been severely impacted. At times the impact has been deadly. Although the Office of the Ministry of Interior in Bahrain has denied any connection between police activity and the death of forty-seven-year-old Ms. Zainab Hasan Ahmed al-Jumaa, the director of the BCHR, Mr. Nabeel Rajab, announced last July (2011) that Zainab's death occurred following a tear gas dispersal near her home.

According to WHO – the World Health Organization chemicals used in the production of tear gas have a dangerous list of side affects. CS does have a lethal dose which can be reached through repeated prolonged, high levels of exposure or containment of the fumes or gas in rooms or buildings. It is also especially dangerous for those who have pre-existing or compromised health conditions.

Zahraa, who lives in the north-central town of Ma'ameer, is the mother of one son. Ma'ameer is a region that has been especially impacted by civil unrest in Bahrain. Conditions in Ma'ameer, and for many of its Shia citizens, include exposures to toxic gases over an extended period of time as protests in areas has continued.

Numerous tear gas events have occurred on a daily basis. On November 4, 2011 Zahraa miscarried while pregnant with her second child. It was assessed that the death of her unborn child may have occurred in October during weeks of country wide protests before and up to the upcoming Bahraini national elections. During the time the use of tear gas by security forces intensified.

Zahraa was not the only woman who miscarried during those stressful days on the October election protests. Her sister-in-law who lives in Zahraa's same building and her sister-in-law's sister who lives close-by, as well as Zahraa's aunt, have also suffered from miscarriages.

“67% of the [miscarriage] cases were due to excessive use [by police security] of toxic gases, tear gas and other forms, whether as a means of suppressing a protest or attacking a whole area,” outlines the BCHR.

As tear gas canisters are ignited a lethal combination of heat and chemicals can form a deadly mix of highly toxic nitrous oxide and hydrogen cyanide. The combination can cause fatal reflex apnea – the cessation of breathing that causes death due to a shortage of oxygen in the blood. 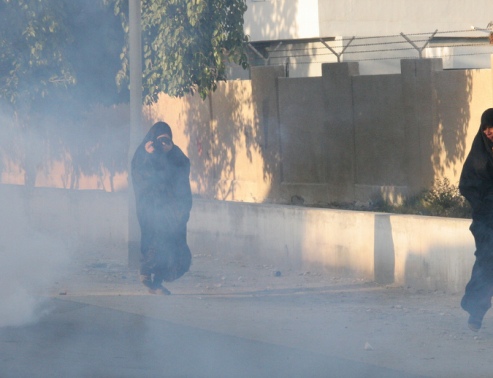 “The chest may feel sore and tight, and some individuals may voluntarily hold their breath,” said the WHO in 2004. “Exposed skin, particularly in moist areas, begins to sting and burn after a few minutes, and erythema [redness of the skin from inflammation] may follow. Some individuals may feel nauseous and vomit,” continued the WHO.

“RCAs [Riot Control Agents] can cause injury or death when used in spaces without adequate ventilation for prolonged periods, deployed incorrectly, or used against those with preexisting medical conditions,” says a 2009 report on chemical agent impacts by the U.S. Army Medical Department Borden Institute.

A large number of symptoms including burning and stinging eyes, excessive fluid discharge from the nose, mouth and lungs, involuntary spasms in the eyelid, coughing and shortness of breath, as well as other symptoms are part of the health hazards experienced from contact with CS spray or fog. Asthma attacks are also common on exposure for those who have weakened respiratory systems.

When events brought thousands of protesters to the streets outside the Bahrain Financial Harbor (BFH) towers in the capital city of Manama, one BFH employee, Fatima, was in her fourth month of pregnancy for her third child. As she and her co-workers became aware of violence that was accelerating on the streets they went to the roof of the tower building to see what the protests unfolding. Witnessing the clouds of tear gases fired at the protesters during the event Fatima fainted. She was later ushered out of the building as she was helped and protected by her co-workers. Two weeks later Fatima went to her doctor for her scheduled check up only to discover her unborn baby had died.

The unexpected death was a shock to her and a concern to Fatima's doctor because two other pregnant patients were also diagnosed with Fatima's condition that same day. What started as a diagnosis now outlines the mysterious deaths of three unborn babies.

Studies have shown that exposure to CS tear gas my have grave impacts on children. “…children exposed to the same CS aerosol atmosphere as adults will get higher doses of CS per lung surface area than adults and therefore the toxic effects of a certain CS exposure atmosphere can be more pronounced in children than in adults,” said Fraunhofer Institute for Toxicology and Experimental Medicine Head Dr. Uwa Heinrich of Hanover, Germany. His discovery on the effects of CS tear gas use was made in a 2000 commissioned study on the deaths of members of the Davidian community during use of tear gas by FBI authorities in Waco, Texas (U.S.).

Other cases of miscarriage have been linked to psychological stress as levels of personal crisis rose markedly for pregnant women. Some stress for women has stemmed directly from worry about family members. It is thought to be likely that numerous other miscarriages also may have not been reported or linked to crisis conditions of violence in Bahrain.

The level of disproportionate force used by security police has also included excessive and undisciplined acts of violence in residential areas. This has included the igniting and throwing of tear gas canisters inside residential buildings and during hours when street protests were not occurring. Police use of force has also included the triggering of sound bombs as a means to inflict harm on local communities.

“At least three deaths are attributed to the wrongful use of teargas inside residential homes, which led to the suffocation of those unable to escape in time,” says a key November 2011 human rights report, “Bahrain – The Human Price for Freedom and Justice,” by Bahrain Center for Human Rights, a human rights reporting agency that has worked to document human rights violations throughout regions inside Bahrain.

In the first five days of the large daily protests (February 14-19, 2011) the Bahrain Independent Commission of Inquiry (BICI), sponsored as an independent investigative commission by the government of Bahrian, stated that 114 cases of tear gas inhalation were reported at the Salmaniya Medical Complex. “On many occasions, the number of tear gas canisters fired at protesters was disproportionate to the size of the demonstration and the number of participants,” said the BICI in their recent report investigation. “In a number of situations, tear gas canisters were fired at private homes, in a manner that was unnecessary and indiscriminate,” continued the BICI.

On May 12, 2011 Ms. Um Abbas was stopped as her car was searched by security officials at a checkpoint during a routine commute to her work in downtown Manama. The security officers didn't know at the time she was pregnant. During her stop her handbag and mobile phone were examined thoroughly.
Um is the sister of a well-known athlete in Bahrain who is also currently in detainment. When she was stopped at the checkpoint she was threatened with arrest. She pleaded with security officers not to arrest her because she was pregnant. After two hours of questioning, which she outlined included humiliation, cursing and name calling, she started experiencing pain and cramping.
”A soldier opened the passenger seat's door and another one came to my side and they both started questioning me and cursing and calling me names, because I'm from the Shia sect…,” outlined Abbas.

After her two hour ordeal Abbas was allowed to leave. She was later admitted to the hospital where doctors tried to save her pregnancy but were unable to succeed.

“The Commission has found that excessive force was used by PSF units at the checkpoints that were set up on various roads in many areas of Bahrain,” continues the BICI in their recent report. “PSF personnel beat, kicked and physically harassed individuals who were suspected of having participated in or sympathised with the protests that occurred in Bahrain.”