BOSNIA-HERZEGOVINA: In the Land of Blood and Honey

Rape as a tool of war is uncomfortable subject matter. Not only are the stories of women in conflict unpalatable to watch on screen but they run the risk of resurrecting dormant trauma for the victims. Angelina Jolie's directorial debut In the Land of Blood and Honey tells the stories of women in the breakup of Yugoslavia, particularly Muslim women forced into rape camps and the Sarajevo siege. As Jolie put it, 'It's a hard film to watch. You sit through for two hours what many people lived through for three years'.

The screening in New York was presented by the Council on Foreign Relations and Women for Women. Under the wing of a kindly publicist, I was lucky enough to attend.

Women for Women is an organisation which creates connections between post conflict survivors and sponsors in the US. It was originally set up in the wake of the Bosian war, with the aim of empowering women survivors. CEO Zainab Salbi explained that In the Land of Blood and Honey is not simply a memorial to horrific events but that it also serves as a peace-building tool. Like the programs she runs, making connections with survivors and personalizing their stories can have a profound effect.

Salbi explains it is easy to disconnect from stories that are about somewhere else and about someone else. The emotional proximity of film is harder to ignore.

‘Angelina has made this a personal story which is so much more effective. When watching footage of somewhere far away, people feel bad for ‘the other', but these feelings of guilt should be accompanied with feelings of respect. The stories of rape were told in a way that showed the women as characters with strength and integrity, not merely as victims.'

A traditional conception of war is that men go off and fight and women are the mothers and wives who sew bandages and grieve. But this is a fallacy. In a TED talk in July, Salbi spoke of the ‘backline' of war as opposed to the frontline. In the backline women are often working tirelessly to keep society functioning. Women become the political voices on the ground, the negotiators – the peace-builders.

In the Land of Blood and Honey is a story about human nature. It tells a story of characters who are simultaneously victims and perpetrators. It shows a more complex reality where no one is quite sure who the ‘good guys' are.

It was important for Jolie that the stories were honest, and the cast were made up of a mixture of Serbian and Bosnian actors. The cast stressed Jolie's willingness to hear their stories and incorporate advice on how to make the film an un-idealized account.

While in production, the film was marred with opposition from a group of Bosnian women, who found the subject matter offensive. For the most part, it is taboo to talk about rape in Bosnia. On this point, Salbi said,

‘Any reminder triggers trauma, but discussion is part of the healing process and as an activist I am grateful for the opportunity to be able to discuss these issues. Events like this promote the sponsorship of women through our organisation in places like Bosnia and now in the Congo. It is wonderful that Angelina has used her influence to promote this cause'.

I asked some of the actors whether they thought Bosnian women are glad this film was made. . Jelena Jovanova, who plays Esma, replied,

'It was very emotional and painful to think about. But people need to know the horrible things that people do to each other. Silence is no good. People need to talk about it'.

Actress Vanesa Glodjo agreed with this,

‘Women in Bosnia are very well educated. They are doing their best to move on and are sick of cowering away from these issues… what makes me feel safe is people talking about the war in the right way. It'll move things on and prevent it from happening again'.

The Organisation for Security Cooperation in Europe held a recent conference in Sarajevo, committing to engaging women in conflict prevention, crisis management and post conflict rehabilitation in Bosnia-Herzegovena. This is in line with Security Council Resolution 1325, which calls for participation of women in peace processes, gender training in peace-keeping operations, protection of women and girls and respect for their rights, and gender mainstreaming in the reporting and implementation of the United Nations conflict activities.

Bosnia has a National Action Plan on women, peace and security, including the aims listed above, as well as an increased number of women in military and police-forces, fighting human trafficking and reducing risk in mine contaminated areas.

But Salbi, with her grassroots network, believes the action plan is not translating into reality on the ground.

‘The NAP is inadequate. Bosnia has a long way to go to realise real peace. It needs women participating in the decision making process in order to achieve this'.

Rebuilding a nation after such profound trauma is always going to be a tremendous task. But the international community has slowly dawned on the fact that women have an invaluable role to play in that peace building process. When women's voices are not at the table in all levels of government, police, peacekeeping forces, military and anti-trafficking initiative, the needs of women are simply not met.

I asked Jolie if she planned on using storytelling as a peace building tool in the future. She said she had a story up her sleeve from Afghanistan that needs telling. And that really sums it up: there are stories that are uncomfortable, but sometimes they are stories that need to be told. 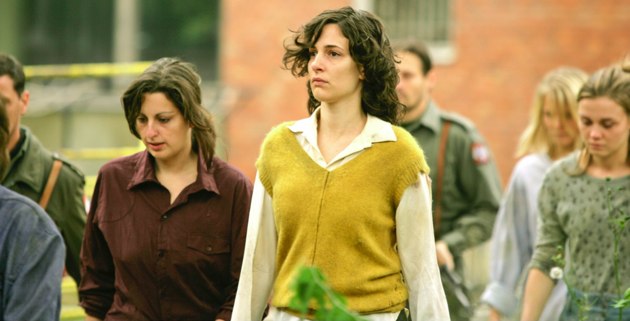