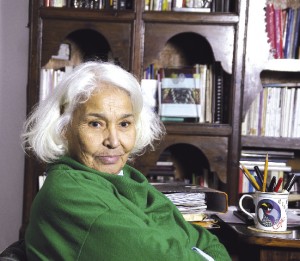 CAIRO: She may be aging, but the Arab world's most prominent feminist has lost none of her spunk. Her fierce look attracts attention as she sits calmly in her chair, rattling off answer upon answer to any question thrown her way. She is a woman who has spent her life in the service of the feminist cause. Jailed by late Egyptian President Anwar el-Sadat, Saadawi was forced into exile under recently ousted President Hosni Mubarak. Now, removed from an uprising, or revolution depending on who is speaking, Saadawi believes in her country, and its future.

“Before the revolution, the feminist movement was fragmented,” she says, in an American accent tinted with Egyptian flavor. She intermixes Arabic phrases throughout her discussion on her native land, but one thing that is apparent in her words is the hope that she and millions of other Egyptians have for the future of this country centered on the Nile River.

How would you describe women's rights before the revolution?

Before the revolution we had a very corrupt government with Sadat and Mubarak. I do not separate between Sadat and Mubarak. Under Sadat, I was put in prison and I lost my job. Under Mubarak, I was in exile and I was excluded from culture and literature, and our associations were close. The Arab Women's Solidarity Association was banned and the Egyptian Women's Union was banned by Mubarak and Suzanne Mubarak.

Why? Because they wanted first lady Suzanne Mubarak to be the leader of the feminist movement, like Laura Bush. So she banned our union, which was formed spontaneously by ordinary women. She banned that and established the National Council for Women with governmental women. Of course, some of what they did was good and was the result of the struggle of women for years and decades like the right for divorce, the law of the tribe and helping to end female genital mutilation. And also the unmarried mother can give her name to the child and he can issue a birth certificate. This is the result of our work. Of our struggle.

But what about the NGOs and the National Council of Women, didn't they help push women's rights in Egypt?

the National Council of Women, which was very, very reactionary. We had the NGOs, hundreds of them, hundreds of women's NGOs receiving a lot of funds from outside and doing very little. And they didn't have the courage, even the courage done by my daughter and her group to give honor to the name of the mother. They were very afraid. Afraid to touch on politics or sex or religion, though we were ordinary people and not afraid to criticize on politics, sex and religion. Without that women cannot be liberated. We cannot be liberated as women in a society built on class oppression and gender oppression, religious oppression, etc.

So these NGO's were working within what we can call safe areas. They say we'll do some work to eradicate illiteracy and they spend a lot of money and we see the illiteracy rate did not change (chuckle). And they say it is good to eradicate female circumcision and female genital mutilation, and they do a lot of things like that and then you see the result is very little relative to the money spent or the funds that are given.

I think many Arab countries had a lot of the same problems.

So you would argue this is part of the corrupt system that Egypt has been suffering from for generations?

When the revolution came and the women participated in it, many women were killed. Women were everywhere in the revolution. Then we had the right to speak up and gain some more rights, but what happened was there was a backlash. Why? Because we have the Salafists, Muslim Brothers, religious groups.

What do you mean by Salafists and the religious groups?

Saudi Arabia paid 7 billion for the Salafists to come and the United States and Israel are pouring a lot of money into Egypt. Why? To divide the country by religion. You know, we never had a conflict. I live here among Christians and Muslims, we never had a conflict. Now, you have a conflict between Christian and Muslim and Baha'is and Sunni and Shia. Now the Sunni and Shia and the Sufis and Salafists and the revolution became religious, the language became religious. So the religious groups received a lot of money after the revolution, especially the Salafists and they are trying to abort the revolution and make it religious though the revolution started secular. There was not a single Islamic slogan. It was secular men and women, and in fact, they were unified. Now they want to divide the revolution and religion is a very strong weapon.

How does this affect women?

Now women are suffering because they are being excluded. The high military council excluded women from the committee to change the constitution. Women were harassed on March 8, not by the revolutionary men, but by the gangs of Mubarak. I read in the media that they were harassed by their colleagues, but no, the revolutionary young men are establishing a national union of women with the women. They didn't harass them, they protected them.

The military junta canceled the women's quota in Parliament and women continue to struggle to gain positions of power. What are your thoughts?

The quota was nothing. The quota was not really something. Who went to the quota? It was government women, so we have to analyze, because we need a real quota, a real representation of women and this does not come by quotas. It comes by the struggle of women with women going to the elections and present themselves and fight.

Women in power is a struggle for Egypt, but in 2005, you put your name forward as a presidential candidate. Is this what you are talking about when you refer to women ‘going to the elections'?

I did it to show women that a woman could present their name against Mubarak. Of course the police prevented us, but still it's an historical act that women should run in the election, should go in bigger numbers. Women should organize political parties and social associations, cultural associations. Women should be in public life in every sector.

Bothaina Kamel, a former television presenter, has thrown her name into the presidential mix and has been trying to gain supporters. Is this the type of action you would like to see from women in the country?

I appreciate women to run, but not any woman. I cannot elect Hillary Clinton or Thatcher or Susanne Mubarak. Bothaina Kamel, I don't know her program. She's not even enthusiastic to join the Egyptian Women's Union. She must have a union behind her. She must have a party and not be an individual going like that; and she's a media woman. I am not against the media, but I think we need a president who is different.

Women are not behind her. She needs to change her strategy and mind because I do not divide people biologically, I divide them by their program and their mind. What program does she have in relation to women? She doesn't contact women. At least she could have contacted the Egyptian Women's Union. We don't know where she works.

Do you believe a woman could actually be elected in Egypt?

Egyptians would actually vote for a woman?

Of course. Men and women in Egypt are very tolerant toward women. I was a medical doctor in the village and I was examining men and women. You know Egypt has a history of tolerance toward women and Christianity and all religions. We are civilized, not the government.

Then what is the problem facing women in Egypt?

It is the government and colonialism. External colonialism. But if you go among people, it is different. My village supported me when I presented my name. And the men before the women. When I was a doctor there they were ready for me to examine them, so it depends about the women, her character, her program, her seriousness and if she is not a ‘feminine' woman who is having plastic surgery and things like that. If she is like a beauty queen she will not convince anybody.

Are there any men that excite you?

I am not convinced with any man. Amr Moussa? He was pro-Mubarak and obedient. ElBaradei. What's his history? Nothing. The others, what's their history? Islamic groups, what's their history? Their history is bad. Islamic leaders, their history is bad. They collaborated with the British and now they collaborate with the Americans and Saudi Arabia. So I have to study who is going to be the president by his character, his history, the program. It's just individuals running to divide the cake. They want money and authority.

But they care about the revolution and its goals, no?

Not a single one of them is really caring about the millions. And they are using the revolution. They are using the slogans about poverty, about equality, so on and so on. And nobody has a program. And all of them are political animals ready to kill each other just to have the throne.

Since the revolution, there have been a number of occasions when women have tried to push women's issues within the revolution and for social change. Often times some of the activists have said we don't want women's rights because it is inherently discriminatory and a single issue. What are your thoughts on this?

We should not separate between the political and the social. They are inseparable.

This is because women have no power. Who is fighting now? It is political muscles. The political parties who are organized and who have money, but Egyptian women don't have funds, we don't have media and we are fighting with our brothers and that's the problem of women. Whenever we are organized we are beaten by the left and the right and the government.

There seems to be a lot of negativity right now, what do you feel about the future of Egypt in the post-revolution atmosphere?

I am very hopeful because I trust the revolution and feel nobody can really conquer a nation deciding to be united and to fight and we decided to fight. The revolution is there, inside the Egyptians by the millions.

All revolutions in history have obstacles. There is not a revolution that succeeded in a few months. It takes years, even decades to fulfill its goals.