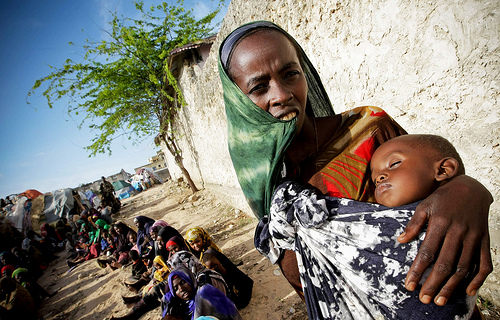 “As in the case of drought shocks, there is frequently a gendered component to severe weather risk and vulnerability,” says the Department of Environmental Affairs, Republic of South Africa, Pretoria in a recent 22 November, 2011 report.

Women in rural areas in developing countries are highly dependent on natural resources in their region, because many of their daily tasks include fetching water, cooking food and locating firewood for heating their homes. The effects of climate change, which can include drought and uncertain rainfall along with deforestation, make it harder for women to secure these resources.

Perhaps the question should be: Who faces the greatest risk with shortages created from Climate Change?

“The challenge of climate change is unlikely to be gender-neutral, as it increases the risk to the most vulnerable and less empowered social groups,” said the Office of the UN Secretary General in 2008. “In the formulation of global and national approaches, as well as in the strategic responses to specific sectors, gender awareness, substantive analysis and inclusive engagement will be necessary,” continued the Office.

Part of the issues in leadership for rural women surrounds the widespread denial of human rights with land ownership for many women in poverty stricken regions. In too many instances land ownership ends up under corrupt government control with land grabs that benefit the few. The 2011 Human Development Report (HDR), also released this November by the UNDP – United Nations Development Programme, cites a specific example in rural Uganda where community-led mapping of women's access to resources and services in Jinja, Uganda identifies corrupt land distribution along with denial of women's rights to the land. Grassroots leaders responded by setting up savings clubs and rotating loan programs, which did improve women's access to land titles giving numerous women their own ‘owned' agricultural property.

“Bold action is needed,” says the 2011 HDR in a reference made to the immediate needs for a global response to climate change.

In comparison to men who live in the world's poorest regions, rural women face more disadvantages, including limited power in decision-making. They also face the lowest chance at ownership worldwide in general. The World Bank estimates that 70 percent of the world's poor are women who have little to no opportunity.

“In many cases the poorest countries bear the brunt of environmental deterioration, even though they contribute only a small share to the problem,” says the recent United Nations report. Carbon based pollution, one of the highest contributors to climate change, is created through the use of fossil fuels. This includes oil and gasoline, coal and other petroleum based products. The countries with the most CO 2 based greenhouse emissions currently are China, which is the number one producer of CO2, followed by the U.S., India and Russia.

“Gases in the atmosphere can contribute to the greenhouse effect both directly and indirectly,” says the U.S. EPA – Environmental Protection Agency with a 2011 “Greenhouse Gas Inventory Report” that gives data up to 2009. “Estimates of future emissions and removals depend in part on assumptions about changes in underlying human activities. For example, the demand for fossil fuels such as gasoline and coal is expected to increase greatly with the predicted growth of the U.S. and global economies,” continues the EPA.

As women have the heaviest burden in their families to provide heat, water and cooking for their homes they are also more exposed to the affects of drought and floods. This also includes air and ground pollution.

When international country members met during the recent COP17 in Durban, South Africa, a contingency of 1,000 women farmers from the RWA – Rural Women's Assembly were also present outside. They protested to have their voices heard during the event.

The RWA is a worldwide association of women. RWA meetings at Durban brought 1,500+ women from South Africa, Kenya, Mozambique, Zambia, Namibia, Zimbabwe, Malawi, Sierra Leone, Ghana, Botswana, Uganda, Burundi, Swaziland and Lesotho. It also saw women from India, Bolivia, Guatemala, Ecuador, and Australia together to work on solutions, but their reach was outside the formal reach of country member states at COP17.

“No one was disadvantaged,” said one of the RWA members voicing her feelings about empowerment and the efforts made by the women.
Women from the Pacific Islands (via the Pacific Gender Climate Coalition) attended the conference through the PACC – Pacific Adaptation to Climate Change Project, which is part of the larger Pacific Regional Environment Programme.

“Gender is not only about women but both men and women as we all have to respond to the impacts of climate change and for any project or activity addressing adaptation or mitigation must be gender responsive,” says Ms. Ulamila Wragg, the Pacific Coalition Coordinator. “Apart from negotiations I am also hoping to forge partnerships that to further gender work in climate change adaptation and mitigation.”

Sustainability, the ability for improvements to continue from year to year, is one of the number one concerns for many women who live in areas where gender inequalities are real, as participation of women in national and local politics are low.

Latest data from the UNDP HDI report has found:
• Countries with a higher female parliamentary representation are more likely to set aside protected land areas. This data was assessed following a study of 25 developed and 65 developing countries.
• Countries with higher female parliamentary (and federal legislative) representation are more likely to ratify international environmental treaties. This is according to a study of 130 countries that contain approximately 92 percent of the world's people.
• Of the 49 countries that reduced carbon dioxide emissions between 1990 and 2007,14 were very high HDI countries, 10 of which had higher than average female parliamentary or federal legislative representation.

The case of former Nobel Peace Prize Laureate Wangari Maathai, who died in September 2011, is a case in point. She was also founder of The Green Belt Movement in Kenya, a movement that planted over 45 million trees. Maathai's focus on women's empowerment and leadership seems to be key to her ability in improving conditions on-the-ground.

In an answer to a question asking why Maathai took up the cause of environmentalism she answered, “It was a desire to help rural populations, especially women, with the basic needs they described to me during seminars and workshops. They said that they lacked clean drinking water, adequate and nutritious food, income and enough energy for cooking and heating.”

“…greater equality— both across and within countries— is consistent with better environmental performance,” says the recent Human Development Report by the UNDP.

“There are direct ways that women empowerment will have a positive effect on the environment,” said Lead HDI Researcher José Pineda during a one-on-one interview with WNN – Women News Network. “Many studies have found women show more of a concern about the environment and they tend to support more environmental programs.”

“Africa's food supply depends on its women farmers. But as climate change takes hold, they still lack not only information about the threat but also the resources and power they need to adapt to its impacts,” says a recent statement from Climate Change Media Partnership (CCMP) – which include journalistic media partners Internews, Panos London and IIED – International Institute for Environment and Development.

“In Tanzania there are efforts underway to give women a bigger voice in decision-making but the longer the country waits for its women to be empowered the greater the risk to food and farming,” outlines the CCMP. “While many communities in developing countries are vulnerable to climate change, women tend to suffer most yet are often excluded from processes to design and implement adaptation measures.” 2011 Gender Inequality Index.

“When we talk about sub Saharan African countries, the biggest losses due to gender inequality are gender disparities in education and high infant mortality rates and adolescent fertility rates. These are the main issues within this developing region,” outlined Pineda.

“What is interesting about this measure is when we are doing some of the composition by regions we can see the differences that need to be improved in terms of policy,” continued Pineda.

Part of the dramatic fall in ranking from one index to the next can be attributed to the roughly 16. 8 percent of federal legislative seats currently held by women in the United States compared to 45 percent of women who are part of the parliament in Sweden, which currently ranks number one on the Index. The top five countries on the list also boast between 70.1-87.9 percent of women achieving secondary education, and a 57-60 percent female participation in the work force.

Disparity is evident though for lower ranking countries. Niger and Democratic Republic of Congo, both who showed low on the Human Development Index, were among the lowest ranked also on the Gender Inequality Index with only 2.5-10 percent of all women in the regions achieving any secondary education.

“We have data on all the different regions because we don't have one instrument to solve the issues in all the regions. Each region of the world needs to be looked at differently. For example, in the Arab states, policy needs to be more engaged with women's political participation,” says Pineda.

In August 2011, a group of 12 enterprising women from Sierra Leone brought innovations to their region that may also help improve climate change in other regions, if industrial nations worked on-the-ground with the same initiative. All the women were part of a co-sponsored project with India to bring solar energy to rural village communities in the African region. One of the goals is to reach 1,500 homes with household solar units in rural Sierra Leone. The women have been trained through Barefoot College, a school in Tilona, Rajasthan (west India) that has been training many rural women to become solar engineers.

The government of Sierra Leone has also invested $820,00 to set up a branch of Barefoot College in Sierra Leone that will provide solar education to 50 students at one time during organized 4 month live-in intensives. The women hope that they will be able to run the school independently without outside of corporate and government policy politics.

“There's nothing we can't learn now to make our lives better. We have the power to change our villages,” says Nancy Kanu, who was one of the first women to train to become a solar engineer after her training at Barefoot College in India in 2007.