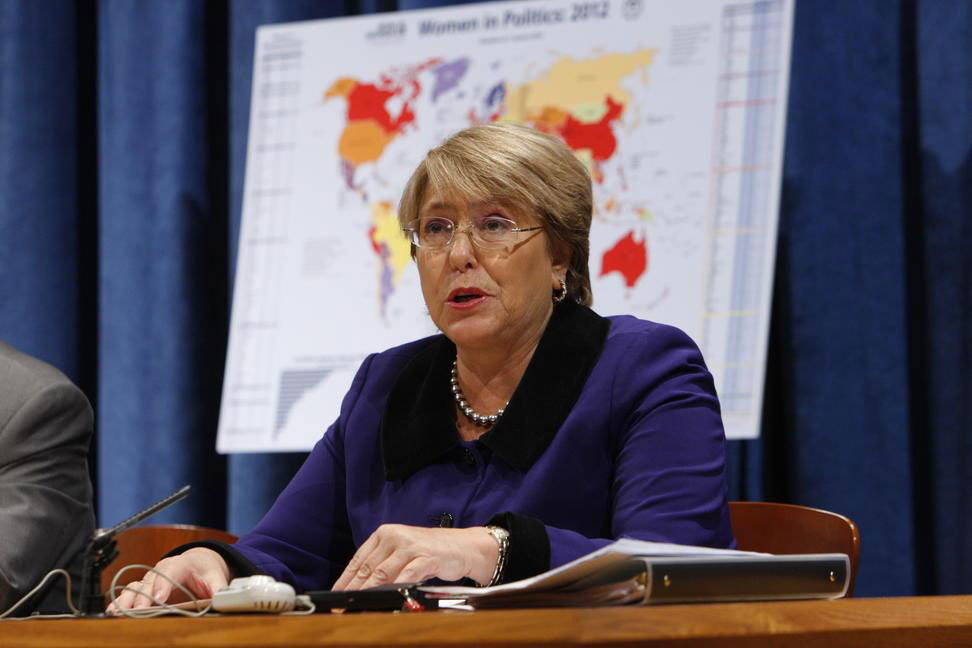 The head of the United Nations entity mandated to promote gender equality today highlighted the role of quotas to accelerate women's political participation, adding that more hands-on measures are needed to achieve significant progress on this issue.

“Today I call for stronger commitment by leaders to increase women's participation in politics,” said Michelle Bachelet, Executive Director of the UN Entity for Gender Equality and the Empowerment of Women (UN Women), during a press conference in New York.

“I encourage countries to use quotas to expand women's participation in parliament,” she said. “It is also good to open public debate about the right of women to take part in government and to hold public office. Democracy grows stronger with the full and equal participation of women,” she added.

The Women in Politics 2012 report, produced by UN Women in conjunction with the Inter-Parliamentary Union (IPU), maps the progress of women's political participation around the world in the past year.

Quotas, the report reveals, have had a positive effect on increasing women's involvement in politics. Out of the 59 countries that held elections last year, 17 of them had legislated quotas. In those countries, women gained 27 per cent of parliamentary seats compared to 16 per cent in countries without quotas.

Scandinavian countries have the highest percentage of women ministers at 48.4 per cent, followed by the Americas at 21.4 per cent and sub-Saharan Africa at 20.4 per cent.

“UN Women will support women's movements, work with parliaments to amend laws to include gender equality perspectives, and support reforms of electoral laws to facilitate the incorporation of women in elections as voters and candidates,” Ms. Bachelet said, adding that the agency will advise on the adoption of laws that include the quota system, support the training of women candidates, and work with governments to mainstream gender in ministries.

Abdelwahad Radi, President of the IPU, echoed Ms. Bachelet's remarks, stating that the joint report demonstrates that there is still too little participation from women in politics. “It's essential for all countries to make every effort possible and necessary and to take every opportunity provided to guarantee significant participation of women in politics,” he said.

In particular, Mr. Radi stressed that recent changes in the Arab world, the region with the lowest percentage of parliamentary participation – only 10.7 per cent, offer an opportunity for women to get more involved in politics as many have participated and driven the civil movements in their countries.

“Countries in transition can very effectively take advantage of reforms to guarantee strong participation of women in politics,” he said.