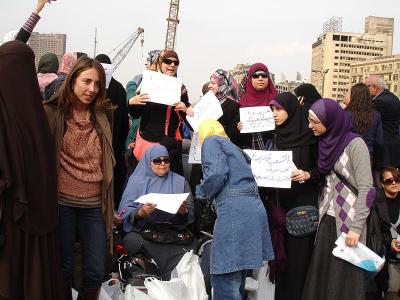 In an article written for the Guardian in April 2011, a group of authors wrote, “Women may have sustained the Arab Spring, but it remains to be seen if the Arab Spring will sustain women.” This statement is indicative of what will come next for women in the region, and how the changes sweeping the region will affect their social and political status.

Conflict often arises from unmet expectations, or incompatibility of goals. Therefore, we must consider how to manage our expectations during times of change. This can be difficult in the context of the mainstream media, which dominates discourse on Arab and Muslim women in a way that can be detrimental to the process of change.

Take for example the notion that many women who have emerged as leaders in the Arab Spring are the exceptions—rather than women who have agency, a few among masses of women who are demanding change alongside the men in their countries. In the midst of ongoing Western hegemony, a continuing challenge of those who are writing on the topic of women in the region is to approach it with sensitivity, rather than with the presumption of superior knowledge on issues that it faces, particularly when it comes to the status of women.

Orientalism continues in its most aggressive forms, often through patronization and the co-optation of issues, as well as essentialization of the Arab and Muslim ‘other.' For example, we continue to see the media sensationalizing issues, publishing countless horror stories on honor killing, female genital mutilation, and spousal abuse. Despite the important role of women in the Arab Spring and the important role that women have historically played in every Arab and Muslim society, Orientalist discourse continues to depict women in the region as oppressed, backward, and in need of a saving grace. I would like to make the case that there is a need not to communicate and report on behalf of Arab and Muslim women, but rather to allow them to speak for themselves through access to mass communication outlets. Inadequate access to mainstream media and exclusion of women's voices on the issues of importance to them is ongoing, though increasingly mitigated by the social media tools that can be accessed by users directly.

In examining the changes in the region and how the status of women will be affected, both internal and external factors must be considered. Internal factors include traditional leadership models that dominate public and private institutions, which include religious leadership and the interpretation of religious text as they relate to gender. These structures, though brought under scrutiny through the revolutions, will continue to impact their outcomes until new paradigms evolve that institutionalize broader processes for public and political participation of women.

For example, when examining women's relationships with dominant Islamic parties, the essence of the relationship must be the focus, rather than just dismissing it due to the religious values it espouses. This allows us to ask; is it one of equal rights? Or is it subservient to a patriarchal will that allows men to manipulate the idea of women's rights and politicize them to serve their goals? With limited access to scholarship on Islam by female Muslim scholars, like those offered by Amina Wadud and Fatema Mernissi, alternative interpretations of religious text remain excluded from mainstream discourse on Islam in general and on Muslim women in particular.

External to the Arab region, there is a need for recognition of the diversity in women's concerns and objectives across the Arab region. By this I mean that women in the Arab region are not a homogeneous group—their grievances across socio-economic divides differ from one Arab country to another. Some are secularist, some have strong party affiliations and some are simply managing to fulfill their day-to-day responsibilities as mothers, sisters, workers, and members of their society at large. From a cultural and social perspective, women in the region are managing change and finding ways within their roles to shape new partnerships that establish and formalize their influence and agency. We cannot assign meaning to the identities of women in the region and make a sweeping claim that all women have the same goals and unmet needs. Practitioners in the conflict resolution field, in their analysis, must frame their discussion in a specifically located and contextual manner.

In Arab Spring countries overall, we see little in terms of identifying solutions for incorporating women into formal decision-making processes in the aftermath of the revolutions from both internal and external stakeholders. An important variable is a continued dependency on foreign aid from the West, which comes to the region with outside goals that are not necessarily compatible with what is needed on the ground. Other considerations include the impact of trauma and threats of physical violence that continue to threaten women's health and mental wellbeing.

The role of women in the Arab Spring presents opportunities more so than challenges. These women have attracted the attention of the entire world and created tension within their systems by questioning and bravely challenging the status quo. Translating gains of the Arab Spring into policies that safeguard women's rights and give proper political representation may take time, but will come to fruition. In addition, the role of women in the Arab Spring has empowered Arab women in the Arab diaspora, who feel proud and emboldened by their strategies and are speaking up in support of these changing roles. This, as well as its impact on other women's movements, is a phenomenon worth tracking and documenting for future analysis.

I end this with a call for us here in the United States and for members of the conflict resolution field to re-think and re-strategize the way we engage with the Arab region in light of the Arab Spring. With a strong awareness of the ongoing challenges we face in a post-9/11 environment, I ask that we educate ourselves about the region so that we are able to stand up in the workplace, in the field and in the communities that we are a part of, against any type of bias and discrimination, and respond tactfully and with authenticity to stereotypical and generalizing remarks made concerning the Arab world and its women.

We must build different kinds of alliances and partnerships, as demonstrated by women activists from Egypt supporting the Occupy Wall Street movement. In shaping discourse about the region, we should not exclude the voices of those who make up the region and should make every effort to include and allow their direct participation in public and private forums. As outsiders and as witnesses to the events taking place in the Arab world, we can advocate for issues by partnering and supporting them in the changes that they are advocating for—not the changes that we think they should be advocating for.