MIDDLE EAST: A Woman's Touch in the Arab Spring 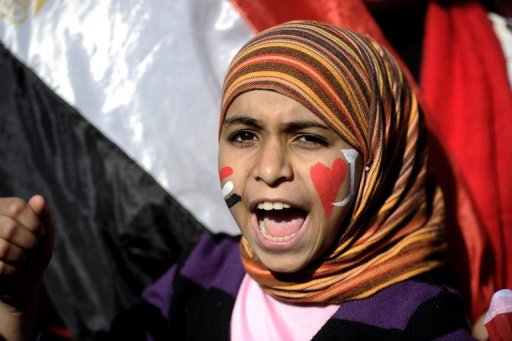 BEIRUT — An Egyptian woman beaten by soldiers, a Syrian blogger detained for her work and the first Arab woman to win the Nobel Peace Prize highlight the central role played by women in the Arab Spring uprisings.

From Tahrir Square in Cairo to Pearl Square in Manama, women joined mass demonstrations, distributed leaflets and led crowds just like their male counterparts in societies where female political activists were once scarce. "These revolts are leaderless, faceless and genderless. The women were as oppressed as men before and during the protests," said Nadim Shehade of Chatham House in London.

Challenging the stereotypical image of the housebound Arab woman, female protesters have faced tear gas, baton-wielding troops, sexual assault and have, in several cases, been killed.

In Egypt, liberal women and their conservative Muslim sisters wearing the niqab stood side by side during the popular revolt that toppled president Hosni Mubarak and is now challenging military rule.

In a society where a woman's privacy is considered sacred, recent images from Cairo of a veiled demonstrator stripped down to her bra being hit by soldiers sparked outrage and a rare apology from the Egyptian army.

In Yemen, the mass rallies staged by women in black abayas inspired such awe that Tawakkol Karman, a rights activist at the heart of protests against President Ali Abdullah Saleh, became in 2011 the first Arab woman to win the Nobel Peace Prize.

Razan Ghazzawi, a 31-year-old Syrian blogger who became an icon of the uprising against President Bashar al-Assad's regime, was arrested as she headed to Jordan for a press freedom workshop and only released after international pressure.

But protesting amid these prominent women are thousands of others whose plight has received far less public attention.

"In Syria, in 80 percent of the cases, the relatives of a detained woman do not speak out for fear a scandal," said Alia, an activist living in Lebanon.

"We must fight so that the dignity of women is no longer defined by men. This mentality will not change in just a year," she added.
One year since the start of the Arab Spring, a heated debate is already under way on whether these revolts will advance women's rights in the region.

Some argue that reforming a patriarchal culture will be far harder than toppling Mubarak or Tunisia's ousted strongman Zine El Abidine Ben Ali.

There are worrying signs already, activists said, pointing to Islamist victories in elections in both Egypt and Tunisia, while Libya's new rulers have made no significant moves to bolster women's rights.

Some fear a repeat of the scenario that unfolded following the 1979 revolution in Iran, when women who helped establish the Islamic republic had their rights curbed through the following decades under an Islamist regime.

"It will take years to know if women will gain more freedoms or, on the contrary, become more oppressed," said Sahar Atrache of the International Crisis Group, speaking about the Arab Spring.

But "the important thing is that the revolts gave rise to a public opinion and an increasingly politicised society in which women take part."