MONTENEGRO: A Round Table on Women's Rights Was Held in Podgorica

A round table hosted by the EU Ambassador to Montenegro Mr. Leopold Maurer, to mark International Women's Day, entitled: Women's Rights in Montenegro, was held in Podgorica today.

“Women's rights are an important part of the Copenhagen political criteria for membership in the EU and they are enshrined in the Lisbon Treaty, this is why the Commission addresses this issue in its annual reports on the progress of countries wishing to join the European Union, “ Mr. Maurer said.

He reminded participants at the round table that the Commission's Progress Report had noted some limited progress from Montenegro on the protection of women's rights including the issues of domestic violence and the protection of victims, but also that women remain under-represented in decision making processes.

Minister for European Integration Mrs. Gordana Djurovic said that institutions in Montenegro are striving to answer the challenge of reaching EU standards in the field of gender equality.

“By aligning national legislation with European standards and values, but also by strengthening our capacities for their implementation, we will lay the foundation for the position of women in Montenegro's society,” Minister Djurovic said.

Ms. Irena Boskovic of the Department for Gender Equality of the Ministry for Human and Minority Rights said it is evident that Montenegro does not have a sufficient number of women in decision making positions.

Participants at the round table indicated that it is necessary to change electoral legislation by introducing electoral quotas for women. Civil sector representatives pointed out that another very important law – the Law on domestic violence – will represent a milestone in protecting women's rights, but they also said that they are worried about the state's capacities to implement such legislation.

“We strongly encourage Montenegro to adopt the law on protection from violence in the family. Montenegro will, of course, also have to focus on the implementation of this law,” Mr Maurer said.

The round table on women's rights is the first in the series of planned round table discussions to be hosted by Ambassador Leopold Maurer during 2010, entitled “Talks with the EU Ambassador”. 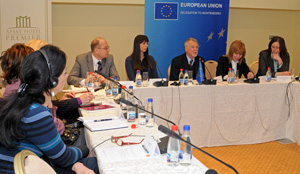