Kashmala Bibi* says her cousin's breasts were cut into pieces when five militants walked into their house and saw the woman breastfeeding her child. One of the insurgents then asked the other women around to eat the pieces.

This is one of the many tales of horror recorded in a report titled “Impact of crisis on women and girls in Fata”.

The report, released by human rights organisation “Khwendo Kor” (Sisters' Home in Pashto) with financial support from UN-women, is based on case studies of women from the tribal belt living in Khyber-Pakhtunkhwa's IDP camps.

Women in the Federally Administered Tribal Areas (Fata) are more susceptible to violence and abuse in a post-conflict scenario, whether or not they are part of the conflict, it says.

Another stark revelation made in the report is that women in camps were forced to have sexual intercourse in exchange for food and non-food items. Girls and widows were at greater risk.

The surveys from Nahqai and Jalozai camps further show that women were uncomfortable going to restrooms because there was little privacy as men constantly lurked around.

“A security officer forced me to have sex in exchange for cooking oil and pulses when I was collecting food at the main entrance of the camp,” a 22-year-old woman Nighat* from the Jalozai Camp is quoted as telling the discussion group.

The report claims that there was an increase in honour killings in which women were first raped and since the rape was considered a disgrace to the family, they were later murdered.

Forced marriages, honour killings, exchange of women between tribes and marriages with first cousins resulting in disabilities of offspring have made the women in the tribal areas increasingly dependent. The role of women in society has decreased from 39% to 19%.

Akhunzada Chattan, an MNA from the Bajaur tribal region, says that certain rituals practiced with the veneration of religion have deprived women of their rights.

“In Bajaur, the area that I come from, usury is not something against which the cleric will stand up, but if a woman demands her share of property she is stigmatised as culturally blasphemous,” he says.

The amendments to the Frontier Crimes Regulation have not significantly helped. Even now women first have to go through a jirga to seek justice. The jirga then decides how to proceed. “Women in Fata cannot directly appeal to any court of law,” says Chattan while speaking to The Express Tribune.

Maryam Bibi, the woman behind the project, who belongs to Jani Khel (FR) Bannu, says the findings of the report are based on ground realities. “Although it is hard to digest the facts, this is what the women have to go through. Someone has to speak for change.” 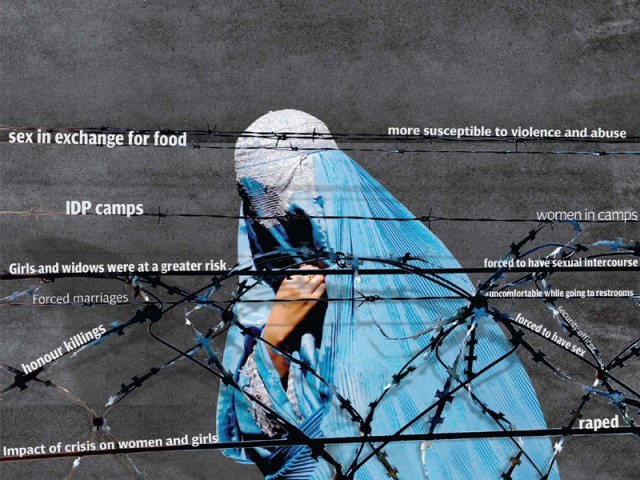