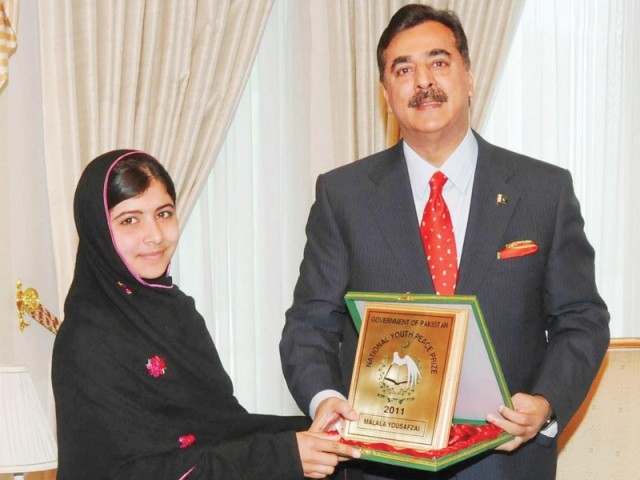 ISLAMABAD: Malala Yousafzai stood up against all odds. In defiance of the Taliban in Swat, she decided to acquire education and helped her peers to do the same. The thirteen-year-old's dauntless struggle is to now be officially recognised.

Malala, who was recently honoured with the first National Peace Award for Youth, is to now have the award named after her. The annual award will now be known as the National Malala Peace Prize. It will be presented to outstanding Pakistan youth below 18 years of age.

Earlier, Malala was the first Pakistani child amongst the top five nominees from around the globe for a peace award on Universal Children's Day. Although she didn't receive the international award, Prime Minister Yousaf Raza Gilani decided to acknowledge her efforts for the promotion of education in the extremely hostile conditions of Khyber-Pakhtunkhwa's Malakand division.

The Prime Minister congratulated Malala and her parents for her courageous stand and reaching out to her classmates to carry on with their studies in defiance of the Taliban who had banned secular education during their campaign in Malakand. She was also congratulated by the premier and other ministers on receiving the runner-up prize from Dutch Organisation KidsRights.

“I convinced my friends and other classmates of the importance of education and told them that our primary education will decide our future,” she said. “I am thankful not only to the students but also to their parents for honouring my requests and sending their daughters back to school,” she added.

On Malala's request herself, the prime minister has also directed the authorities to set up an IT campus in the Swat Degree College for Women.

For the upcoming year, Malala expressed her resolve to keep working for girls' rights not only in Swat valley but across Khyber-Pakhtunkhwa. She is looking forward to support from the country as well as the Pakhtun community in this regard.
Published in The Express Tribune, December 21st, 2011.