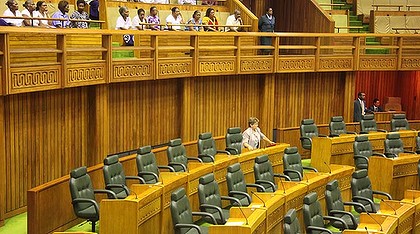 A landmark bill aimed at guaranteeing women-only seats in the parliament of Papua New Guinea has failed to get the votes required as the nation's political crisis continues.

Hundreds of excited women sat in the parliamentary public gallery, eager to witness what they had been pushing since early 2009.
But yet again the controversial bill, which faces strident opposition from the male dominated PNG culture, failed to get the numbers required - with 58 members voting for it, and three opposing the measures.

The bill seeks to set aside 22 seats for women parliamentarians. Women's groups and United Nations representatives had been hopeful the bill's momentum would continue after the first stage of the series of legal changes was passed last month in a historic vote, 72 to two.

But the bill, supported by those aligned to Peter O'Neill, one of two men claiming to be the nation's prime minister, also failed when his rival, Sir Michael Somare was in government.

The vote was rescinded and rescheduled for debate next year.

PNG's current political crisis, with the two rival camps each maintaining they are the government, saw Mr O'Neill fail to have the the necessary two thirds majority of 109 MPs required for constitutional changes.

Dame Carol Kidu, the country's only female MP who has fought courageously for this bill, cut a lonely figure as she sat in opposition benches, the only MP from the Somare camp who turned up today.

Dame Carol, who retires at next year's elections, spent most of the morning being abused by Mr O'Neill's camp for siding with Sir Michael.

But the Queensland-born former women's minister gave as good as she got, blasting her deriders for numerous examples of corruption and incompetence.

"Shame," she shouted over the chorus of heckles. "You blame us for corruption but have a look at yourself."

Chief Secretary, Manasupe Zurenuoc, PNG's top bureaucrat, held a press conference at lunchtime and referred to a government gazette that outlines that Mr O'Neill is prime minister and in government. Mr Zurenoc was flanked by the police commissioner, Tom Kulunga, head of defence, Francis Agwi, along with other senior public servants at Morautu Haus, the government's office.

"We accept the supreme court ruling that restores Sir Michael as prime minister...however in our system of government, it's a question of majority rules," Mr Zurenuoc said.

"Unfortunately despite the court order, Sir Michael is not in control of government. On the contrary it is Peter O'Neill who is in control," he said.

Mr Zurenoc said he met with the 34 public service department heads who all support Mr O'Neill. Defence Force Chief Francis Agwi confirmed reports the Somare camp tried to engage the military on Friday morning. But Mr Agwi said there never any need for an army call out.

"We told him we would not agree," he said.

"There was apprehension of possible problems, of lawlessness but this was not the situation at the time, and we said no," he said.
Sir Michael's Attorney-General, Sir Arnold Amet, approached defence because they "feared lawlessness" and a PNG National Security Advisory Committee meeting was held. Mr Zurenoc, who was at the meeting, said it was "quite possible" Sir Michael was fearing for his personal safety. It was also announced PNG's public servants, except for essential and emergency services, will be given a break after Christmas to the New Year.

Yesterday Mr O'Neill, who has maintained the upper hand in this power struggle that is lunging into its second week, told a press conference he was the prime minister and in control of government considering his clear parliamentary majority.

''The crisis is over, I want to assure the people of PNG,'' he said yesterday.

''The people of PNG have a government they love and support; that government is in control. They can celebrate their Christmas now,'' he said. ''I can assure you Sir Michael has no chance.''