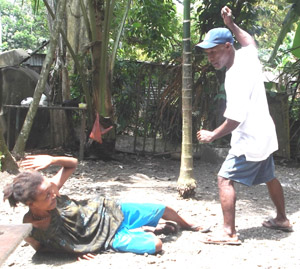 Dramatizing violence! That's the motto of the community-based Seeds Theatre Group to address violence against women and girls in the densely populated communities of the Lae District in the Morobe Province, Papua New Guinea.

The group consists primarily of unemployed youth and uses theatre as a powerful tool to raise awareness in urban communities with high risks of HIV/AIDS, crime and drugs. Funded through UN Women's Pacific Fund to End Violence against Women, the Seeds Theatre Group held 42 performances in January in public areas, including markets, bus stops and public neighbourhoods.

How does the audience react to the performances? “Some feel guilty, others are concerned, and most women learn that there is help out there to protect their basics human rights,” said Willie Doaemo, Technical Director of the group. “Many men who didn't realize violence against women was a crime punishable by law have spoken up and promised to stop beating their wives,” he added.

On the other hand, the artists themselves have gone through a learning process by reading the drama scripts and carrying out the performances. “Women are seen as inferior in our society, and this thinking has been passed on from generation to generation,” said Teddy Iwara, one of the actors. “Through the gender training, the rehearsals and the awareness performances, I am starting to respect and collaborate with my mother and sisters in our home, and will commit myself with the Seeds Theatre Group to end violence against women in the Lae District and Papua New Guinea,” he added.

With a population of 119,000, the Lae District has the largest population of the Morobe Province and is the industrial hub of Papua New Guinea, gateway to the Highlands provinces. High unemployment rates in urban communities increase the risks of crime and violence, which affects around 80 percent of the population in the district.

Mr. Doaemo expects to reach almost 70 percent of the population in the Lae District through a total of 168 performances over four months, although the group faces some challenging circumstances. The Lae District was declared a conflict zone in November 2011, when ten people were killed. Public gathering was restricted, and people were afraid to leave their homes. In addition, heavy rain made it difficult to carry out the performances. But the group improvises using innovative ways to get the public's attention: “We played loud music to bring the crowd out anyway,” Mr. Doaemo laughed.

“We are funding this project because we believe that performing arts are an effective tool to reach out to communities around the country,” said Lena Lindberg, UN Women Regional Programme Director for the Pacific. “People learn about the legal consequences of domestic violence and the support that is available from authorities, such as the Police and Health Departments, women's centres and NGOs,” she added.

The Seeds Theatre Group was established in 1997 by Sam Solomon Sommi, a theatre professional and trainer who saw the artistic talent of youth in the settlements of Lae City and started to provide training in drama, dance and music. By using traditional performing arts as a strategy for education, the Seeds Theatre Group utilizes the potential of young unemployed women and men, and at the same time raises awareness on the causes and consequences of domestic violence, sexual harassment in the workplace and bullying in schools.

The project works in collaboration with the Women and Children Support Centre, the Morobe Provincial AIDS Council, Save the Children, the Salvation Army, Ward Councilors of the district, as well as women and youth church groups.

The Seeds Theatre Group was featured in the Australian Broadcasting Corporation documentary film HIV/AIDS in PNG in 2000 and has also produced a radio drama with the National Broadcasting Commission (NBC) Kundu FM 105 on HIV/AIDS and family planning.