Recognizing that change doesn't happen through ideas alone, AWID invited the 2005 Forum participants to submit grant applications for projects that would transform ideas and perspectives picked up at the forum into projects for meaningful change. How does change happen? One step at a time, one project at a time. 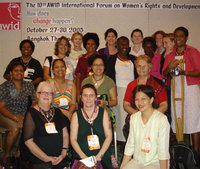 The Meri Kirap Campaign has grown out of the discussions which flowed from screening "It is not an Easy Road", the documentary about Women in the Papua New Guinean elections at the AWID Forum. It is the only footage of the 2002/2003 national PNG elections and the only series of interviews with women candidates. The response to the screening of this documentary during their Forum session "The Struggle for Free and Fair Elections in Papua New Guinea," was overwhelming according to the Meri Kirap Collective:

"Many women said that it was the best session that they had been to at the whole conference! Many women cried when the film was screening and everyone was so moved by the courage of the women candidates. Many women responded to the way that we presented together. We were told that it was a very equitable presentation and that we showed a lot of mutual respect and great understanding. One lovely woman told me that my sister, Janet presented as a woman with "great dignity." We realized then, after our presentation, that in the film and in the way that we present our experiences, that we had a useful tool to mobilize around. All the Pacific women have asked for copies of this video and since the Forum many more organizations have contacted us wanting copies and information. In several informal sessions we met with other women from the Pacific and we were greatly encouraged to go ahead with our work."

It is clear that in awarding Meri Kirap an AWID Seed Grant, they will raise consciousness nationally and internationally about the problems of women in PNG and the reasons why women want to be elected to the National Parliament. The campaign will also raise crucial issues about the security of women candidates and women voters. Meri Kirap will have a national outreach and will invite women from all over the country to participate.

About the About the Meri Kirap Collective, the Hela council of Women and the Mama Lo Stoa

Robyn Slarke is the Director of The Mama Lo Stoa (The Mama Law Store - the Constitution Training Store) and has worked with women in Papua New Guinea and Bougainville and indigenous Australian women for the past twenty years. She is a human rights activist and filmmaker. All the work of the Mama Lo Stoa is undertaken free of charge to Papua New Guinean organizations. Robyn was the only person to document and monitor the 2002/3 PNG National Elections and has been the only person training village court magistrates in the highlands for the past decade.