This September at the UN General Assembly in New York, governments and leaders will meet again to set the next global development agenda. People, especially the poor, seldom have representation in these forums. Instead, these are often dominated by the most powerful interest groups like rich nations and their corporations.

The People's General Assembly is a unique opportunity to hear the stories, demands, and vision of people from around the world who directly bear the negative consequences of neoliberal globalization, climate change, human rights violations, and inequality.

Agnes Kinaka: Kinaka represents the women of Cateret Islands to relay the experiences of the world's 1st environmental refugees. Cateret atolls have been inundated by rising tides a result of climate change, deep sea mining and the atolls topography, forcing them to migrate to Bougainville. She now works with women in her community through a feminist participatory action research project to ensure women have an active role in determining their own development path. They have established constructive, gender sensitive processes with the Atolls local government and works to empower the first environmental refugees.

Legborsi Saro Pyagbara: Pyagbara is a human rights activist and current president of the Movement for the Survival of the Ogoni People (MOSOP). Pyagbara discusses the journey to claim justice and indemnification for the victims of Royal Dutch Shell's human rights and environmental abuses in Ogoniland and the struggle for self-determination of the Ogoni people.

Poguri Chennaiah: Rural community organizer and national adviser of National Alliance of People's Movements (NAPM), Chennaiah speaks about the negative impacts to women, workers farmers, fisherfolk, Dalits, and Adivasis of a multi-billion dollar public-private initiative between the governments of India and Japan and big business to expand industrial zones across states in India.

Norma Maldonado: Veteran human rights campaigner and founder of Asociación Raxch'och' Oxlaju Aj , a Guatemalan organization to advance indigenous people's rights and welfare, Maldonado highlights the struggles of local communities against the massive land-grabbing, human rights violations, and the monopolization of seeds and plant life by foreign agro-transnational corporations and the Guatemalan government.

Marta Sánchez Soler: Soler is the executive coordinator of migrants' rights organization Movimiento Migrante Mesoamericano. Soler situates the rising migration to North America of peoples from the Latin American and Caribbean regions in the context of pervasive underdevelopment, extreme inequality, and violence in their home countries. She exposes the increasing militarization of borders by the governments of the United States and Mexico and assaults against migrants in transit.

Vernie Yocogan-Diano: An Indigenous woman (Kankanaey-Bontoc), Vernie Yocogan-Diano is a human rights and community activist from the Philippines. She is the Executive Director of the Cordillera Women's Education Action Research Center and the Programme Focal Point for APWLD's Feminist Development Justice Programme. She has a long history as a community development worker for Indigenous women and an advocate against extractive industries and corporate mining in the Cordillera region of the Philippines

Alina Saba: Researcher and climate activist with Mugal Indigenous Women Upliftment Institute, Nepal. Saba is a young, indigenous woman, one of the few from her community who has been able to access education. Using feminist participatory action research, Saba and the women from the community are working to build resilience in the face of climate change and to include women in the village development committee and local governance. She was chosen to be one of four people to address heads of state at the UN Climate Summit in 23 September 2014.

Come and join us as we collectively strive for a new development model by the people and for the people. Demand Development Justice! 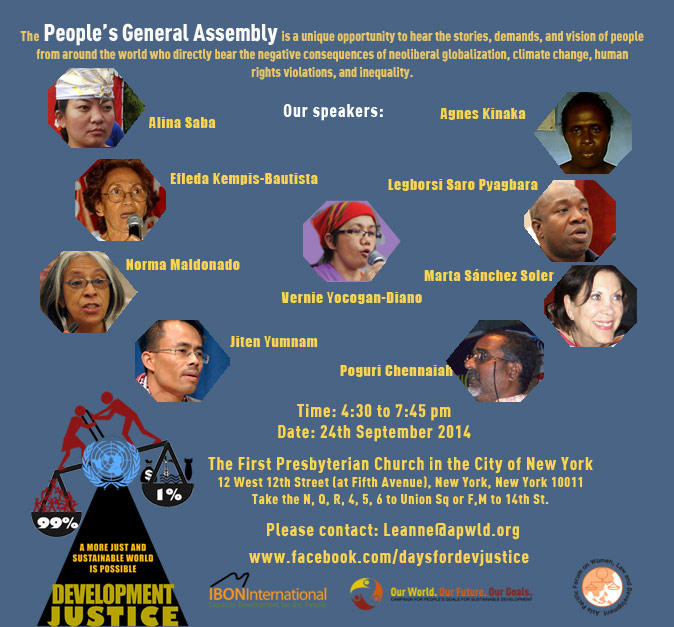