What most of us know about Rwanda – other than the fact that it is a small country in central Africa – is that in 1994 there was an horrific genocide where hundreds of thousands of people were murdered in 100 days.

Few of us know that since then Rwanda has more women in its parliament – 56% – than any other country in world. Or that Rwanda is a leading force in peacemaking, agriculture, healthcare, education and communications. Or even that nowadays, Rwanda has a fibre-optic network connecting its cities to its remote areas. 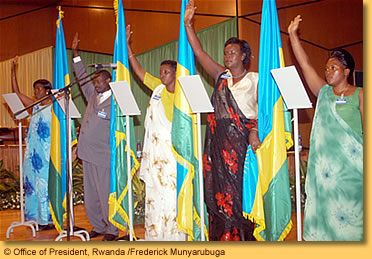 After the genocide, 70% of the population of Rwanda was female and many laws that discriminated against women had to be changed. Laws were passed to address the discrimination against women and jobs previously the preserve of men became open to women. Women also began to take a role in the judicial system and this had very profound effects. Very important changes have been made in laws governing sexual violence, marital rape, labour, property, inheritance and education.

There are still problems in Rwanda. There are many scars from the “War,” as it is known, many lives altered forever. Most of the population is rural and life for rural women is not as significantly altered as for their urban sisters – but it is changing even there. Interestingly, Rwanda is not only a better place for women since the society has become more equal, it is a better place for everyone as it is also benefitting from steady economic development.

In the aftermath of the genocide, many women who had been imprisoned in rape camps were not only traumatised they were stigmatised because they had HIV and babies as a result of their rapes. But they overcame even these obstacles because, as one woman describes it, “Since all of us had suffered from this, we were able to support each other. That is what saved us.” . . .

For the most part, men have not had too much to say about the changes in the law but according to Evarist Kalish MP, a member of the Liberal party and the chair of parliament's human rights committee, many men recognise that women may provide the best leadership.

“More than men, women are the victims of the war. They have different priorities to those of men. They have more concern about issues related to violence in general, and gender-based violence in particular. Women have faced discrimination so they want to put a stop to discrimination. All of this will contribute to preventing another genocide.”