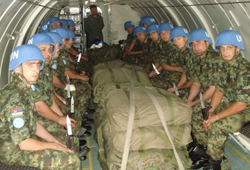 At the moment, 65 members of the Serbian Army are participating in the five UN missions in Congo, Liberia, Ivory Coast, Lebanon and Cyprus. Another 40 members are getting ready for peacekeeping missions where the EU should participate. Our own Jelica Tapuskovic discussed this with the Head of the Serbian Army Center for Peacekeeping Operations, colonel Jelesije Radivojevic.

Since 2000, the Serbian Army has been taking part in multinational peacekeeping missions. The number of soldiers who took part in missions and helped UN members with their knowledge and skills, thus contributing to security and maintaining peace in the world, has steadily increased since then. Participation in missions is a very significant benefit to the state that thus acquires a reputation in the world. Currently, Serbian soldiers participate in the five missions, and in the coming period, 49 troops will be deployed to another two missions. As Head of the Serbian Army Center for Peacekeeping Operations, colonel Jelesije Radivojevic, state for our radio, military personnel who participate in these missions have different tasks that vary from mission to mission.

"In Africa, in Liberia, our members are military observers. They report to the Force Commander, they are his eyes and ears, and collect information on the stabilization of the situation and on problems. Our doctors are in Congo - officers and medical team that support and assist the UN members involved especially in the east, where the security situation is quite unstable. To Cyprus, we have sent staff officers, military observers, patrol members and infantry whose task is to control the security situation and control of peace and truce between the Greek Cypriots and Turkish armed forces that invaded the island in 1974. Serbian Army members contribute to the security forces in Lebanon, especially in the East, "said Radivojevic.

The mission members rotate every six months or a year, depending on tasks they have. As our collocutor said, the missions also include women who are very interested in participating in peacekeeping operations.

"Right now, we have four young women in the team preparing for the mission in Lebanon. As a member of the selection board, I am personally thrilled with their enthusiastic performance, because they are truly committed and they are not as calculating as men in the decision making process," says Radivojevic.

The Government and the National Assembly decided on missions, while the Army is in charge of the training. As Radivojevic points out, the selection of the mission members, preparation, training, deployment are all governed by regulations. The main training is done at the military base "South" in Southern Serbia, while the courses and seminars are carried out at the Center for Peacekeeping Operations in Belgrade. According to him, troops face many challenges in the missions, not only in the terms of security, but health as well, since tropical diseases can be contracted, especially in African countries.

Participation in peacekeeping missions is partly funded by the state, and partly from the UN funds. Radivojevic said that the price of participation in missions depends on whether members use their own gear and equipment, while adding that members of the Serbian Army received awards for their performance in the missions.