Eight years after Sierra Leone's civil war ended, some communities have yet to come to terms with the destruction, murder and rape committed on them by their own people. Many have never spoken of what happened to them during the war and most have never confessed to the crimes they committed. Until now. A unique community healing process is reuniting villages that suffered some of the worst violence of the conflict.

The masked "devils" of the local women's secret society dance to traditional drums in the tiny village of Dugba-yeima, hidden in the remote hills along Sierra Leone's eastern border.

As the sun sets, hundreds of people from nearby villages gather around a crackling bonfire to celebrate a unique event. Eight years after the end of a decade-long civil war, people will talk publicly for the first time of atrocities committed in their communities. Most of these people never witnessed the work of the nation's Truth and Reconciliation Commission. Many have never spoken of the atrocities they committed or witnessed during the war.

Massah Jusu, from nearby Baiima village, has come to tell the story of her daughter's death. She says everyone fled when the rebels came to their village. She and her pregnant daughter were running through the bush when they came upon a group of rebels. They killed her daughter in front of her, she says. Then they slit open her stomach and took out the baby. One rebel called "Devil" chopped the baby in half with a machete. It was then, she said, that she started crying.

Jusu does not know the rebels who killed her daughter, but she is not afraid to speak out in front of her community.

The ceremony is part of a community reconciliation process led by the Sierra Leonean peace-building organization, Fambul Tok.

Fambul Tok, or Family Talk in the local Krio language, draws from traditional mediation and conflict resolution methods. Before the war, many rural communities gathered around a bonfire to tell stories, discuss the day's events and resolve problems.

Now village committees organize a special bonfire ceremony where witnesses, victims and offenders can attest publicly to atrocities committed. The aim is neither to judge nor to force forgiveness, but rather to foster understanding.

Sierra Leone's Truth and Reconciliation Commission was set up in 2002 to document the human rights abuses committed during the war and foster healing. The commission held public hearings in Sierra Leone's major cities and regional towns, but did not reach remote villages like Dugba-yeima.

"The aim of Fambul Tok is to provide space for dialogue between victims and offenders in the safe environment which is mostly in the communities. It is different from the Truth and Reconciliation Commission where they bring people to the big towns. But Fambul Tok is organized at the community level, which is the safest space for victims and offenders to tell their stories," he said.

Fambul Tok has helped thousands of people in the war-battered south and east of Sierra Leone come to terms with what happened there over a decade of violent conflict. They recently expanded their interventions to the country's northern zone.

At the end of 10 years of violent civil war, the Lome Peace Accord gave a blanket amnesty to all fighters except a handful of leaders "who bore the greatest responsibility" for the war crimes committed.

Many of those fighters were children, drugged and forced into murdering and mutilating their own people and sometimes their own families. The United Nations estimates 10,000 children were abducted and forced to fight.

At the bonfire ceremony in Dugba-yeima, Massah Jusu tells the gathering about her daughter's death. While she is speaking, a young man runs into the middle of the ceremony.

The young man is Jusu's next door neighbor, Foday Allieu. He confesses to her daughter's murder and begs her to forgive him.

Like many former rebels, Foday Allieu is both victim and perpetrator of war crimes. He was twelve when the rebel group, the Revolutionary United Front, attacked his village and abducted him and four other boys. He fought with them until the end of the war.

For him, the reconciliation process has only just begun. He did many bad things, he says, but he is asking for forgiveness.

Allieu says he was afraid of speaking to Jusu ever since he returned to the village after the war. But now, he says, if he gets anything, like money, he will give it her to help her forget what happened in the past.

Allieu would like to build a new house for Jusu, but he does not have the means right now.

Jusu says she was tormented when she heard Allieu confess to the killing of her daughter and grandchild. But she has decided to forgive him. No good, she says, can come from holding on to that bitterness. 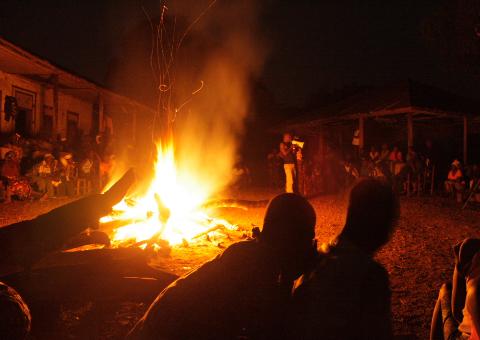