Obama earlier this week signed the most widely co-sponsored Africa-specific law in U.S. history. Supporters hope it will defend women in the Democratic Republic of Congo, Central African Republic and Sudan from further atrocities.

The Lord's Resistance Army has displaced an estimated 300,000 people in northeastern Democratic Republic of Congo since leaving Uganda in 2005 and abducted and killed hundreds of people, according to the United Nations.

Women are disproportionately burdened by the displacement, forced to take care of their famil 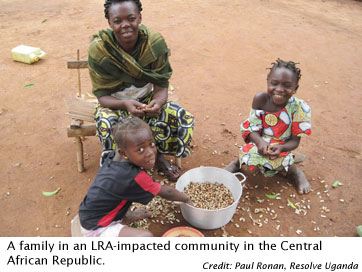 The 23-year-old extremist northern Ugandan Christian rebel group originated from tension between northern and southern Uganda, the latter where the Ugandan government is based. However, the group has not had a coherent political ideology for years and largely preys upon civilian communities in the Democratic Republic of Congo, Sudan, and Central African Republic now, according to Resolve Uganda, a Washington, D.C.-based advocacy organization.

At a May 25 signing, President Barack Obama promised to vigorously implement the Lord's Resistance Army Disarmament and Northern Uganda Recovery Act, which increases humanitarian aid for communities afflicted by the group's violence in the Democratic Republic of Congo, the Central African Republic and Sudan.

Lydia Lakwonyero, a 24-year-old journalist working for a radio station in northern Uganda, welcomes the law. She fears that the region's governments will not be able to protect people in the Democratic Republic of Congo from the kind of menace the Lord's Resistance inflicted on Uganda from 1987 to 2005, when it was forced out by the Ugandan military.

"Sometimes I can't even sleep at night. I fear for the DRC very much," Lakwonyero said about the eastern Congo region in a phone interview. She spoke from Uganda a day before Obama signed the bill into law. "I can assure you that the same thing my people suffered, they will. I definitely support the new bill. I do not trust that our government can do it alone."

"The LRA used sexual violence, rape as a weapon," she said. "During the war period, the LRA rebels particularly targeted girls in schools, abducting many. Some managed to return, but their lives were never the same."

Rights groups say that since its ouster from Uganda five years ago, the Lord's Resistance Army has been abducting women, conscripting children and killing countless civilians in the Democratic Republic of Congo, Central African Republic and Sudan, and the attacks have been escalating.

Now the group faces a potential crackdown. The legislation signed by Obama earlier this week requires him to produce within 180 days a detailed strategy to permanently end the group's atrocities.

The new law also allocates $10 million a year to support reconciliation and justice processes in Uganda, where historical regional tensions between northern and southern Uganda created an incubator for violent groups such as the Lord's Resistance Army.

The law is the most widely co-sponsored Africa-specific legislation in U.S. history, according to Resolve Uganda.

Wisconsin's Democratic Sen. Russell D. Feingold, chair of the U.S. Senate's Africa Subcommittee, introduced the bill, which picked up 64 co-sponsors. Massachusetts Democrat Rep. Jim McGovern, co-chair of the Congressional Human Rights Caucus, introduced the bill in the House, where it gained a staggering 201 co-sponsors across party lines, according to a Library of Congress legislative-tracking site.

The urgency of developing a new strategy to tackle the Lord's Resistance Army is part of what drew both members of Congress to the bill.

"Recent reports indicate that, rather than being weakened, the LRA today is stronger and strategically more sophisticated than it was just last year," said Florida Rep. Ileana Ros-Lehtinen, the ranking Republican on the House Foreign Affairs Committee, before the final House vote.

The law represents the culmination of a five-year grassroots campaign by American college students and Washington-based advocacy groups such as Resolve Uganda, Invisible Children and the Genocide Intervention Network. Forty-nine Sudanese, Ugandan, Congolese and American groups released a statement after the signing, welcoming the law, Resolve Uganda said.

From 1987 to 2005, the movement terrorized countless Ugandan women with sexual violence, slavery and abductions and abducted over 60,000 children from northern Ugandan communities, according to Human Rights Watch.

About 2 million Ugandans were displaced by fighting between the Lord's Resistance Army and the government and were forced by the government in 2001 to live in squalid camps, according to Enough, an anti-genocide project of the American Center for Progress, a progressive Washington think tank.

Women suffered disproportionately, as they faced high levels of sexual violence within the camps and were disconnected from the land they farmed to feed their families, said Paul Ronan, co-founder of Resolve Uganda.
Shifting the Operation

Since the Lord's Resistance Army was ousted from Uganda it has largely operated out of the eastern Democratic Republic of Congo, Central African Republic and Sudan, where government leaders say its forces have been diminished.

Researchers and local communities, however, rebut that. Some say brutal attacks have been underreported and could get much worse.

Earlier this year, Resolve Uganda's Ronan traveled to different parts of east and central Africa where the Lord's Resistance Army has been operating. He was heartened by the signs of rapid rebuilding in northern Uganda since 2005, when the Lord's Resistance Army was driven out. But he was discouraged by the escalation of the armed movement in the Democratic Republic of Congo, as well as the Central African Republic and Sudan.

"There's been a huge impact on Congolese women," Ronan told Women's eNews in a phone interview from his Washington, D.C., office. "There are high levels of internal displacement and they can't access their fields. Many Congolese women and girls have been abducted and forced to do sexual acts with the LRA commanders; women who escape say that's a common occurrence."

After that, the rebel army scattered throughout the region and retaliated by murdering 800 civilians, abducting women as sex slaves and conscripting children over the next two months, according to Human Rights Watch. In December 2009, the Lord's Resistance Army killed 321 civilians in three days and abducted 250 people, according to a March 2010 Human Rights Watch report.