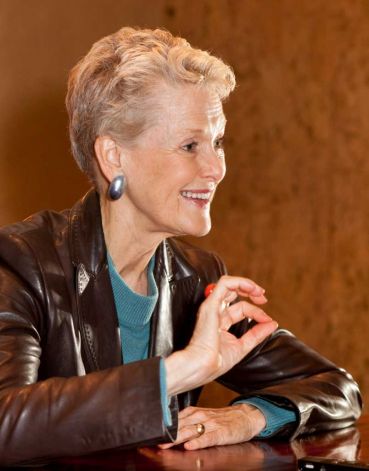 Swanee Hunt, 61, the daughter of legendary Texas oil man H.L. Hunt, is the Eleanor Roosevelt Lecturer in Public Policy at Harvard's Kennedy School of Government. In 1999, she founded the Washington-based Institute for Inclusive Security, which encourages women's participation in peace efforts around the world. The author of three books, including this year's Worlds Apart, she was in Houston recently to talk to the national convention of the Girl Scouts of America. Below are excerpts from an interview with Houston Chronicle reporter Joe Holley.

Q. Your book, Half-Life of a Zealot, describes how you got involved in peace negotiations during the war in Bosnia while you were the U.S. ambassador to Austria, and that got you involved in the power of women. Could you talk about that?

A. I had been involved with creating a women's foundation in Colorado, so I had some strong feelings about the need for women to be recognized for their contributions to this society.

But when I was in Vienna and hosted negotiations in '94 among two of the warring parties - two of the three - the striking thing to me was when we did the signing of the peace agreement in Washington with Presidents Clinton, Izetbegovic and Tudman, I'm looking around in the auditorium and there are no women. That's when the light went on.

Q. Do women bring something unique to the process?

A. They have their fingers on the pulse of the community. But they also bring different perspectives than the men. For example, they will be thinking about unified education. We can't have half the kids learning the Protestant view and the other half of the kids learning the Catholic view in Ireland; you've got to pull it together. And then finally, women are particularly good at building bridges across the divide. Often it's around our children. I have heard very, very bellicose women say, "I would not send my son into battle; we will not have a war."

Q. You came back to this country and set up a mechanism to empower women, right?

A. I went to the U.N. and said, "How come there aren't any women at the negotiating tables in Africa?" and was told, "Well, the warlords won't have women, because they're afraid they'll compromise." That, to me, was a real strong sense from the U.N. about what we ought to be doing here. I started working on this in '99. We created a network of a thousand very, very strong women in 40 conflicts, and we started pounding away on the policy makers. We've been dealing with about 6,000 policy makers, and two of our first women brought into this network were Ellen Johnson Sirleaf and Leymah Gbowee, and you know those names because they just won the Nobel Peace Prize.

Q. How did you get involved in the Liberian conflict?

A. Liberia is one of the places that early on we identified. It was raging at the time. Ellen (Sirleaf) was not the president; she was working for the U.N. and the World Bank. She ran for president later and I worked on her campaign. The way we would identify women in any place was we would talk to the American Embassy and the U.N. and the nongovernmental organizations, and keep asking, "Who are the great women that people listen to here?" And we would see which names would keep reappearing. And then we would bring anywhere from five to 10 of them for two weeks at Harvard and then in Washington, D.C., where we would be dealing with hundreds and hundreds of policy makers, exposing them to these women and making the point that the women are out there. Part of what we would do was to work with the women, so they would get used to speaking to a policy maker or the media.

Q. I want to ask you about places like Afghanistan, where women's lives are in danger if they take a public role. How do you deal with a situation like that?

Q. I also read that you're involved in yet another country - this one - where you're encouraging women to run for Congress. Tell me about that.

A. We are now 85th in the world in terms of women's participation in parliament, so we've got a problem. We've put together a leadership team with 50 women right and left - and far right and far left and middle - and the only thing they have in common is that they want to see more women in the U.S. Senate and in the governors' positions. We're now 16 percent in the House and the Senate. If you double that, you get to 32 and you've got a critical mass.