WEST ASIA: A Call for Women's Rights in Kurdistan 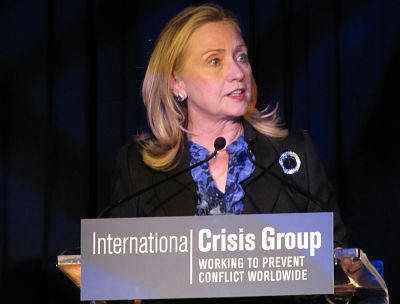 On Friday, I was at a dinner event at which prominent businessman Marc Lasry said he used to dance with and have “a secret crush on” US Secretary of State Hillary Clinton. “She was quite a dancer,” he added, while calling Mrs. Clinton on stage to speak on women's rights.

Mrs. Clinton was sitting at a different table than her husband, former US President Bill Clinton, who, like the rest of the audience, laughed. The audience's tables included Platinum, Golden and Silver, which cost $100,000, $50,000 and $25,000 respectively.

As I am not from this society, I can't know if Mr. Clinton's smile genuinely represented his feelings or not. I don't know if Mr. Lasry's comments made him jealous at all. But I am certain that even if Mr. Lasry had said his relationship with the Secretary of State was more than just a crush, Mr. Clinton, whose affair with Monica Lewinsky remains historic as much as it is notorious, wouldn't cause the same reaction as it would in a Kurdish man, who could slay his wife in an “honor killing” over such a comment.

This is, of course, just a matter of how two different cultures treat women. But the question is: Should we leave it this way merely because it is a cultural matter? In post-Saddam Hussein's Iraq, a woman, no matter how old she is, still can't get a passport without the approval of a “male guardian” – i.e. a brother or father.

In a room where the marvelous golden and silver tables had their surfaces decked with glasses of vintage wine, it gave a harmonious feeling to see, for instance, Shukri Ismail, wearing a headscarf and confidently approaching the stage get her award.
“So let us pledge ourselves to the proposition that women must be equal citizens and equal partners with men,” Mrs. Clinton said, “recognizing that the changes we seek and the aspirations of the people that we support will not be realized overnight. That's true around the world; it's true even in our own country.”

Mrs. Clinton went on to recall a number of influential examples. With hearing of each one of them, I felt sorry for women in my country. As a journalist working in Iraqi Kurdistan, I remembered the days in which murdering women became so frequent that it no longer became newsworthy.

Of the stories that I recalled that evening was the pale 22-year-old woman who had married a man without the approval of her family. She had miraculously survived an intense shooting that left her husband dead with 17 bullets in his chest. Four bullets struck her hip as well. The culprits, one of whom I interviewed, were at large.

At this time, I was stringing for the New York Times, and finally managed to convince them that the story was worth publishing and different from other typical honor killings.

Another touching event that remains with me was a young woman who was too shy to talk to me over the phone about the miserable situation engulfing her after she underwent female genital mutilation in Kurdistan. “My husband hates me. I can't fulfill his expectations,” she told a female friend of mine over the phone.

Let me be short and clear. I know, as any other Kurd or perhaps Muslim does, that there are cultural differences between the West and us. I also know when westerners such as Secretary of State Clinton talk about women's rights, they may speak from a Western point of view.

But there are certain universal things for which cultures truly need to compromise. There has to be no justification for taking the life of a woman.

Men must convince themselves that beating a vulnerable woman does not represent manhood; it rather represents lack of it. When our sisters and mothers want to work outside and show that they have more ability to serve the society than merely being confined to a kitchen, we should not prevent them from doing so. We should admit that it is wrong to determine a girl's future husband while she is still in the cradle or her mother's womb.

More importantly, we should pressure our government to enforce the beautiful laws it has passed; otherwise, the society is nothing more than a jungle where only the strongest can survive.