ZIMBABWE: Rape at the Border: How Immigration Officials Are Abusing Women in Zimbabwe

As we were growing up, we used to hear a story about Nigerian immigration that best illustrated corruption in Africa: it was said when travelling into Nigeria, you had to pay a bribe to the immigration officials even if all your papers were in order. If you neglected to pay the mandatory bribe, the official would return your passport to you and say a page was missing from your passport. 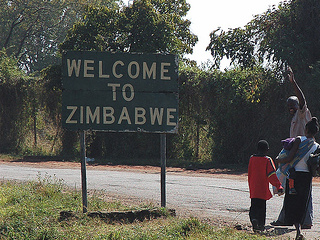 We always thought this was just a crazy story. Our country, Zimbabwe, was still okay back then – or so we thought. We have all come to realize that Zimbabwe was never okay: even as we celebrated ‘independence' in 1980, things were already going wrong. It was also said that if you threw a stone on the streets of Lagos, you were likely to hit a person with a university degree. But it seems all that education has not helped. The same goes for Zimbabwe. It was once said that Zimbabwe had the second-highest literacy rates in Africa, and we wonder why all that ‘education' has not saved the country from near-collapse. But that's not the point I am trying to make.I remembered the Nigerian tale when I travelled to Botswana recently. The borders have become congested since Zimbabwe's economy crumbled and everyone turned to the informal sector for survival. One such informal venture is the cross-border trade, mainly done by women. As I was patiently waiting for my turn at the border, I noticed that at regular intervals a woman would walk up to the immigration officer's desk and, after conversing a bit, the woman would walk away frustrated and go to a different desk, where she would be totally ignored. This would leave her with no choice but to go back to the first official, who would get up and leave his post, and the woman would be forced to follow. Let me break off to give a bit of background: as I was growing up, many years before we started noticing that there were many things wrong with our country, it was not necessary for women to subject themselves to humiliating situations like the one I witnessed at the border, because men were mostly the breadwinners and women only played supporting roles. With the crumbling of our economy, the once lucrative jobs many men boasted of became useless pastimes, and the little reward from such jobs could not be withdrawn from the banks. So the women stood up and became breadwinners, and they had to do whatever it took to fend for the family.I watched as the woman followed the immigration officer and I concluded that it was a simple case of money changing hands. Maybe the woman's passport is not in order, I reasoned. This cycle of events repeated itself two more times before someone behind me remarked that they would never allow their wives to do cross border business.‘Why?” I enquired.‘Have you noticed that it's only women who have to follow the officials outside? The men just pay the bride right at the desk.'What he was implying was horrifying, but another man joined our conservation and described all the sordid details. What happened was that as people got off the bus from or to Zimbabwe, immigration and customs officials would point out to each other the women they wanted to have sex with – and they made sure they achieved this. The officials have almost godly powers when it comes to cross-border business: It is up to them who crosses into Botswana and who doesn't. It is up to them who pays duty on goods being imported and who doesn't.In exchange for sex, passports or emergency travel documents are not scrutinized. In exchange for sex, women are given blank and stamped declaration forms and they can import as much as they want without paying import duty. It might be argued that it's not rape and women who are not interested in selling their bodies can walk away. But it's not as simple as that: the rent has not been paid, the children's school fees have not been paid and there is no food back home. A few minutes of sex can make it all go away. Is it consensual sex? I say it's rape. Just like the boss who says ‘if you don't have sex with me, I will fire you' when he is fully aware that the woman desperately needs the job.The immigration and customs officials boast about this – ‘no woman says no to me', you will hear them say; that's how everyone ends up knowing this kind of thing happens. You will not hear it from the women. They suffer in silence.